They think its all over 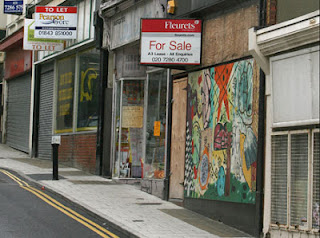 Its been a while since we had a look at the retail figures.
They have been so poor that there hasn't really been any point. But now having had a look I can confirm that the figures are not just bad but dire.

When chains collapsed into administration , a good many of them emerged from a pre pack voluntary administration arrangement in essentially the same format. they shed their outstanding tax liabilities, dumped their unprofitable leases and carried on.

It was assumed that without the burden of debts, too high rents, old units and excess stock the chains could rebuild. This does not appear to have happened.

Looking down the administration retail page is like looking at a Verdun war memorial. The casualties go on and on. Those that we rated poorly, Blacks, Woolworths, Zavvi {and Head- who bought Zavvi} have long gone. but firms that would be expected to survive have not.

Here's the casualties since the recession.

This is medium to large chains only. The 10 units or less of which there are hundreds and the sole proprietors, of which there have been thousands are excluded. In the chains alone its 150,000 jobs lost.

Lots of other big names on the list of the dead from back along.


The 2012, 6 month, casualties are of Somme proportions already.

Some of these chains have been bought by others. Some are pre pack and coming back. But even that is fraught.

Madhouse went into and out of pre-pack administration 3 or 4 times in the last 8 years. It was owned by its original owners, investment companies, rival companies and back to original owner.
It had 60 shops many on zero rent deals with a notice to quit. { If the landlord fins a buyer the tenant must vacate within 48 hours.}
Even with low debt, paying next to no rents, selling cheaply priced clothing it couldn't make a profit.
They were up for sale in the mid 90's, valued at £32,000,000.
Today the value is nothing. Its closed and the company gone.

Back in 2007/8 C@W said retail recession was survivable as long as it didn't run on & on. The fear was QE and interest rates of 0.5% would stop the depression but increase the recession length to 2-3 or 4 years. That appears to have been the case. And it looks like lasting until 2015.

The calls for a business stimulus grows ever louder.

A good read but the only stimulus needed is a swift dispatch for these failed businesses.

Scanning the list most of these outlets sell junk and low-grade materials, one step up for the street market and up against the fierce competition of supermarkets and out-of-town units.

Isn't Capitalism all about creative destruction, not propping up lame ducks?

Anon: "Isn't Capitalism all about creative destruction, not propping up lame ducks?"

Yes, but the Capitalists around here don't seem to realize that.

The model of the high street selling goods manufactured in China is coming to an end.

The High street is being squeezed by the big state, ravenous local taxes and declining inclination of the consumer to recreational shop.

For the sole trader one or two shops the writing is on the wall, rents creeping ever upwards is putting paid to them, as is the pub tenant who is having to pay ever higher rents in a falling market, managed pubs of chains (such as Weatherspoons) are the way at the moment but eventually they will circum to the declining trade. What happened to all that talk in the early 80's and what a wonderful thing if the breweries sold their pubs the prices would come down.

Anon {1} when the recession first appeared the loss of shops was mostly greeted with delight by our readers.
too many shops. Too similar etc.

I'm just back from Italy. I must have been to 200 shoe shops. I don't think I saw the same shoe/boot in any of them. Much fewer chains. Very few empty units. a much stronger high street mix. Tesco {equivalent} sits alongside a greengrocer or small Indy supermarket. Loads more cafes and bars. they have the climate.I noticed a lot less DVD/CD Video game stores and can't recall seeing them on the riviera. Maybe they have never been and Italians buy online?

What are we to do with our high streets? Parks? Council offices?

Andrew. a good point made 3 :}.
WHSmiths surprises us all. I had them to fall in the 2nd wave. they are still there and I do still use them.

Capitalism is creative destruction? Where do you get that?
Clearly, if everyone still had the same disp inc as in 2006, then most of those chains on the death list would still be there.

as to propping them up, you are partly right. But the banks close down healthy business by being risk averse. As bushiness closes so jobs are lost, so belts tighten,so spending decreases, so more close and we are back to 1931.

I really am undecided about what the government should do. If , indeed, it should do anything at all.
The worry is the 150,000+ job losses. Tesco and co aren't going to create a new 150,000 jobs for quite a while yet.

Anon {10.58} it does seem to be over. but we have been through this before. Something comes along. It was coffee shops. Then phone shops. then estate agents. Then fast food.
Now its charity shops, bakers, betting shops and £ shops.

If you only have the shops you need then you only need 1 x large tesco.
that's the US model and we will probably go down that route. A 6 acre Wallmart style shop, for all your shopping needs.

Thats 155 of the village that all survived the big crash, but margins are too low now to be worthwhile continuing. The fishmonger can make almost as much by supervising the counter in Sainsburys without any of the risk.

A village that was once rated the most desirable in 'XXXX' of england is decaying into ruralsville nowhere.

How does this square with the huge rise in retail sales volumes announced recently?

The problem is personal debt.

Low interest rates have done nothing for most people (who aren't on trackers) and were deemed better than the alternative which is to allow default and have the shakeout of bad debt we so desperately need.

This is one of the main differences between us and the U.S. They've had their house price crash and bankruptcies..

Julian Graves suffered from EU interference combined with the big pharmaceuticals stuffing them.

Peacocks is alive and well in Kuala Lumpur. Still selling the same clothes they used to sell in Ramsgate.

Where does the ££B of JSA, DLA, CB, etc. get spent? Claimants are making sure Primark is expanding!

Waitrose reacted fast and have the brand match to keep the middle-class drifting away to Tesco (and by having young gels called Emma and Hannah on the tills..)

M&S, oh dear. Not sure what buyer it's targeting, stock control STILL iffy,...

But now having had a look I can confirm that the figures are not just bad but dire.

And yet we're told, bill, that things are on the up and the work is out there, people are buying on the back of the Olympics etc.

Poujadists of the world, unite! We have nothing to lose but our retail chains.

Expat: Peacocks is still alive here in Chippenham and along with Clinton cards too! Not sure what's going on..also some shops opening (small independents and a Cafe Nero) whilst others are closing. I think Mary Portas may have had some influence here.

"most of these outlets sell junk and low-grade material"

Absolutely - stuff nobody needs but which some will buy when times are easy and money plentiful. Well, now they're not and it isn't.

Some of these business sold stuff people actually need but in most cases the internet provides a better service.

We simply don't need shops any more for a lot of things, why not just accept it?

BE - Some are up, some are down. Supermarkets with rising food prices are always going to be up. + as they take over other areas they grow share. EG..greetings cards. ome have huge ranges now where before they were small. Clintons is gone so Tesco and chums pick up the excess.
But overall its dire. Weather and recession have done for quarter 3.

EK : Thats about right. But the US debt went onto the feds books.Julian Greaves? Hated those shops.Stank.

Expat. I saw Intersport in Switzerland. They've been gone for years.

Anon:couldn't agree more. When I wrote at the very start of the recession that Waitrose would be hit got comments disagreeing. After a lot of posting i said "I'll bet you £1 Morrisons and Asda will increase share
and M&S and Waitrose will lose unless they cut prices.
not much of a prediction really.It was obvious.
Now i think of it that commenter owes me £5.

JH: Hi! Nothing is on the up. Except the supermarkets. that's the pattern for the next few years.

Jan. I'm doing Portas review talk later this month for one of the regional councils. There's not a lot to cheer. And the regeneration budget is too small to really do much except in the chosen worst towns.

my point was that in Italy and France the shops don't sell a lot of crap. they sell lots of clothing as both nations spend a lot more money on a lot less clothes than we do.

But we are a cheap nation. Always looking for the least expensive. And that, at present, means Chinese and Indian goods.

What do we do with high streets if all the shops close? Imagine a doubling of council tax {at least double..maybe triple} to pay for the loss of business rates to councils.

Add 2 million unskilled and semi skilled to the jobless.

we do more retail than manufacturing. To say move it online is like saying move ll of our industry overseas.