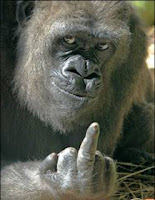 Yes, a tired old philosophical question but hey, that's my thing and it's sometimes interesting to rehearse it when you see things like this.

That heart-warming article + commentary came up just after I'd been having some dialogue with our old friend Sackers (in comments here) on Nietzsche's view of consciousness - "consciousness is a surface" - which can seem a bit odd without delving into it a bit.

Anyhow, Nietzsche (along with many others, of course) reckons that language sets us apart from animals, and that consciousness is born of the need to communicate.  But unlike, say, Descartes, N sees it as a matter of degree and would, I think, allow animals consciousness in proportion to their ability to communicate.

Which leads us to a further question:  can we understand them ?  Wittgenstein says no.  I disagree, provided that due scholarship is deployed and the easy traps of anthropomorphism are avoided.

Think on! And a good weekend to all.

i think it's pretty clear that consciousness - or the ability to think - is not a binary thing that you either possess or don't, it's a spectrum

animals have some degree of consciousness, a degree that varies across species, across individuals within species, and across times within a individual lifespan.

Re the picture. Digito ergo sum?

Remind me what this blog is for?

Come off it Nick, you've seen The Incredible Journey haven't you? Of course they think.

My dog has 10 braincells: 4 engaged with eating or cadging food; 2 with defecation; and 1 each for barking, tail-wagging, flea-biting and stick-fetching.

Of course we communicate - she's just at my level.

I wonder if that gorilla is all american bred, not a true Brit sign. If you have a dog and you do not feel very well just look at the dog's eyes questioning silently,if that happens in a dog why not in a bonobo, chimp or gorilla they pick our feelings, they cannot speak but they can question you with their eyes or even show contempt for someone they dislike with signs, even those signs they see humans using.

Yes to both questions.

a bit succinct Kev, have your railway essays exhausted you ?

Budgie, this explains everything: but you really should ask her to reconsider her policy advice on nuclear power

Lil - indeed, the 1963 version, and was mightily impressed as a youngster: that bear !

Bogotol, I am inclined to agree: across individuals within species: as amply evidenced by Mr Q's QT quiz ...

Hi all. I'd be the first to admit I know little about the philosophy behind this, but I remember seeing a fascinating documentary about primates that had been taught to sign in the US. I'm not sure if this chimp was in the film, but you get the general idea... [link to wiki : http://en.wikipedia.org/wiki/Washoe_%28chimpanzee%29].

Now, I don't know if the fact that they weren't using their own language invalidates any of D or N's starting positions, but they [primates] certainly appeared to be communicating successfully with the human researchers...

Bogotol has it right in stating that consciousness is a spectrum.

Nietzsche (I believe) has it the wrong way around. Consciousness comes long before the ability to be able to communicate or organise thoughts into words - this is where emotions such as anger and frustration come in - an awareness that something has gone wrong but an inability to marshall thoughts in an ordered way and and assign to them their proper importance or to win an argument.

The inarticulate animal will experience their thoughts as imagery and impulse. Though there are no words attached to them the impulses remain a manifestation of thought nonetheless - a clear awareness of recent past and term memory and its implications for the present are demonstrated by all mammals - an ability to hold long term memory is demonstrated by most mammals. That is where our affection and attachment to cats and dogs comes from - it is their affiliation to us that we find so endearing. Their thoughts about us - the wagging tail on returning home from work ... the brushing against the legs when arriving in the kitchen at breakfast.

Language is a consciousness raiser for sure. It accelerates learning and awareness and that is why education is so important - not just to accumulate knowledge but to enable a higher order of thinking, consciousness and neurological development.

- a clear awareness of recent past and *short* term memory

Babies cannot speak; presumably we wouldn't consider them to be lacking in consciousness? E-K has it right, I think.

HG - Xmas will do nicely
EK - I am very glad I provoked you
gsd - broadly agree
MW - that is indeed short ...
SW - as well as allowing for animals, Nietzsche also allows for pre-speech infants in the same way, i.e. matter-of-degree

(there is loads of work on development in infants, of course, and it does suggest full human consciousness comes slowly)

we have reached broad consensus so quickly, I can see us tackling some other knotty perennials in future weekends

(or back to railways, of course)

At Eurostar I was known as Forest Gump.

B) For my apparent vacuity.

I have a dsyfunctional memory and negligible capacity for remembering names and directions.

I was hopeless at finding my way on emergency calls during my time in the police and found railway tracks very useful when I switched jobs.

... that I was unable to join in conversations because I couldn't remember anything didn't mean that I wasn't capable of thought.

I think I know how our hairy cousins feel.