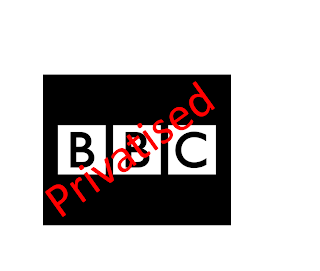 I nearly put a question mark on the title but realised that would only make it a rhetorical question. The BBC has been brought low by two appalling decisions recently. One not to explore its own history with Jimmy Savile and the second to join in a Labour-inspired (yes, that is you do the inspiring Tom Watson) piece of crazed journalism implicating a Tory in a paedophile ring.

This really stinks of the worst days of Damian Mcbride and shows how many on the left-wing in this country will believe anything they are told about Tories, I guess this is why the moniker 'baby-eaters' has stuck.

However the BBC is meant to be a non-political organisation, indeed its TV news broadcasts are forced by law to walk the middle line. Now we all know that Channel 4 News has this mandate yet manages to bend most stories round to a very left-wing approach. Yet in the Country as a whole, right-wing media outsell left-wing media. But somehow the BBC manages to host a huge amount of left-wing bias and to my knowledge no right-wing broadcasters or journalists at all. It news reporters focus on cuts and austerity and as a huge state backed institution it instinctively backs all moves to bigger Government and the status quo which sees us all pay for its existence under threat of fines and imprisonment.

If people in this country were top be freed from having to the pay the TV licence then this would change overnight - it would have to for the realities of a commercial existence would mean the BBC was unable to ignore such large parts of its potential audience or else it would have to shrink quite rapidly. I would imagine in reality the latter would happen and the BBC would retreat to its left-wing core and let other organisations step into the breach.

For the Country as a whole, the subsidising of our TV, Radio and Internet services is simply not needed. We don't need every recipe in history stored for free on a BBC website. There is plenty of scope to reduce the influence of the BBC. Commercially, the organisation would thrive given its brand and quality of production and understanding of its audience. Yes it would be smaller, but more attuned with the needs of its audience and host country. The opportunity for international expansion would open up too.

Finally of course, everyone in the Country would get a £130 tax cut which would be nice and stimulative to the economy. So when can we see this Bill in Parliament?
Posted by CityUnslicker

I agree. But there's another crucial point: a business making these mistakes would be out of business.

But the BBC is bombproof thanks to its unique subsidy. The endless, unbreakable revenue stream means it can hire legions of timewasters that others cannot afford meanwhile everyone is safe in their job because nobody cares about costs.

In their biased desperation to have the words "Tory", "paedophile" and "Thatcher era" in the same headline they clearly suspended all critical faculties. Never mind resignations. Where are the sackings?

lots of non-sequiteurs flying about this morning.

surely recent experience shows exactly the opposite? Its been a 30 year race to the bottom in Fleet St

al-beeb was all over the cuts narrative at the outset of the coalition, and has been pretty tight lipped about the new NHS reforms

'a business making these mistakes would be out of business'

G4S, Barclays, HSBC, News International? Christ, what about ITV!? Old schofield must have breathed a massive sigh of relief. Cameron would have been perfectly entitled to boot him up the backside for that stunt.

frankly, its the managerial culture that needs to be cut at the BBC. far too many deputies and assistants all covering their own backs.

This spectacle of the media covering itself and politicians acting holier than thou is pretty shabby. Lets remember the ordeal that a group of youngsters were put through and the systematic failings since. see also Hillsborough. It is getting pretty clear just how low normal people are regarded by these 'elites'

Interesting factoid - apparently Michael Crick was at the Oxford Union do where the 'Bureau of Investigative Journalism' delivered its intention to call McAlpine a tamperer and Cricky, erstwhile of Newsnight for oooh - 20 years at least, asked the guy 'is it McAlpine?' the guy let it be known that no other name was in the frame. And then Cricky phoned McAlpine. He didn't phone the BBC's management, he didn't phone the editor - he just thought screw you Al Jabeeba, up yours.

It's that kind of man management that delivers a kind of coup de grace. Although, I do have a disturbing crush on Allegra Stratton whereas if Paul Mason was my 6th form economics tutor we'd have been complaining to the vice principal that he's clearly a blethering ejeet.

You wouldn't get the tax cut of £145 though. BBC wouldn't be on freeview for nothing. It would be a premium channel, costing about ..£145 a year.

"Finally of course, everyone in the Country would get a £130 tax cut "

Except those who, like us, won't have a TV in the house.

Would Guardian readers be happy having to pay for Fox News simply because their sets can receive it ?

Whether you do is a matter for you.

But it would be nice to have the choice.

My comment turned into a blog over at mine.

roym - all fair points. but shreholders would demand who change and enforce it. The bbc will lose a few heads and carry on.

NewsInternationl - they cloosed the News of the World remember. RBS closed the investment bank.

Agree re Schofield though, he has gotten away with that.

I would not pay for the BBC. I'd take the tax cut.

Roym also, disagree re the cuts, they were all up for it until they miniscule cuts actually started then it was all, rich get off free whilst diabled are made homeless/penniless.

How many pilgrims does the BBC have I wonder?

I think the Beeb was twitchy about Savile and so quickly pointed the finger elsewhere in best "Crucible" style.

If you read Anna Raccoon's remarkable blog posts, it may be that Peter Rippon's decision to pull the original Savile documentary was quite correct.

Would privatising the BBC improve journalism ?

The point is that we shouldn't be forced to pay for biased journalism.

12/11/12 - Dear Fucking Diary - That was the best episode of Newsnight ever! Universal Shami Chakrabatti was arseholed. More of the same!

which, curiously, never seems to occur to anyone else

It is impossible for anyone (hence impossible for the BBC) to be unbiased. The BBC's bias is evident in its selective use of journalists - so many from the Guardian. Where are the journos from the Telegraph, Times, Sun, Express, Mirror and Mail? Are they used in proportion to those newspapers sales? Thought not.

The BBC, is a semi-monopoly because of its hypothecated inviolable tax funding. So it acts like a monopoly: ignoring its customers and descending into corruption and bias. The BBC is rotten. It must be sold off as a pay-to-view business.

@budgie:
I suspect there is a large compliance team monitoring the situation - producing comprehensive reports on a monthly basis - and they making sure that for every guardian journo you hear @8am on the Today program, there will be a Telegraph journo @3am on the world service to balance.


So thats ok then.

Very late to the party but Oi!!! Hands off my BBC! Keep it funded the way it is, let it take risks in its programming, it usually works. So it makes the occassional mistake, let it. What will you get instead? ITV 5? You want that?? If you don't like its journalism don't consume it, it probably only costs about 0.00000002% of the fee anyway. Or maybe more but you get my drift.

"" However the BBC is meant to be a non-political organisation, indeed its TV news broadcasts are forced by law to walk the middle line. Now we all know that Channel 4 News has this mandate yet manages to bend most stories round to a very left-wing approach. Yet in the Country as a whole, right-wing media outsell left-wing media. But somehow the BBC manages to host a huge amount of left-wing bias and to my knowledge no right-wing broadcasters or journalists at all. It news reporters focus on cuts and austerity and as a huge state backed institution it instinctively backs all moves to bigger Government and the status quo which sees us all pay for its existence under threat of fines and imprisonment.""