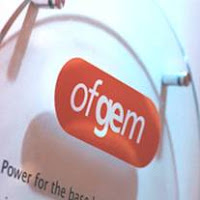 A short while ago our esteemed correspondent Mr Wendland (comments, here) remarked on an alarmist presentation by Ofgem's outgoing Alistair Buchanan, which has certainly made some waves.  You can find it here.

And what a bizarre offering it is - you'd guess it was an A-level student's course-work, all wonky screen-grabs, childlike graphics and spelling mistakes.  (Is he deliberately cultivating an air of 'EnergyUnslicker' ?  Does he imagine it make him seem more authentic ?)  And so self-serving: OK Alistair, we'll remember you always warned us about the lights going out.  Question is, why haven't you done anything about it ?

Anyhow, to business.  Of his 72 amateurish slides, we can only really hit some headlines, and first up is his bizarre floating of the idea that maybe the Large Combustion Plant Directive (the EC regulation that will see the closure of gas and oil plants in short order, the proximate cause of our steeply-decline electricity capacity margin) can be flouted or thrown into reverse (slide 15).  He tentatively offers 5 reasons why this might not be so easy as red-faced Telegraph readers always assume, but he's missed the main point.  The LCPD,  the original version of which dates to 1988 and the present version 2001, has been in effect,and therefore built into everyone's plans, for a very long time.  Plants that will shortly be shut under the Directive were always earmarked to be sweated (as indeed they have been) and for years now, as well as being hammered, have not been given the kind of ongoing maintenance required to keep them going any longer.  When they finally remove the ignition key, they will need to sprint to the gate as the plant collapses in dust around their ears.

Turning to Mr W's notes: Buchanan observes that 'GB has no Public Service Obligation' of the kind that automatically over-rides cross-border free-trade principles in gas and electricity.  At the time I commented that GB certainly puts several public-service obligations on UK suppliers - this is particularly true as regards residential customers - but I accept that they are not the blanket export-banning guillotines that most EU countries have up their sleeves. (In this regard I have written about French and Dutch behaviour here, and the Italians are just as 'bad'.  But of course some of our other C@W regulars - especially Budgie - reckon this is just fine and to be accepted.)  So Buchanan's point stands, as far as it goes, and his one-liner is a fair and sobering one for all of us (slide 68):  "relying on markets being flexible is hard".

Mr W also picked up on Buchanan's Gazprom quote (slide 32) of June 2009: "We [Gazprom] have always invested inproduction and transportation as much as needed to meet already signed contracts and not focusing on demand forecasts…As a result Gazprom has enough production capacity but does not suffer from surplus". However, June 2009 was exactly when Gazprom's exports were cratering due to the recession, and they were whistling loudly in the dark - we've covered the saga periodically since, and suffice to say the statement rings very hollow today.  Their current public stance is that the surplus - oh yes, they have one all right - is purely a transient phenomenon.  Meanwhile they are busily paying out big cash rebates to European utilities to keep them sweet....

Overall, Buchanan's piece was most commented upon in the media for its warnings over (a) the lights going out - no news there - and (b) availability of gas for importing to the UK.  His 'analysis' of the LNG market is not very sophisticated: but no-one can deny the concerns over the security of Qatari production with Iran sharing its largest gas field.

But the UK will be dependent on gas imports under every feasible scenario for decades to come: the only question is over the precise quantities.  Yes, perhaps new nukes, and new coal (in a different policy environment) may some day reduce the absolute gas requirement, but not any time soon.  There is no point wishing it were not so: the only thing that matters is making it work.

Where Buchanan can truly be lambasted is the over the feebleness of his comments on international gas trade and the need for very purposeful development of market mechanisms (as I wrote here 5 years ago ...).  He hints at question-marks over European gas-market integrity (e.g. slide 67) and lamely states: 'Need Answers' - well yes, but on whose watch has this happened ?  Why hasn't Ofgem been a dynamic and proactive force in these vital matters ?  Where's your report on the gas index-fixing allegations ?

We are not impressed.  If, as is rumoured, the great maverick Ian Marchant is indeed being lined up to replace Buchanan, you will hear a great cheer from around these parts.

you just don't understand, do you BE ?!

join the DoubleThink club & everything will become clear

This is a very odd government?

Subsidy here, subsidy there - but cutting "hand-outs". Free market here, regulation there - its all the EU's fault.

Since they have managed to curb fuel usage by taxing it, I assume they will continue to do so in even greater amounts than planned.

And if the smart tax accountants managed to save a bucket full, you could always "name and shame."

Are there any capable politicians?

Just to add to the above. From Otto's master.

While discussing the Green Deal, Barker discussed the perception that the interest rates for Green Deal loans were too high. “Now, some people have said: ‘6.9 per cent – gosh that’s a huge interest rate, why would anyone go with that?’ Well, the fact of the matter is 6.9 per cent is just about the most competitive long-term interest rate that you can get out there in the market anywhere. It’s not right to compare 6.9 per cent with a variable rate mortgage. People have said: ‘6.9 per cent? You can get a mortgage for 2-3 per cent.’ You can, but that rate is only guaranteed for a year, or two years, or it’s variable.

The only way a long-term 6.9% can be reasonable is where underlying inflation is at or above this level - or fuel costs are going so high, the payback can be achieved.

And we put him in charge of the main energy policy!

ND said "Question is, why haven't you [Buchanan] done anything about it?"

Good question. He is like all of the current crop of the great-and-the-good: when something goes wrong that previous generations would have resigned over, they whinge and complain as though they were the victim rather than the perpetrator.

ND said: "blanket export-banning guillotines that most EU countries have ... French and Dutch behaviour ... the Italians are just as 'bad'. But of course some of our other C@W regulars - especially Budgie - reckon this is just fine and to be accepted."

You have also confused what is desirable with what is. What is, is that only the English (perhaps the British) think that there is something reprehensible about Jonny Foreigner putting his own country first. You may not approve, but it is true nonetheless and you have to work with it.

The europhiles have a slogan that says Britain is better off in the EU. Yet with "ever closer union" there will come a point when Britain ceases to exist as a nation in any meaningful way. By definition it is impossible to benefit a nation that doesn't exist.

The English used to be patriotic (see Dr Johnson) but it is no longer fashionable. Ignoring or even putting down your own country probably derives from unconscious Marxism, and is only a fairly recent dogma. Hopefully, like all fashions, it will wither away quite quickly.

Budgie, you are way too pessimistic

some very laudable progress has in fact been made on EU cross-border energy trade - all driven by the Brits: our approach has been adopted by the EC itself, and national energy regulators are, one by one, getting the idea

so I was being harsh on Ofgem, and I still am - I will grant them they've been a 'voice' on the side of the angels, but in several ways not proactive or smart enough, and haven't done enough on liquidity or market integrity back at home

"The English used to be patriotic... but it is no longer fashionable"

Absolute crap. Do you actually live in the UK?

BE, which sentiment is crap, the used to be patriotic, or the no longer fashionable, or both? If you have an actual point to make it would help to include some reasoning.

I referred to Dr Johnson as a typical era when the English were patriotic. I have boys annuals from the 1930s which are overtly nationalistic. Yet nowadays patriotism and nationalism are regarded as weird if not reprehensible. Whether it is immigration, the EU, how much our industry is owned by foreigners, or many other areas, anyone putting forward a UK first view is denigated without attention to the merits of the point.

"" A short while ago our esteemed correspondent Mr Wendland (comments, here) remarked on an alarmist presentation by Ofgem's outgoing Alistair Buchanan, which has certainly made some waves. You can find it here.

And what a bizarre offering it is - you'd guess it was an A-level student's course-work, all wonky screen-grabs, childlike graphics and spelling mistakes. (Is he deliberately cultivating an air of 'EnergyUnslicker' ? Does he imagine it make him seem more authentic ?) And so self-serving: OK Alistair, we'll remember you always warned us about the lights going out. Question is, why haven't you done anything about it ? ""