One in four people are... {add your own vested interest here} 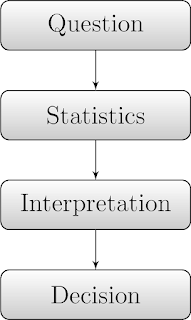 From Wiki - The number of people taking out payday loans in the UK in recent years has increased fourfold, to 1.2 million in 2009. The latest 2011 info on Stella's own webpage has a figure of 1.3 million individuals in the UK taking out a loan. That's a hell of a growth if she is right..which, of course, she isn't. In London payday loans would have risen by some 1000%. A rate of increase even the payday loans companies themselves would envy. As the report she quotes goes on to say the insolvency practitioner in November 2012 showed 5 million adults in the UK are considering taking out a payday loan in the 6 months to May 2013.
What a useless statistic. The car salesman would be rich on commission if he could bank all the people thinking about buying a car as actual sales. And that 1000% increase in payday loans in London. I just guessed a %. You're not going to check. Which is what the problem is.

I've no idea what Stella really meant to say but what was disturbing was that the interviewer, Julia Hartley-Brewer, didn't pick up on it. So its 1 in 4 Londoner's taking out a payday loan to help pay for food and nappies. What an evil society we live in when a quarter of all families in one of the richest countries in the world has a system that means a full 2.5 million citizens in its capital city must take out a loan to eat.

There was a figure on Question Time the other day that said 1 in 5 women has been raped. I queried it on Twitter and met with some strong tweets saying how rape is unreported. Women suffer terribly and the real figure is nearer 1 in 3.
Ok.
But 1:5 women being raped means what? 20 million rapists in the UK? 10 Million? Its an insane figure that cannot be true. Wiki again: According to a news report on BBC One presented in 12 November 2007, there were 85,000 women raped in the UK in the previous year.
2013 census has 28.5 million women registered. Take out the under 16s and call it 20 million. 1 in 5 is 4,000,000 rapes. That's a 4700% increase. We'd have noticed, surely?

The disabilities agencies claim between 10 and 12 million disabled people in the UK. Around 1:5 of working age adults and 1 in 2 of pensioners.
There are 44 million drivers. There are 1.3 million tax exemptions from road tax granted.
That exemption is available not just to the disabled person, who might be blind or otherwise incapable of driving, but to the partner, parent or carer of the disabled person. So 1 in 5 begins to look suspicious.

Unless, as in all these examples, every possible permutation of the statistic is included, the figures cannot be correct. Colour blindness and stammering and baldness as a disability?
Felt up once in a pub counts as rape? Agreed to have a session with their partner when not in the mood?

Why do so many bodies use such nonsense figures that are so obviously at odds with the real world experience. If these figures were correct ALL of us would know a disabled lesbian, living in poverty who has been raped and recently taken out a payday loan. All of us..not just one of us.
There would be one such person in all our families. And one rapist too..who is also taking out a payday loan.

Its a headline. And the media often allow the statistics to go unchallenged. Owen Jones was very, very surprised when Andrew Neil told him that no member of the cabinet earned a million pounds a year. Poor Owen. No one had ever questioned one of his assertions before.

Statistics!
Don't believe a word of any of them.

{Homosexuality figures fell dramatically to about 1 to 1.5% in 2010 after new research. Worse news for Dave then.. He's pushed 20% of former Tory voters to UKIP trying to catch 1% of the national Gay vote. Or maybe its 1% to UKIP out of 20% of the national vote..who the hell knows? Or cares..Just make your own up..No one checks.}

Email ThisBlogThis!Share to TwitterShare to FacebookShare to Pinterest
Labels: nothing of importance

Well done for picking up on this. Statistic misuse has been a bugbear of mine for a while now. See also IDS, gove and Hunt for crimes against numeracy. unfortunately most of the public are unable or unwilling to get to grips with something as 'complex'. shame

However. I don't like to *bang on about* gay marriage, but it isn't just the 1% who think that gay marriage is a good liberal embracing the modern world policy. You don't have to be gay to support gay marriage.

Cameron himself is guilty of lying through stats. The public deficit is down a little bit, but the stats are used selectively to state that it has been reduced by "a third". Even on the most flattering stats, 29% is not a third. And then he goes and equates reducing the deficit by a tiny bit to "paying down the debt".

They're all at it. It's dangerous because they simultaneously undermine their whole "profession" and also get people to distil their views based on totally false premises.

Cameron is terrible with stats; after all he copies Blair who was also awful.

Statistics are just made up to help ones position, as BQ rightly says, nobody checks or cares.

The biggest this week is surely the annoucnement that there has not been any significant global warming that can be blamed on man for..er..200 years.

Lucikly I know that 11 out of 10 of my readers are smart enough to see through all this FUD!

assurance auto said...
This comment has been removed by a blog administrator.
10:27 am

Topographie Beni Mellal said...
This comment has been removed by a blog administrator.
10:32 am

cours PDF said...
This comment has been removed by a blog administrator.
10:38 am

The spammers are getting up earlier I see ... the new breed of human is almost (but not quite) endearing.

"This article is concerned with some important terms as decision and statstics.I reaally enjoy reading it."

Cameron and Blair are trendy arty liberals so probably have no science or maths in their background. If they did they might not throw their dubious figures about with such gay abandon. But hey they're politicians aren't they?

Your thinking on rape is a little flawed I think as perhaps some of the rapists rape more than one woman in which case that lets some of your figure of 20/10 million rapists off the hook! In fact there are probably not that many men resposible for the majority of the rapes (but I won't attempt to put any figures on it).

I'm sure most of the statistics bandied about are manipulated to some degree. As someone once said "there are lies, damned lies and statistics."

Jan, I think about 73% of convicted cynics have quoted that!

@Jan - arty liberals are innumerate, so those with a science or maths background are simply liars?

In ancient times they had no statistics so they had to fall back on lies. - Stephen Leacock

As someone famous once said, "I have never met a pollster".

Thankyou all. Most entertaining replies.