Even Question Time is not safe 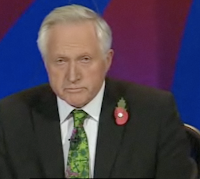 That is right, a new front has opened up in the war on the BBC, this time from the Left. No other institution than the Queen of Primrose Hill, in the form of the Guardian, has attacked the sacred institution for being too, er, populist.

In a successful effort to prove that you can't ever satisfy a lefty, the article goes on to say how sad it is that there are some comedians (all lefties...they seem to ignore this bit!) that are invited on and not enough, um, scientists.

I mean what is the BBC thinking trying to make accessible, popular, political programming. What sort of world does it live in that it thinks QT ratings should not sink the the levels of the self-reverential Newsnight, chock full of Marxisms and anti-everything spin merchants?

The BBC can't win, yet the Lefties don't seem to think the problem could be resolved by Privatisation, somehow a state institution can be harangued but not really altered.

It's a funny old world.
Posted by CityUnslicker

I agree. It's a bit like physics graduates moaning that Brian Cox doesn't put enough hardcore maths on the screen.

If popularity were the BBC's issue then QT could do with being on a lot earlier.

I want to know why Russell Brand is deemed to be the national expert on how to deal with drugs - there are millions (like me) who managed to get through life without taking them. Shouldn't they be asking us how we did it instead ?

how do they count politicians who are also comedians?

we all remember Mr Quango's fabled appearances on QT ...

It's not about informing. It's about grandstanding.

As demonstrated when Mr Brand told the audience that the rich, fat cat, big salaried bosses were sucking all the money from the companies, leaving the workers without enough.

Choice words fom the only millionaire, Six figure contract signing , Multi home owning member on the panel.
( if you don't count £100,000 an episode Dimbleby himself)

George Galloway can rage against dictators in Whitehall. Excusing his own favoured dictators as obeying the will of the people who elected or sponsored them.

Both received the applause of the audience for their principled stand.

With that level of insight I don't think the likes of Stephen Hawkins are going to add much.

If you want elitism

If you want popularism, there is Jeremy Kyle.

- probably find out that GO and EB share a common ancestry and are having a relationship with the same person and she is preggers and also shares the same common ancestry.

Back to the middle ground -
That is far more fun than both of them saying that they would do _exactly_ the same thing within rounding errors, but EB would look more sorrowful about the cuts.

and on the the elitist -
What I would really like is some sort of proper response to the point that the Today program made about the OBR - basically the OBR says that the deficit is not going away mostly because the national growth rate has been reduced on a long term basis.
So, what do you do
(a) borrow money and build motorways etc in the hope that it makes things better now and provides value long term (Lab)
(b) not borrow money and hope the money not borrowed is used well in the private sector (Con)

STarting looking at the Graun ting but found it excreable, but then I would expect nothing more from a self proclaimede media 'scientist'.

..so will be in favour of big government, big spend oh and their own pet theory ... which requires more and more of our money.

In the mean time if any challenge come up they will keep repeating the word 'science' like a magic mantra they think will answer any criticisms.

very interesting. this topic is more attractive. it can make any one of us know more and more about the the its necessary.... ""In a successful effort to prove that you can't ever satisfy a lefty, the article goes on to say how sad it is that there are some comedians (all lefties...they seem to ignore this bit!) that are invited on and not enough, um, scientists.""

when i read this topic i was so proud to give my consideration to the important of this topic ... so this lines attract me so much and much.."" The BBC can't win, yet the Lefties don't seem to think the problem could be resolved by Privatisation, somehow a state institution can be harangued but not really altered.
""

this is one of the great and very interesting articles that i read .......... i find it useful and perfect because it can solve so many issues that happen to us...... when i read it i get the message and i know the key way that will provide me with good solution ..... so thanks so much for this article is very great ...... and very interesting ..... to share it with us is like a honor from you ........thanks a lot ...

right really this article is very good and very interesting ..... so this post is very nice and amazing ...... as all the time we can find interesting ideas on this great word ..... so as a way that can make us to follow any website is the important of the topics that represent to the readers and the visitors........ so thanks so much for sharing it with us.....""