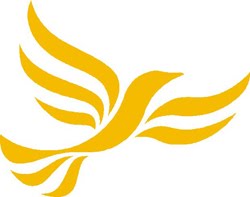 David Dimbleby presents Question Time from Rochdale. On the panel:
Conservative Cabinet Minister Ken 'I have no job yet I must be paid' Clarke MP;
Deputy Leader of the Labour Party, Harriet 'I won an all male selection' Harman MP;
Liberal Democrat peer Shirley 'I object to the House of lords..oh..wait a mo.. Williams;
Laurie'I'm such a bad advert for youth' Penny, contributing editor of the New Statesman
and chef and restaurateur Antony 'On the 3rd marriage and some'  Worrall Thompson

Twitter- its often better than the actual show. better than lobbing bricks at the flat screen anyway.

BQ believes:
Dimbytie - Purple and gold.
1. Free food for kids Yayyyy! - The subsidy for this is roughly 3 times the royal mail subsidy that apparently cannot be afforded, but what the hey! Its a middle class cash back!
2. Bag tax. As Neil on the Young Ones once said ..I don't want to be heavy..but.. 5p is 5p
3. UKIPpery. Foreigners must have health insurance. but how will that work?
4. Drunk tanks..privatisation of the police says Hattie, who secretly wishes she had thought of it.
5. Veils and the law- As a committed naturalist is it my human right to appear naked in court?

1. should women be allowed to abort for gender-of-child ?
2. have LibDums really broken the 2-party system ?
3. should Qatar World Cup be held in winter ?
4. should Spurs fans be allowed to shout the Y-word ?
5. are drunktanks the answer ?

- The covering of faces. 3 stories about it this week.

- Subsidised food for all kids. Why not just take them to a foodbank? It will be free then.

- Drunk tanks and billing the bingers for time spent vomiting in a sealed unit.

- Failing hospitals being sorted out by hospital super managers..well, it is QT. Obligatory NHS question.

Just seen lilith's comment on the Scotland question.
Polling suggests that if the average Scot was £500 better off they'd quit the union.
"Can't we just give them the £500 ?"

Somehow reminded me of the Liverpool fan joke.

The man says "But why? I've always been good. I never cheated on my wife or got drunk or committed mortal sins. I loved my children and attended church every single Sunday...I've always lived a good Christian life."

The man looks desolate. He pleads with St Peter..
"But..but..I had three adopted children that I took in from the orphanage..I worked in public service all my life doing good work and helping those most in need. I treated everyone with respect and kindness.
...I was always in involved with charity..why just last week I raised £250 for Christian Aid by sitting a freezing water bath.."
And tears well in his eyes..

After 10 minutes St Peter comes back and hands the man a golden envelope and says...'God spoke and he commanded thus..'

Tie: pale purple and yellow diagonal stripes overlaid with a Moire interference check pattern that makes it look as it it keeps changing colour.

I guess it'll be Lib Dem fest, as follows:

2. How long will the coalition last.

And a couple of usuals

4. Muslim women wearing burkhas and kneecaps, should it be allowed, oppression of women, freedom of religion.

Stupidest statement made by member of audience: "Westerners are allowed to cavort as they like in Islamic countries, drink booze, have extra-marital affairs or be gay without fear of reprisals. Shouldn't we return the favour to Muslims in our commuity?"

5.. Should we invade Syria with boots on the ground or just nuke Damascus and wipe the whole sorry place off the map?

1. Why should Muslim doctors be told not wear a veil. Especially when it appears none of them do anyway.

3.Free school meals. have the Lib Dems restored their fortunes?

5.Rotherham grooming by gangs and the suicide of the carpenter..

1. Should UKIP form the next coalition with LibDems since both are on the up?

2. Syria. Is one year enough to get rid of the weapons. Will the rest of the Middle East follow suit?

3. Free schools meals. Is this a Human Right?

4. National Service. Could we mobilise them to check the borders like Dad 's Army did?

5. Scotland - do we really need it. Can we get shot this year?

I thought UKIP's idea of tying a Visa to insurance was a good idea. Is there any hope for me? (Not one of the questions I expect the panel to be asked)

evening all neck tie spotters! My guess is black with green things.

Some other things are more obvious I hope..

1) Burkas etc, eye-slits courts and nurses. What to do?

2) Free school meals for minors.. Will they get Jamie in to help out with the menu?

5) Child neglect/abuse: When is someone in social services going to stand up to be counted?

I fell asleep last week (Again) will try harder to twit the most useless comment here.

1. As the Syrian said to the journalist "2000 years ago we gave you St Paul. Now you send terrorists to kill us". Is this cool?

2. Where are all the Lib Dem women? Living with CAGW sceptics, Mr Davey, having checked out the degenerates of your party?

3. Is it ok to be spooked by a nicab wearer or is it racist?

4. Can we afford to give all the children food? Will it be edible?

Not sure that joke travels too well Bill!

1) School meals - oh, ffs, here we are at the bottom of the fucking barrel.

3) Living wage - inflation shite. Whilst Laurie Pennie is full of shite - she's educated and can talk bollox and this is meant to be entertainement, let her go - she's a kid.

1) The HS2 "re-spin" vs. the report on the years of scheduling chaos it will cause - a dead-project-walking or still the best idea we can come up with for spending £50+ bn on?

2) are veils/burkkas/niquabs a sign of individual choice or oppression?

3) Are the LibDems like herpes - here forever? or will they be wiped out at the next election?

4) Clegg says free food for kids - remembering his tuition fees pledge, does this mean the cost is about to treble?

5) Party Conferences - Why is so much media time/space given to them?

Darn it. Without having actually seen the show so far, given the panel I confidently predict most watchers have been driving a rusty spoon[1] into their eyes. Of course, they should have gone for the ears.

Questions - The first question - Would you be happy to be treated in hospital by someone wearing a full face veil?

Q2: Should the children of wealthy parents get 'free school meals'?

Q4: Given the likelihood of 2015 Election being a hung parliament, should Nick divorce David and remarry with Ed next time?

Didn't see the show, except last 5 mins with LP chewing up old Shirley.
so Qs came from the twitter.


MT: @AntonyWT On #bbcqt tonight, little nervous but hey in for a penny in for a pound, give it my best shot, try to balance out the lefties

If you would like to know how to make a dog's breakfast, you will need Harriet Harman, Laurie Penny, and Antony Worral-Thompson #bbcqt

All the Left-wingers on this panel went to private school. Britain's an odd country. #bbcqt

Nick Clegg's stood up for what he believes in. Except opposing tuition fees. Which is what he ran on. #bbcqt

gsd -good stuff - 5 {best comment on HS2 - for £60bn we could knock down and rebuild Birmingham 40 miles closer to London.}

Winner was MW, who tops the leader board with one win!

seem to have missed this, I would have got zero. Surely that collectiono f lefties just talked about Thatcher for 2 hours and nout else?

Late to the party, BQ.

Well, best to give others a head start and for the sake of my sanity, thank goodness I missed the headmistress.