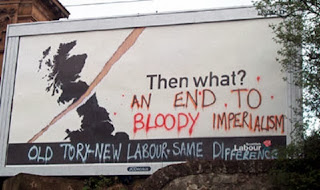 This week is the equivalent of the international fixture period in the premier league.
That means politics is being played, but no scores apply in this tournament.

Scotland is usually one of the better QT venues. However C@W won't be asking you to phrase 'YES OR NO' in 5 alternative ways.

So the only way to win tonight is to guess the Dimbletie: 1 win awarded for closest to the colour of
the long piece of cloth that is worn around the neck and under a collar and that is tied in front with a knot at the top.

(defo one to miss, cheers Bill for the mercy).

The actual official SNP colour is sort of goldy-yellow, so I'll go for godly-yellow with a thistle in the middle.

Mostly blue, with a little red in it.

So Black and light blue, possibly a bit of white...

Closest is Timbo and Taff

So - penalty shoot out.
Fingers on buzzers, first to answer -

"Why did Mr Dimbleby choose a Scorpion for his tattoo?"

I am truly inspired by this online journal! Extremely clear clarification of issues is given and it is open to every living soul. I have perused your post, truly you have given this extraordinary informative data about it.
banditcustomauto |

Very interesting post. really informative. of all the blogs I have read the same topic, this one is actually enlightening.
bestofgaytravel.com |

It was wondering if I could use this write-up on my other website, I will link it back to your website though.Great Thanks.
www.palestinarossa.org |