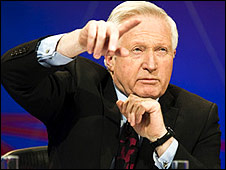 David Dimbleby presents the topical {?} debate from Salford, with an audience who are all either under 30 or over 60 years old, for no particular reason other than they do like trying to make the show different without actually making it any different.

With health secretary Jeremy Hunt MP, shadow justice secretary Sadiq Khan MP, And ??? They don't know or have just forgotten to tell us.
Will post guess later - Christmas Window is today. Get shopping you lot. Its been quite laggy.

1. is the 'economic recovery' just a tory-bubble ?
2. the Co-op bank - WTF ?
3. should the Pythons be re-uniting - or is the magic never really the same again ?
4. should there be an amnesty for everyone and everything in NI ?

(everyone hurls themselves on Hunt and beat him)

1. Should the age of consent be lower?
2. CO-OP bankers. What a carry on.Should the PM admit he took cocaine?
3. Amnesty for Ireland. Plan abandoned already but too quick?
4. Record number of Spads. Mostly be the say no to spads lib dems.
5. Monty Python- Have the under 30s ever heard of them? Were they funnier than Miranda?

On behalf of @measured once again, who is stuck in the wilds away from working Internets….

1. A good one to get going, voluntary or non voluntary euthanasia ...or just let the NHS do its worst?

2. Pay taxes to save the planet or to create jobs to let people buy property?

3. We leave the young to pay back the deficit....austerity now or later. Same as above really.

4. Why do we shut the stable doors after the bankers have bolted? *snort*

5. Lowering the age to vote or to (NOT) make babies.

What a week. Just as we thought we were on the brink of a recovery, another banking crisis.

1. Should we now refer to God, Mammon and Crack?

2. Is George conducting a witch-hunt to divert the media from his incompetence.

3. Is George the best chancellor we have ever had?

4. Brits in Syria. Should they be prosecuted on their return? How many years should Hague get?

5. NHS? Can it ever be saved from the onslaught of hypochondriacal disorders that besets the media types in Salford?

2. Typhoon in far away country, tornadoes in far north of USA, hurricane over Sardinia, global warmening, end of the world as we know it but I feel fine.

3. Northern Ireland amnesty - who will benefit from this most, murdering IRA scum, murdering UDA scum or mudering British Army/RUC scum?

4. Monty Python reunon, Doctor Who fifty years old, is this country stuck in the past?

5. Bound to be some anti-Jeremy Hunt question like "Why don't more nurses look like Barbara Windsor in Carry on Nursing?"

1. NHS Winter crisis. What's to be done?
2. Co-op bank. Who was the more destructive banker: the Rev Paul Flowers or (Sir) Fred Goodwin?
3. Where was the team when the first Dr. Who was broadcast?
4. Is there really an economic recovery or is it just a housing bubble?
5. Were the Pythons ever really funny?

1. NHS A&E Cash for doctors, waiting lists etc
2. Reservists and the mini revolt. But is it right to ask our part time soldiers to go to war?
3.Banker/priest takes cocaine shock -Do any bankers NOT take cocaine?
4. Slavery issue - how could this happen
5 - Can't see BBC or Dimbleby missing a JFK opportunity - Do the panel believe the official Warren Commission report?

3) I love the Reverend Flowers - if that boy can sing....Some handcranking of banking oversight just for kicks.

4) Raising of tax allowance - is that a policy now?

Evil Tories are closing the NHS

A nice balanced show from true blue Salford. Co-OP HQ is a couple of miles dfown the road so you can be sure the audience will be chock foull of co-operatives.

1. Should the government 'get rid of all this green crap?'

2. How much more taxpayers money should the government pay GPs to do the work that was expected as standard before 2004?

3. Is the fix in for a Miliband, E. administration? Why do the scandals with which he is associated only get cursory coverage?

4. Is there anyone who thought that the police were NOT massaging the crime stats?

5. Could a mediocre marksman using a bolt-action rifle with a defective sight hit a moving target 150 feet away two times out of three, inflicting five seperate wounds on two people, including a head shot, and make his get away, only to be picked up a couple of hours later for shooting a Dallas police man? ... Just as a wild hypothetical.

You'll need to add that last one to the next post. ...

Hello all, a tired Timbo guesses:

1) Banker blame row, who is to blame or is it just another example of not what you know but who you know?

2) Northern Ireland amnesty seguing into Irish civilian (terrorist?) killings, again who is to blame? Those who gave the orders or those who carried them out or were they interpreted too loosely?

3) NHS - take your pick of subject his week!

4) Cyclists v lorries didn't come up last week but with another death this week...?

Only 4, nobody will expect the Spanish inquisition..

Too late for tie really, but I haven't seen it so going for black again with a pattern maybe yellow..

oops, should have looked at a trailer!

Who would ever have guessed these would be the type of people from salford. the Beeb has filled the studio with its local staff....

#bbcqt
First question - something about universal benefits being taken from oldies to youngies.
Sadiq Khan nailed the damp rag Grender when she said its wrong that Alan Sugar and Richard Branson have bus passes.
" They might have them but they don't use them- the cost is zero."
I think Alan Sugar has a Bentley.

Khan blows it on next Q: If clever banks and bankers in London cheat us, and ethical banks mess up, who can a Manchester girl trust? which is about CO-OP.
Basing a judgement of the Co-Op on one person is “very, very unfair”


Except its an ETHICAL bank, which he was the chairmen and he knew nothing about banking. like Osborne ?

Q3: What can the government do about the housing market – when average wages have decreased, while house prices continue to rise?

Q4: Will the reforms to the NHS do enough to prevent serious failings in care, such as those at Stafford Hospital

Well.. until I watched this Salford show I had no idea there was an affordable, simplistic, easy solution to all the nation's problems. Its just government not acting that is the problem.
Olly Grender might be duller than Rachel Reeves. Its on iplayer - you decide.

Winner is ND who decides if Wonga are to be given the Co-Op banking licene.

yes, wonga it is - they are well-known to many a Manchester Co-op member

and to fill the vacancy for chairman of this ethical bank ? why, Stuart Hall who is, I believe, a Mancunian with adequate banking knowledge and can surely fulfill his ethical duties to the bank on day-release

I am currently trying to sell a very large business to Wonga - you lot won't believe if it happnes!