For Once, Regulation Is Actually Warranted 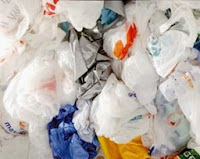 We suffer under grotesque amounts of interventionist EC regulation, generally misconceived, frequently futile if not actually counter-productive: so one's knee-jerk reaction is negative.  (Always a painful manoeuvre, and called upon all too often.)

But, say I, mandatory charging for supermarket plastic bags in England and other countries is long overdue.  The pricing mechanism to resolve a nonsensical situation, in its simplest, most effective form.  (It even taps into the tax-dodging reflex and people become determined to reject a proffered bag.)

Most of this detritus can be attributed to a narrow demographic.

Plastic bags in our house are used to put rubbish in. I expect Morrisons are savvy enough to have incorporated their cost into my shopping already.

I give all my carrier bags back to the supermarket. The supermarket encourages this. I don't see the problem.

Tackle littering if you want a cleaner public space. Can we also tackle spitting in the street and cycling through red lights while we are at it?

Problem is, supermarket is one place you need the bags.

I refer the readers to Red Dwarf X and the Jesus episode.

I should add that BQ Industries buys in only about a third of the plastic bags we used to.
I would guess almost half of customers don't take one. The big change was asking people if they want a bag.

Years back the idea was to flood the street with you logo. Give out as many bags as possible. But environmentalism made people decide against being overloaded with bags they didn't need.
And on small items we use paper bags. Which lonely about 1 in 10 ever choose to take.

A basic placcy bag from your corner shop convenience store costs about a quarter of a penny.and is a deductible expense.

And the bag thickness all decreased . A 2000 carrier bag will be twice as thick as today's and contain recycled plastic.

CU was in the green plastic bag business in its infancy. What do you think CU?

( I am in a Sainsburys cafe now.. There are no plastic bags blowing around the car park. .. There never is. Nor any floating around the McD next door. Litter patrols take care of rubbish.)

Can't see any in trees either. I think the problem the tax is aiming to solve has been solved already. It's been being tackled for at least 20 years already.

Someone posted the big problem is farmers using heir plastic agricultural thick sheeting. That's what used to hang in the trees and hedges.

The problem with plastic bags is that they last a very long time indeed.

The same is true for granite.

I write carefully & at length about some blockbuster issue, end-of-the-world or something like that, and wait 12 hours for 2 comments (one of them spam)

OK chaps I get the message ...

ND, the most popular post on my blog was a retrospective on the colour of milk bottle tops!

Serious question, as despite the evidence we are likely to have a bag tax because both Clegg and Clegg want it. If you take a bag back do you get your 5p back?

I am in favour of a tax too! How about that. becuase as BQ mentioned I know what total scum plastics manufacturers are. They drop a bit of plastic on the floor, pick it up, throw it back in the mixer and hey presto - recycled bags.

It's a total con. Paper bags are an older and, er, better solution - they are much hardier than the new plastic bags anyway.

Plus plastic bags take 1000 years to degrade in landfill. the contents of the bags, 10-20 years for most non plastic or metal items.

That stat about the time taken for a bag to degrade is about 1000 years out of date or possibly was never true. Ever put a plastic bag in a drawer for a few weeks/months? They turn to dust pretty quickly. The supermarkets have been working on degradeable bags for ages.

Right On! And subsidise things we do like, BE!

Hobnobs! Who doesn't like them? Make them 20p a pack.

BE - I was the one making the degradebale bags. Nowt wrong with the stat. Anywya, your rant does not wash - should we reduce petrol and alcoholo taxes to zer so as not to be seen as wanting to ban cars or alcohol?

Especially as there are alternative to plastic bags that would be untaxed.

Yes. I think you have to work out where the state's responsibilities stop and personal responsibility kicks in. You are sounding very much like a social engineer planned economy kinda guy. Interestingly you gents argued against state planning to get the right kind of electricity produced.

So because we already tax things too much we should tax another? That's an odd thing for "capitalists" to be suggesting. When even a free-market blog is calling for absurd interventionist micromanagement I know it's time to pack my bags.

In France, not a country I often have anything good to say about, but plastic bags have been banned for quite some time now. So supermarkets sell reusable bags 10 cents each (which do last a long time even with constant use) even to carry frozen goods home in. I found that it works very well. Initially forgetting to bring them with you does mean ending up with more than you need but eventually it becomes a habit to do so.

My most popular post ever was about my cat.

The sky is full of plastic bags, so are the trees. Look up at any time of day - you'll see them everywhere (not.)

The fact is, if you go scuba diving or snorkeling, there is all sorts of litter on the sea bed everywhere. It's just that the plastic bags get noticed because they float.

I gather that most of it comes from beaches, tipping and from ships. General littering.

Again. Here we have a minority problem which is about to be dealt with by a burden on everyone.

Got yourself fat ? Tax everyone on sugar.

You're a pervert ? Make everyone prove their innocence by means of CRB.

You belong to a distinctive group with a predilection for bombing airlines ? Subject everyone to airport security.

The solution to plastic bags is far easier and farer than taxing everyone.

Bravo Nick. You're still a Tory at heart - totally well intentioned but willing to bend the rules @ NIMBY level (oooh - that's a bit rude!). My lads are out campaigning for 20mph zones all over the borough yet whinging about transport links!!

Good lad - last time I nearly got my head caved in was @ Leeds Station and reflexively shouted at a black lad in a group of young lads 'pick it up' as he dropped his burger litter (really aggressive and I was only about 10ft away from him!) and they all turned round and the lad picked it up. Do that in Croydon and it's curtains - really surprised at myself and how furious I was.

I'm all for cleaning up litter, i'd get rid of social workers but when all government does is bury waste then that's just sweeping it under the rug. Taxes have to be specific and because of road tax and council tax and chavs that Local Government has to cope with waste and we get taxed for it. Plus, there was a strike on @ Probation today and community service does seem like a good litter picking waste of time. If 5p pre carrier bag funds probation getting these lads to sort out shit zones then cool as fuck.

Ryan @ 10.26; "The problem with plastic bags is that they last a very long time indeed."
I am grateful if they last as far as the car park !

"Again. Here we have a minority problem which is about to be dealt with by a burden on everyone.

Got yourself fat ? Tax everyone on sugar.

You're a pervert ? Make everyone prove their innocence by means of CRB.

You belong to a distinctive group with a predilection for bombing airlines ? Subject everyone to airport security. "

@BE - Litter man, litter. Only recently i've stopped picking it up - will start again. Most things I can unserstand but pissing on someone's doorstep and it always is a direct sleight to someone kinda seems actionable.

My No 1 post of all time was about why the NHS shouldn't fund most cosmetic surgery - entitled "Women with big breasts and tattoos". There are thousands of disappointed googlers out there ...

If bags are taxed, what will the packers of home-delivery orders do? A 'top up' delivery from Tesco with 30 items typically arrives in 20 carrier bags.