Vinc Cable refers RBS - the first of many? 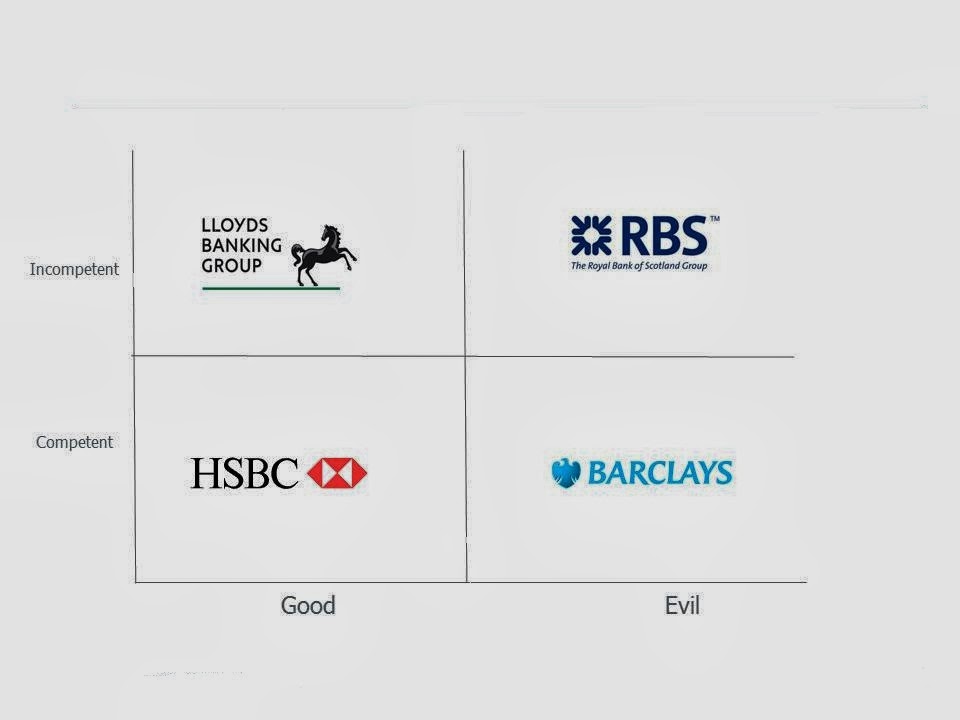 Well, RBS's scandals seemingly never end. Many of its traders are caught up in the ongoing LIBOR scandal, there is the FX scandal to come and the FT has reported RBS traders may be endangered. And now over the weekend Vince Cable has referred another report to the FCA which alleges that the RBS GRG unit (its restructuring business) has purposely put small firms out of business in order to make money by obtaining their assets on the cheap.

Now this seems a little far-fetched to me in the round. A bank lends money to a customer who can no longer pay, the bank claims assets, probably to a lesser value than the loan, but at least gets some money in. Yes, this is a remedy and potentially if you managed to time property acquisitions of this nature to the bottom of the market there is an upside- but as an overall strategy it is ludicrous. You have to make bad loans in the first place to make it work - any bank that did this would go bust....ah, hmm, I see the problem now.

Still, who can trust RBS - I attach a small diagram, hand drawn, which is a useful guide from a few years ago of how the defunct FSA may have viewed the various major UK retail banks. A one could guess from this, RBS will always be the first one up before beak on account that it is more exposed than the other institutions culturally (though that has changed) and systems wise in terms of exposing any mistakes or wrong-doing.

Isn't the issue that the bank's charges were so high that the firm couldn't pay the charges and the loans and ultimately, when the bank reckoned it could get most of its money back, and some assets, it pulled the plug?

So speaks someone who has had experience of paying what amounts to a 33% interest to the banks.

I don't see how this is a money making venture for the banks really.

I do take issue with your diagram, at least the description of Barclays as "competent" massively overstates the case in my experience.

This suggests the appalling prospect that RBS and Lloyds are or were even more clueless. I'm terrified.

The diagram is neat, CU - but as the kings of money-laundering don't HSBC qualify for 'evil' ?

(in Homeland the evil ask-no-questions, terrorist-facilitating, money-laundering bank is 'HLBC')

Umm...read carefully what I wrote, as to who takes this view.

BQ - Look, Banks are shitty. We knwo this. If you have to borrow money, they take it with blood. But this is what they do - after all, Wonga are worse and that is the only alternative. Why the lack of capital to SME's is the bigger question, but sadly the answer to that is they are such terrible business for banks.

Generally assets are marked to model. If you sell them then the price becomes fixed to the real market price. Since we are in a recession, the model price of the assets is usually >> the real price.

So it would surely be a mistake for RBS to liquidise paper assets in a weak market?

After reading the few case studies in the Sunday Times yesterday (I think they quoted 44) it did seem as though it was a ratchet job - one had their loans pulled 6 days before opening (but, ofcourse, more facts are needed). However, whilst as a strategy it sucks, tactically it's pretty profitable.

You would think that such cases were investigated or were able to be investigated as a matter of routine and Vince Cable wouldn't have to get involved.

Just when did the big banks move big time into asset stripping associated with money laundering and gaming the markets? And who was supposed to be in charge at the time?

Where would the Co-op, the "Crystalmethodist" Bank, figure in your diagram? Would it need a third dimension, labelled "ethical"?

I have some personal knowledge of the BoS restructuring unit - a neighbouring farmer fell foul of them. The issue is not that the bank itself was going to make money, its that there were corrupt managers who were making money out of it themselves, by buying the assets they were putting into restructuring themselves (or giving sweetheart deals to mates for backhanders).

Oh, and its quite possible for the bank to make money out of calling in the loans, particularly if the assets are worth more than the loans (bear in mind this was going on in the boom years before the crash). Lets say you lend £500K to someone for assets worth £500K, but over time those assets have risen in value to £600K. You call the loan in at a point when they would struggle to get refinancing), sell the assets at a below market £550K to a mate, get your loan back, and charge the 'customer' £50K in restructuring fees. The bank has its money back, the restructuring section has a nice profit, and the manager who organised it all gets £20K in used notes from his mate for letting him buy some cheap assets on the sly, the cash for which deal he's probably been lent by another arm of the same bank.......

Jim - look corruption is one thing, but if true there are surprisingly few of these cases ever coming to court. I totally get people who lose everything being bitter about it; I would be too.

BUT, no banks planned for the property crash bar Goldman Sachs. for every scenario you paint, there are 10 where the bank has lent £15+ million on what turns out to be agricultural land or worse:

are we saying that banks are worse shysters than administrators/receivers/liquidators? If so, they must be really corrupt people, the sort who would make the late Ian Mikardo seem like honest John

Who has the evidence and can dob the managers in? The Banks of course. The police aren't going to launch a million pound investigation on the say so of a few failed business men, who claim to have been the victims of corrupt practices. And why would the Banks want to dob their own (possibly now ex) employees in, if doing so would open them up to massive compensation claims? They are going to clam up tighter than a ducks @rse, and admit nothing.

And that's where they're heading.

once an institution reaches a certain size it is inevitable that some components are given central targets and they meet those targets in a legal, but immoral manner.

Andrew, that was my take on the story in the Sunday Times. This stuff almost certainly isn't a bank policy (who would have the stones to write a minute up about this?!) but I can well imagine there are people within the bank who might see an opportunity at the margin. It would be difficult to write a rule that stopped anything which in retrospect looks a little sharp.

The chap in the Sunday Times article was near to completing his development project but had to borrow yet more to finish it off. That strikes me as a situation where a hawk might say "throwing good money after bad" and a dove might say "oh go on let him finish the project off and then he'll have enough to pay us back". What we don't know as mere newspaper readers is how many times he'd failed to finish the project/failed to repay a loan/walked away from one project to finish another/etc..

Overall, a great many people have done very well from the banks NOT calling in bad debts during this downturn.

BE - Super comment. I have not doutb banks were sharp and bankers are arseholes in the main. the derivatives mis-selling was a key issue and that is being delat with.

the reality is most of the people moaning had borrowed 80%+ to do their projects. doing this in 2006/7 was financial suicide. I applaud risk takers et al, but capitalism is a harsh mistress.

I may be out of line here but I think this is the correct course of action for RBS. This is the type of buccaneering and entrepreneurial spirit the main bank of a new independent Scotland will need.

And if we can asset-strip England then all the better.

Hello,i want to sharing just to the point. RBS- Rich Bastard Scum. What's sad (and friggin annoying) is the major banks are making record profits now and paying out record bonuses!!! Those involved in the financial crisis got away with daylight robbery. The only lesson learnt from the crash is that no matter what the banks do in the future, government will always bail them out as 'they're too big to fail.Thanks you so much>>
```````````````>>>>>>>>>>>
Secured loans

This is an excellent post I seen thanks to share it. It is really what I wanted to see hope in future you will continue for sharing such a excellent post.
www.gottocollegevt.org |

Positive site, where did u come up with the information on this posting? I'm pleased I discovered it though, ill be checking back soon to find out what additional posts you include.
http://www.mybusinessprofit.com |

Not so bad and it was good. Though sometimes criminals are caught and punished.
www.ageinvestment.com |