Putin's hand is weaker than you think

The first cold war was won by the West without the need for a full on confrontation of opposing armies. Yes, sadly millions were killed in proxy sponsored wars - but the Cuban Missile Crisis apart there was little chance of actual engagement.

In the US and UK media today there is a feeling that Putin and Russia have all the cards and the West will stand around meekly with nothing to do but shout and huff. Journalists are keen to dust down 1938 accounts of appeasement of Hitler and so forth.

Of course there is no hope of the West militarily intervening in Ukraine but what we do have, as in the first cold war, is the power of business.

Russia's budget requires a high oil price, worse it is reliant on one or two state giants to provide it with funds. The US does not need Russian Gas or Oil and neither does the UK - even Germany has reduced its reliance in recent years.

Worse for Russia, look at the rouble - the currencies fall at the end of last week handily mirrors the economic prospects for Russia. Crimea as a nationalist use and its use as the base of the Black Sea Fleet and home to holiday Dacha's. Beyond that it is of little economic use. 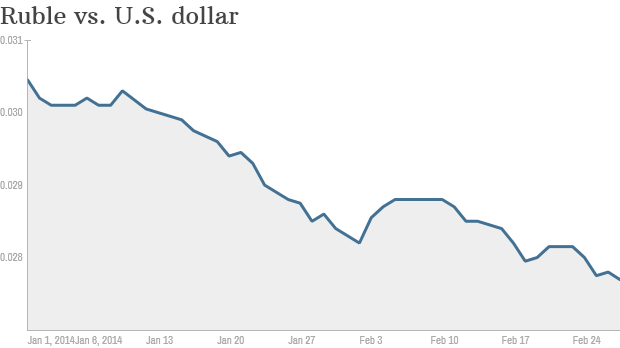 The idea that threats about G8 status are effete and weak are wide of the mark. Russia's corrupt and disjointed economy could ill-afford to be cut off from world markets. Putin will not be popular with his fellow oligarchs if their businesses face severe sanctions. Russia is no economic superpower and cannot win a victory except by militarily bullying the weak neighbours on its borders.
Posted by CityUnslicker

I agree. In the medium to long term the Crimeans can return to Russia but they risk looking on at the rump of Ukraine as plays catch-up with living standards to rejoin the prosperity of Poland, Slovakia and other border countries.

Still, is the EU ready to welcome Ukraine or will existing members pull up the drawbridge?

There are other easy tricks up the West's sleeve: freezing individual oligarch assets for starters, Putin must have a mind-boggling stash somewhere and it ain't China

however in purely practical terms he can do whatever he pleases in E.Ukraine, and he has every reason for occupying it, directly or by proxy:

(b) he has to defend his own position, which is best done beyond his own borders than within

old military saying: if you want to defend a river-line, you must hold both banks

An erudite commenter elsewhere mentions that Russia's serviceable fleet should by now be at sea - away from threats from land and facing those threats from the sea.

'Serviceable' being the operative. How many of those ships are seaworthy ?

Kev - in 'normal' circs, a sound principle: but in this case

[*if some rogue Ukrainian commander or politico tried his hand at (say) an artillery barrage or solo airstrike in the direction of Russian assets (which wouldn't be very difficult), the response would be so crushing as to be rather awkward all round - in practical terms the Russians have an absolutely clear hand

the West would step up its economic sanctions, no doubt, but Putin would be happy to have made a rather clear point

Russians like the Smack of Firm Government very much indeed]

"the Cuban Missile Crisis apart ..,": which, alas, was principally the fault of the USA.

A full-scale invasion of Ukraine would mean a large war with heavy casualties on both sides. To control the whole country the Russians would have to massacre thousands of civilian protestors and maintain a hugely costly military occupation for many years to come. Putin must understand that the economic, political and military costs would far outweigh any possible benefit.

The only important strategic interests that Russia has in Ukraine are preventing the emergence of a hostile power on its border and keeping control of the naval base at Sevastopol that provides the Russian navy with access to the Black Sea. The first can be done with a show of force to remind the new government what Russia is capable of. The second can also be achieved with a show of force or by annexing the Crimean peninsula. Putin probably assumes that the Ukrainians wouldn't be wiling to start a potentially catastrophic war over Crimea.

Andrew Z - yes those are the likely outcomes. However, the meedia today is full fo those who seem to equate the military power of Russia with the old Warsaw pact.

Whilst of course there is no challenge in the Ukraine in army stakes, there is a lot in the economics. Russia and China have common enemies, they are not friends and 90% of Russian people live closer to London than China.

ND's point about the oligarch's is well made - just as it was Ukrainian Oligarchs who agreed to get rid of Yanukovich in the first place.

@Andrew: The only important strategic interests that Russia has in Ukraine are preventing the emergence of a hostile power on its border and keeping control of the naval base

Be careful of that 'both banks' maxim.

The battle of Fishing Creek involving the fabulously named General Zollicoffer saw him on the wrong side of his own defences.

The Russian fleet is a mid 80's navy. A warship is good for about 20 years? And can do serviceable work for another 5-10 if it has been very well serviced and maintained.

The Russian fleets haven't been.

They are better off in port as a Saddam style threat.

@BQ - Zollicoffer must stem from the Russian Zelikova, which is pronounced pretty much 'Zollicoffer'

(when I was in Moscow the CFO of Gazprom was the rather dour Mme Irena Zelikova: when I had the temerity to suggest to her that oil-indexed gas prices gave them a rather volatile revenue stream, she replied: "een Gazprom, vwee take a feefty yurr view" - which was a rather good answer)

Always! its our sub-forum!

Something that hasn't been mentioned much is that Putin pulled the same trick in Georgia: give Federal passports to ethnic Russians, provoke Georgia for a year, and then claim to be defending Russians when Georgia finally snapped. Even Western media at the time was on the side of the Russians and painted the Georgian president as a Bush lackey.

Times are different now. Ukraine failed to take the bait and the Western media is on its side.

But on a lesser scale Putin has even done similar things in the Baltic states (remember that cyber war over the statues?). Hence why Latvia and Lithuania were the first to call Nato Article 4.

So the worry is that the West gave him Abkhazia and South Ossetia and are now going to give him Crimea. Are EU and Nato membership really enough to stop him from advancing further? And is it even worth starting WWIII over somewhere like Estonia anyway?

DJK - Thank goodness its armchair generals and not armchair admirals ... otherwise most of us would be sitting on the floor because there wouldn't be enough armchairs to go round (If we're talking of Royal Navy admirals that is)

K your point might stand if Crimea wasn't historically Russian and had not only became part of Ukraine in 1954. Everyone is playing games but if you are suggesting it's just the Russians your perspective is somewhat limited.

Took me time to read all the comments, but I really enjoyed the article. It proved to be Very helpful to me and I am sure to all the commenters here! It's always nice when you can not only be informed, but also entertained!
hometownnationalwa |

I might want to thank you for your elegantly composed substance, its helpful and your written work style helped me to peruse it without any trouble.
http://www.probusiness-ag.com |

Excellent and decent post. I found this much informative, as to what I was exactly searching for.The Article is quite impressive and thoughts been put up has clearly got something to state.
www.radiodanza.biz |