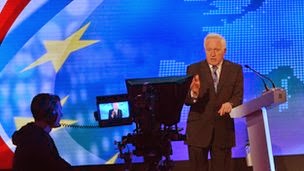 Sadly, the great Dimbleby is past it. It was all too obvious last night that the once incisive and stiletto questioning chairman had lost his touch.

It has been happening for a good few years now. The once sharp host has been slowly descending into a dreamy and casual arbitration. Instead of gripping proceedings and driving politicians to answer tough questions, he has been content to take little part in proceedings. Allowing guests to interrupt and talk over one another he remains silent.. possibly not even paying attention. Doodling tattoo designs on his pad? Reading the best #BBCQT Retweets?
Like an Alzheimer's sufferer he still has good days and bad days, and on his good days can still shepherd a political guest back to the question with polite skill. But more increasingly there are more bad days than good.

Last night Mr Dimbleby allowed the first question to ramble on like a dodgy dossier story for over 45 minutes. And it wasn't even a very insightful question. Just the usual "Are there too many Immigrants" that is a compulsory deployment for Question Time whenever Nigel Farage is on the panel. No light was shed.
David looked very surprised when he looked at his watch and exclaimed that they must push on as time was short. The only person who had been prodded to speed up had been Caroline Lucas who brought a Weekly shop list of wonders that the EU has granted the UK and proceeded to read them all out until the big D awoke long enough to tell her to stop.

The final question about company takeovers was also an embarrassment. Farage wanted to say that EU rules prevent UK government from intervening. The other 4 panelists all jeered that "its all the fault of the EU" "UKIP blaming Europe again" etc..Farage could not get his point across and became quite annoyed as is often the case with. But Dimbleby had been unable to calm the panel and allow answers to be heard. It was farce.

Twice during the show a question from the audience was a plant. One so pro UKIP, that they could only have been an activist. And another, a man who read out a statement that foretold a return to the Napoleonic wars If UKIP won any MEPs.
This is also something that has increased in recent years. A paid up political activist has got on to the show and made a totally partisan speech.  Its not so much Question Time as party political campaign slogan time. Generally a tweet with them holding their party badge/union card/ appears ten minutes later and their identity is revealed. This calls into question the whole format of the show and how, why ,when and by whom questions are chosen.

Its probably time to axe the show altogether and come up with newer fresher ideas for a politics program that in broadcasting years was designed in the Neolithic era.

But, as that is unlikely, C@W suggest a change at the top.

A new chair for Question Time.
Who could this be?
Who has the gravitas, impartiality, journalistic knowledge, political awareness and ability to pose tricky questions with a cheeky smile. A distinguished and recognisable person with a hint of sex appeal?
Who ticks all those boxes? Apart from Russel Brand.


1st and 2nd choices into the comments please.

Andrew Neil by a mile (well, don't know about the sex appeal ... does anyone have a photo?)

actually the auditions are held weekly on HIGNFY. The surprise package is Martin Clunes who is really rather good in the chair. Jennifer Saunders is OK too - and Kirsty Young, & no probs with the sex appeal there (+:

PS you surely can't mean to shortlist Jon Snow, who is appallingly unprofessional and rude

I like the bloke who does Hardtalk. The only really tough. BBC interview show. Buried in BBC news you may never have seen it.

W eall know, it will be re-vamped and if not Sir Russell Bland then another young kiddo pretender will be shoe horned in. Maybe someon from Blu or Katie Price?

Damn, forgot it was on last night. (Not that I can stand to watch it, but the CU competition is fun.)

QT has been poor ever since Robin Day left, and that was because he (RD) thought that it would become unnecessary once parliament was televised. Which just goes to show that (a) it was a long time ago, and (b) the idea that the superior debates in the H of C would render QT irrelevant shows just how far we've traveled in 20 years.

Andrew Neil would be good.

Watched John Humphries stand in once and thought he was good, but perhaps he is a bit long in the tooth.

Leftfield choice - Dotun Adebayo, who hosts the "Up All Night" radio show on Five Live.

Interesting post, but I am none the wiser about the colour of his tie.

To liven it up a bit my choice would be Nick Ferrari, to remain dull Paxman.

Jon Snow knows nothing, so we can't have him. How about the delicious Rose Leslie? Ok, to be serious, Andrew Neil would be good I reckon.

So as not to disturb the established format too much:

If they were still around I would say Robin Day and Gilbert Harding.

John Snow would be good, hurling bouncers at the panellists at 85 mph. With Ken Higgs at the other end they'd soon be back in the pavilion.