It's come to a pretty pass when the Treasury is releasing statistics to assist the referendum debate and they are trashed by their own author within a few minutes. 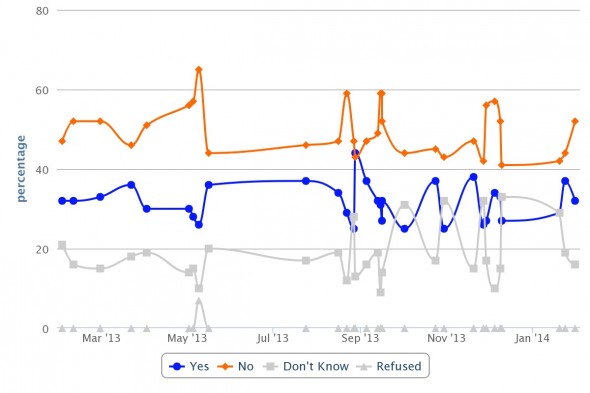 But it did happen today, and I feel conspiracy at work here. At last the Government is coming to terms with the Yes vote improving and deciding that it likes what it sees - which would be the end of Labour as a Government in England, especially with a surging UKIP to challenge them.

With this in mind, the effort to persuade Scottish voters to stay in the Union is half-hearted. I would rather hope this was the case in any event, rather than believe the Treasury is utterly incompetent.

There are times when C@W just completely goes off the rails with the frothy default to Tory tubthumping.

The issue of how to actually get elected is one of them and it is never the Tories fault for being shitt. It's always, client voters, or Scotland skews the results or if only the boundaries shared out the jolly fox hunting crowd?!

There is no majic silver bullet from the 1840s edition of How to win a general election, the Conservatives need to actually get around to offering a vision for the country. I realise that anything that is not just "keep it like it is" is not by definition conservative but this head in sand it's not our fault we woz robbed mentality is insane!

Er, the Treasury competent? Oh dear. Also, many of the figures of anything are rarely reliable. Given the rate of change, uncertainties globally, out of control huge monies slushing about and tax policies in collapse how anyone can predict anything beyond next month is open to serious question.

Is this no longer the home of not believing in anything that might be construed as a conspiracy theory? My (del)/(ill)usions are shattered :-)

The losers in this - apart from the voters - are the LimpDims and Labour.

All that is at stake for the blue part of the government is the loss of 1 seat. Conspiracy does not enter into it unless Dave is determined to get into opposition due to some unknown pile of shit just around the corner.

Watch out for some Red/Yellow noises off to protect their dead hand of northern democracy.

I watched Danny today and agree he was not that convincing, but one thing he did keep saying was that all his figures had been produced by exhaustive investigation and analysis by outside experts - two of whom seemed to promptly say that Danny boy was telling porkies.

Sumo - I reall would ask you read the blod this past week. How would you say I am pro-Tory at all costs on that basis.

Demetrius- the default position is always, and will ever remain, cock-up over conspiracy. due to real world insight into the level of cock-ups experienced versus level of conspiracies.

But to use people who you know are going to come out against you instantly...hmmm..probably still cock-up!

I am firmly of the view that if the Scots secede from the UK, it will be bad for Scotland and bad for the UK.

Anytime the SNP is in trouble with its views and figures, when it is cross questioned closely, it wails "scaremongering". This is the Scots Nats' Get-Out-of-Jail-Free card, and our myopic politicians allow it to pass.

We are about to throw away the Union of England and Scotland, whilst we both retain another Union, the EU. This is absurd: the Scots and English live on one island with an integrated infrastructure, and have a similar culture, legal system, language, and genetics; yet neither of us has anything like as much in common with any other EU country.

The SNP's brand of independence is so bizarre. They never had a plan but who knew they would end up being such unionists?

Is it really all just so that Salmond can sit at the big table and have his photo taken with Obama?


The future belongs to those who can get enough advantage out of a cock-up to make it look like a conspiracy to outsiders.

I’m happy to find so many useful info here in the post, we need work out more techniques in this regard, thanks for sharing.
lincolnmaineusa.com |

These are things that you could not survive without. They include, of course, food, water and shelter. Even here, these should be at a minimum. Thanks.
kelassur.org |