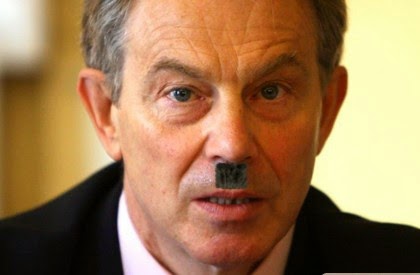 Tony Blair is being interviewed by Der Stürmer and is asked whether the original invasion was a terrible mistake.

"Look..let's be clear here.....invading Russia was the right thing to do. Stalin's communists were not some well respected rulers loved by millions. They were killing their own people. Its a documented fact the Soviet dictatorship murdered several million of its own. And they had no respect for the law or human rights. Many hundreds of thousands were imprisoned without trial or shot after a televised show trial. Many hundreds of thousands more were denied access to basic foodstuffs. I mean..guys..just think.. That maniac dictator even purged his own ruling party! The only political party allowed in that country, I might add.. And  he purged his own red army of its top leaders...
The bolshevik state is not a humane society. And, as we know, there was no democracy there at all. Kulaks and Tartars were very unrepresented in government.

And lets not forget Stalin has weapons of mass destruction like the tanks, artillery and planes and the submarines that we know he possesd. We know because we swapped armaments with him for oil under the Molotov–Ribbentrop Pact.
That made the USSR a militarily very strong regional power. And Stalin was using that military power against his weaker, non-communist neighbours. Japan. The Baltic states. Finland.

There was a very real threat that if we didn't invade within 45 minutes, Stalin would be in Berlin.
Now, some people may say, and in fact did say, "Hang on a minute Chancellor Blair. We are still fighting in North Africa and the whole British Empire and Commonwealth. Surely we should finish these wars before starting a whole new war against a much stronger foe?"Well I say .. events can change.. If events change then action must be taken...It was fine to contain Soviet Russia in the 1930s, through sanctions. through restrictions on trade and such..but that policy was just no longer viable. Soviet Russia was being run by a murderous dictator..Someone who had a proven track record in killing his own people..I simply had to act. So we, and our pact of steel allies invaded.

Now..I believe that invasion was a success. Militarily very successful. In just 5 months we were at the gates of Moscow itself. The Ukraine did initially welcome our soldiers with flowers of liberation.  ..

OK, I admit, there was a bit of a partisan problem in some regions. There were some unavoidable civilian casualties. We sustained some casualties to our armed forces too. And there were pockets of  resistance that proved troublesome to quell.
And , yes I must admit that early on, some of our soldiers kit was inadequate or in short supply. Especially the lack of winter clothing and the under-gunned panzers. But we overcame those difficulties and pushed on again in the spring..


Now, I know you want to ask me about the current situation. Should we have committed forces  in the latest warzone that suddenly sprung up and is causing all sorts of regional conflicts.  These terrorists that are now on the march..
Well let me just say this.  I believe that the declaration of war on the United States of America in December 1941... it was the right thing to do.. True, our commitments in various war zones had spread our troops quite thinly.

The ongoing fighting against the USSR and their allies in the United Kingdom. Canada. Australia. Egypt. India. Malaya. Burma. Poland.  France. Greece, Norway. Belgium. The Netherlands Denmark, Syria. Algeria. Tunisia. Morocco. South Africa. Eritrea, Iceland, China, Iraq, Iran, Palestine, The Philippines,  New Zealand, Samoa, New Guinea, Yugoslavia,  Czechoslovakia,Slovenia, Latvia, Estonia, Lithuania, Fiji, Singapore, Cyprus, Crete, Malta, Gibraltar, Falkland islands, all the countries of the Caribbean,  Bermuda, French Polynesian, French Indochina, Equatorial Africa, Chad, Senegal, Ethiopia Nepal, Trans-Jordan. French Somaliland and Madagascar..Well some say that lot might have..might have been enough ... without adding the world's superpower, The United States of America, to that list.But i believe those people are wrong. And the stability and prosperity that even now, that our forces are bring to areas like Sevastopol and Vichy France mean that it was the right thing to do..This whole ..Stalingrad incident.. It...it... must be seen as just a...a  tiny setback in our mission to bring freedom and democracy to the people's of the world.There can be no backward steps..If anything we should add Switzerland and Sweden to the list of countries we ought to be at war with..There can be no neutrals in the war on terrorism.Now, I really must go...Lovely to see you again, guys.  Help yourselves to drinks..If you have any more questions, Alistair Goebbels of the propaganda ministry would love to answer them....I think he has some fact sheets for you.. I must dash..Got a photo shoot for Hello!  Me and the Spice Fraus! Fuhrer of the year! .. ciao..

And then he shot himself in a bunker,

He was always worried about his "legacy". He has one now.

... and don't forget the banking crisis or did that start in America?

Shouldn't there be a joke in there about the Brown shirts?

brightened up my day - v funny.

Look at that picture of Tony at the top of the page.

Does anyone else he looks a bit last 10 days ?

What a shame TB is unlikely to see this....but even if he did the irony would be lost on him..he's a Christian crusader (don't you know) in touch with Popes and JC Himself.

Its a real shame that Spitting Image isn't still on - this would make an excellent sketch!

What a womderful parody - made me laugh like a drain! Just what's needed on a friday afternoon...