For the first time ever the national side, the labour party, has failed to win any of their opening matches.

Under Ed Miliband’s leadership the Labour party lost out in both the local elections vote and Euro election Zone A-West matches.
Miliband's labour lost out against a struggling, only 55% fit for office , David Cameron and his Toryaguys, and then against UKIP. A team so underrated that FIFA ranked them just 129th in the land – .

Ed Miliband said he was gutted to have to quit so early. “losing the first two means I can’t be qualified to lead the Labour party into the last 2016,” he said.
I thought that against such feeble opposition we would be able to win easily, without really even trying, but thiat just wasn't so."

There have been calls amongst the left wing press for Miliband to resign and make way for someone good.

However a spokesman for Unite, the professional labour MP’s association, made it clear that Ed Miliband would be staying ‘for now.’

“With the Shadow Cabinet team that he had available , a mix of old has-beens and young, fresh faced, Spaddy youths, we believe that Ed did as well as he could. He tried a lot of old, obvious, left wing tactics that sadly, if predictably, just didn’t work out." 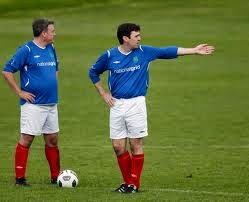 "But we believe Ed is building a powerful team for the future when Labour may once again have world class, working class, politicians, like it did in the 1966 Wilson government. ”

‘Obviously this has had an effect. Who wants to go down a mine when you can become a special adviser straight from university? Write a few silly articles for a lefty think-tank. Be parachuted into a safe rust-belt constituency, and become a junior shadow nobody for nothing important on £70 grand plus a year?”

Ed Miliband faces the Scottish Nationalists in a pointless final contest on Tuesday, the results of which are a forgone conclusion.
Posted by Bill Quango MP

Althouhg, England will never win, but Milli might just!!

To be fair, when Miliband looks at the choice he had available it wasn't great, was it? When he turns to the front bench to see who to bring on he's looking at a lot of so called 'players' that struggle to get into their own local sides first eleven.

So he's made changes and is going to give his youth players a chance.
Owen Jones. Laurie Penny. Euan Blair. Stephen Kinnock and Harry Harman-Dromey

And miliband has missed! A penalty kick and he's ballooned it over the bar!
Keeper of secrets, Andy Coulson , red carded and off. Miliband had an open goal .. Yet his wild swing flew hig above the goal ..

dear oh dear...what a disaster for the reds..