A Mere Scottish Pounder: Salmond Has an Attack of Piles

It is often said that Napoleon was distinctly below par at Waterloo because he was suffering from piles at the time.  Alex Salmond gives every appearance of being a man in the same predicament and it couldn't happen to a nicer chap - a mere Scottish pounder after all, as the Duke might have said.

How else to explain his tetchy and unconvincing replies to the really obvious and inevitable question he's getting on the subject of the currency ?  He has had many months to see this one coming, it's a straight delivery (to switch idioms), yet it has caught him lbw and the the finger is raised. 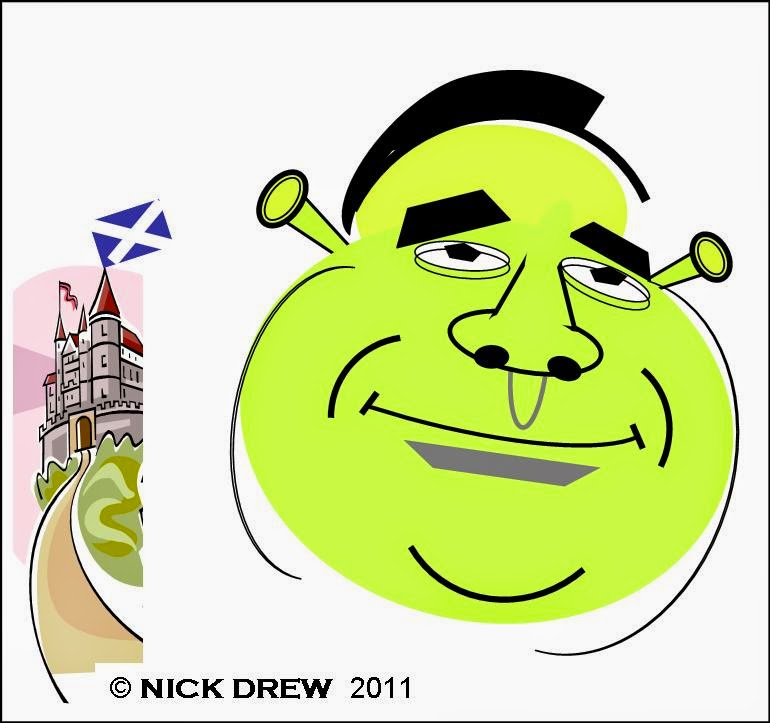 Time was when Salmond held up Iceland, Ireland and the Scandinavian countries as exemplars of what a successful independent nation Scotland could be.  Now it's, errr, Panama and Montenegro for the Scottish Pounder.

Perhaps, as we wait for the next televised debate, he could put on a one-man silly-season show at the Edinburgh festival to keep us all amused.

I think the problem is that there are answers, ones that could be good answers, but deal with an invevitable bit of short term pain.

And I don't think salmond has the balls to deliver such answers to a public that is intolerant of anything that might cause things to be worse, even if it is to make them better in the longterm.

I don't think he gets it at all. Just because the euro is used in lots of countries doesn't mean we want to share the pound in a similar manner.

I don't want to pool all my money with my neighbours who probably have very different ideas on how to spend it and earn it than I do. I'd rather be independent with my cash. Personally I don't want to go deep into debt while some of my neighbours probably think it's a good idea to leverage up as much as possible to get all the houses/consumer goods etc they want.

What's wrong with the Scots having their own currency like Iceland and Norway? Then they can be truly independent instead of the sort of euro-fudge situation which Salmond would appear to prefer.

I think Salmond's mistake is to align with the EU, though that may be just for a while to get subsidies, until a proper economic base is established. I have tentatively suggested that Scotland should link up with other semi-detached countries like Iceland and Norway:

Poor Alex. He can't answer the 'plan B' question because the answer " the euro" is worse than pathetically attempting to pretend their is no plan B.

He should, as you say ND, have been much better prepared for this Achilles.

Its OUR pound, is ok, but won't win any converts.

If I were to advise I'd suggest attacking the government. telling the audience that there is no way, no way at all, despite what they may say, that the government of the UK would allow the Scots to collapse through not having the pound. Westminster, day after a YES, is in talks about how the Scots can be in the £.
Alex knows it. EU knows it. George knows it.

I used to think him a preposterous cheeky chappy, but obviously more intelligent than most politicians.

Has he been ill? Is he just ageing badly? Is he tired out? Has he taken to the bottle? Has he got family worries? A one man band isn't much cop when the man is sub-par.

I venture to suggest that he had a road to Damascus moment when the financial crisis hit. Perhaps the collapse of RBS et al made him think deep down "Jumping Jehosophat - we could have been Iceland! Shit! Better plump for devo max. We'll never win a vote on out anyway, so let's panic those dozy twats in Westminster into making a few concessions"

That being so the three parties have done him proud with offering more devo in the event of a no.

That dozy bitch sidekick of his is a different matter. She's a true believer, that one...

surely, it's the risk that the reviled, spurned English who would "rather Scotland failed utterly than let us have our pound"

the No camp may fear that more than Alex does, but it's the undecided whose fears matter at this stage

the more he has whipped up anti-sassenach sentiment, the more real this sounds - now he has to say, look, these are the great guys who bailed the Irish out in 2008 - which doesn't quite fit with th rest of the rhetoric

maybe he is simply past his sell-by date - happens to many people, in politics & elsewhere, look at Wilson, Thatcher, ...

The very odd thing about the true-believer Scots Nat is that s/he thinks Scotland can leave the UK, yet take bits of the UK with it.

If Scotland leaves ..... it leaves. It will be on its own. Scotland will have seceded from the UK. The new country of Scotland would have to invent (and pay for!) all its own institutions. It's almost like a dead parrot, and Salmond is the pet shop boy.

@Budgie: isn't that how divorce works? The woman leaves and takes everything she wants.

I think Sebastian Weetabix has it. I can't see Salmond's recent performance as anything other than him throwing the referendum. I think the last thing on earth he wants is to win the independence vote. A healthy Yes vote, in the mid to high 40s will suit him fine and position him exactly where he wants to be, the King Pin of Scotland, the darling of the pro-independence camp, with devo-max already in the bag, but no responsibility of actually running a country with no safety net. He wants power, but no responsibility, proverbial to the last.

Wonderful article! People that visit go through your current content will quickly realize a great deal of valuable along with helpful guidelines.
homewoodappliancerepair.com |

Good post but I was wondering if you could write a litte more on this subject? I’d be very thankful if you could elaborate a little bit further. Appreciate it!
chautauqualakeboatrentals.com |

Positive site, where did u come up with the information on this posting? I'm pleased I discovered it though, ill be checking back soon to find out what additional posts you include.
http://www.food-play.org |