How wrong can you be? 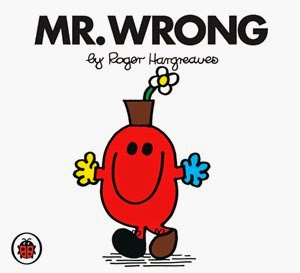 I seem to have lost my touch.
Anytime there was a story in the media, that I formed an opinion on, I have been wrong.

I expected that a baker who didn't want to bake a cake for a client, for whatever reason, wouldn't have to. I was wrong.
I thought that Douglas Carswell's principled re-election stance would prevent any followers. Wrong again.

I supposed that a bisexual husband who handed a brown bag to a taxi driver, who then killed that man's wife, would at least have to face trial to explain why he went on online dating sites the night after her death. Wrong again.

I guessed that a man who fired fatal shots through the en-suite bathroom door would be guilty of manslaughter at the very least. Nah...

I thought that the last thing the government would do to revive the economy would be to give the housing bubble another pump. Another miscalculation.

I guessed that the Scottish Referendum result would draw a line under independence for 20 years or so. It didn't.

I thought England's super dismal performance in Brazil would necessitate the usual change of manager. Oddly,  that never happened. And I thought Louis Van Gaal would have made a blistering start at Manchester United. Instead of the mud like slog they have been making of their season.

I assumed that government would not ban smoking in cars with children on the grounds its largely unenforceable. They jumped at the chance to introduce a pointless law.

I thought Putin just wouldn't push it too far and try and annex the Ukraine. He tried.

All in all .. I have been off on almost any decision I have thought about.

A pretty sorry state of affairs.

The only silver lining is I also thought that by now Miliband would be 7% ahead in the polls and looking at a 50 seat majority.

But you're right to admit it. Others make predictions only to abandon them, at least you're honest enough to revisit them.

Wrong or right it's a good read.

I dunno about 50 seats, but I expect the next govt to be Labour. The constituency boundaries, the postal voting fraud, and the keen support of the Beeb are all mighty helps. But it'll mainly be caused by the stupidity of the electorate, I suppose. The last Labour govt gave us needless, wicked wars that resulted in mountains of dead, and the feckless UK arm of the great financial crisis. Why not try them again, eh?

I know the feeling.

I feel like I'm living in the White Rabbit song, "When logic and proportion have fallen softly dead".

I have resigned from the post of the old man of the family who has all the answers. Now I just have one question: "What?!"

We have the looking glass the wrong way around. If only we could live blissfully as well as ignorantly.

Come to think of it, Santander expect the next govt to be Labour - look at the harpie they've made Chairman.

I've gone so far beyond being dismayed and outraged that I now wish I could take a stupid pill that would return me to the blinkered liberal mindset I had through my 30's. The world, in short, that the MSM and almost everyone I know happily lives in.

How I long to believe again in the magic money tree.

Steven_L said...
This comment has been removed by the author.
1:08 pm

Well I was right about Sri Lanka beating England at odds of 4/9. That's a nice Xmas bonus.

I've now noticed William Hill are offering 25/1 on any batsman to hit 6 sixes in an over of any international match in 2015.

Lets put this into context. They are only offering:

In a world cup year with the following mismatches:

Plus Zimbabwe and Bangladesh are playing a few games each.

Mr Wrong? Does someone have children?

Anon 1. There were other things that dismayed me. The drinking whilst pregnant test case. The EU ruling that we must make payment of child benefits to overseas citizens.
aBU WASSISNAME being found not guilty. Cliff Richard escaping the Yewtree net..

Add your own surprise decisions.

Dearime: The Miliiman is coming.
But not with a 50 seat majority.

John Miller: Yep, that;s the one. We who know nothing and mustn't be obeyed.

EK - The telescope the wrong way.. It really does feel like that. Decisions that just seem so obvious to me are 180* when someone rules on them. Its as if the ECHR has taken over the country.

DM - Santander expect Labour? They are a weird bank anyway.

Anon - Ed Balls has made it quite clear that if Labour win, this time, they will only go to the magic money tree if they really have too.

Steven_L Hmmm.. cricket is something that happens to other people.
On football, no managers fired, and its Christmas. Quite an astonishing result.

My ,"Super Worm is super smart
Super worm, does a super fart..."
line has recently earned me whatever the small boy equivalent of the best comedy award is.

The Mr Men are deep and amazing - more than any of your think.

Have you never read these?

Well, I was wrong when I predicted that the SNP would get their "Yes" vote.

But come to think of it, with Cameron's ill-judged (as ever) give away the SNP have got independence in all but name.

BQ said: "Ed Balls has made it quite clear that if Labour win, this time, they will only go to the magic money tree if they really have too."

You know what they say, Budgie.

Two Eds are better than one.

BQ RE 3.03
ECHR - as part of the EU setup it has primacy in the UK. So a sort of (invited)take-over. I believe the UK EEC entry negotiating stance was 'to swallow it whole and swallow it now.'(Have you seen the reports on latest ruling on fat and disability?- worth a blog topic all on it's own).

Santander - I reckon Gordoom Brown effectively bailed them out when he gave them the Abbey National accounts.

Bill, don't feel bad, all these "decisions" are a symptom of the general malaise caused by so many laws that no-one will be able to move soon without causing offence and thereby committing an actual offence!

Anon(last one) mentioned the new Fat Employee Decision (FED) you'd better take a look around your premises for narrow doorways, chairs and aisles otherwise you will be discriminating against the FED! and next the Fat Customers.

We are lost, it's all a symptom of an over sophisticated civilisation heading towards it's end in an extra-wide handcart. :(

Every year I believe it can’t be possible to fit more “occasional tables”, scatter cushions and candles in our house but apparently the laws of physics stop at our front door.

I thought the Lib Dems and Tories promised to cut spending.

Now I realise they just assumed a mega-boom.

I find the FED amusing when compared with the North Sea's new "Extra Broad" classification for the offshore workers - where they are measured across the shoulders, when any fule kno the problem of their egress from the helicopter lies not in the breadth of their shoulders, but the circumference of their beer guts.

Just read up on the tubby ruling.

That's it! That's the end..Being morbidly obese is now the responsibility of someone else.

If you stuff your face all day , as in a classic Simpson's episode, Then you poor lamb..we'll make a dedicated workspace and easy hours and ground floor only working for you.

And now I realise I've been wrong again! Because I wasn't wrong in the first place! I was wrong to think I was wrong, when all along, I was right!

Anyway .. it all makes me want to emigrate or vote UKIP.

lard-arses are the majority now BQ, & UKIP are a populist party

fat-boy Kim is the future of political leadership

@BQ: Anyway .. it all makes me want to emigrate or vote UKIP. You're learning!

Or make a stand against it with Russell Brand if possible and make sure the press are there....wonderful publicity for your business BQ