Obama get it right ? 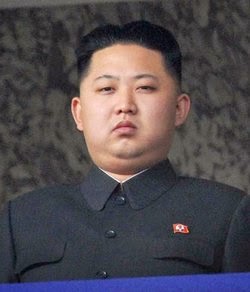 Obama, may, whether by accident, or design, have done the right thing. In his battle with finding ways to contain Crazy Kim and his dictator state, he has actually followed the best possible course.

Rather than being a series of flip-flops between outright cowardice and big nation bullying with excessive force, as many first thought, the USA has actually done all the right things in the right order.

If we here at C@W put on our digital wigs and adopt armchair lawyer mode for a moment consider this ..

Firstly, it was extremely poorly judged of Sony to allow the making of a film that depicts the assassination of a current world leader. in the first place. It was even more silly to think that there would be no repercussions from lampooning a dangerous megalomaniac , who demands total loyalty under pain of death.

Secondly The Pyongyang Cyber warfare army launches an online attack, revealing some salaries and private emails that upsets celebrities and  causes amusement , and a little bit of worry about security systems, in the west.

At this point, what can POTUS do? The USA hasn't been attacked, as such. This isn't 9/11 with 3,000 dead and billions of dollars of damage done to the economy. This is a bit of a hit to the share price of a foolish company. So Obama says "I am annoyed about this..And will investigate"
The business world is a bit shocked at this lack of response to their plight. But Obama is right. What is going on at this stage, is a possible business to business issue, albeit a probable, though unproved, nation to business attack.

But then Kim Kong, as usual, oversteps himself. A man without restraints cannot be restrained. Except, paradoxically, by assassination, Caligula style.

So the Great Leader says he will bomb any movieplex showing the despicable "The Interview" film.
Sony, fearing no support, and worried about the legal implications in case the supreme loon, or one of his eager to please henchmen did actual detonate explosives in a cinema, pull the movie.
US cinemas tend to be in shopping centres. The civilian causalities, over the Xmas holiday , could be huge. The legal bills even more huge. And they think that O'Bama is only going to play golf and leave them to fight North Korea on their own.

But now the President and his advisers have an actual threat to deal with. A threat from a known source. Little Kim.

So they treat his tantrum as any tough love parent might, by shutting off his internet. The North Koreans, who have no doubt told tubby that their IT systems are impregnable, have to explain to the God King, why he can't access Top Gear on Iplayer.

The US response was measured,reasonable, and had just enough menace to imply that if the Magnificent Light of the Universe didn't pipe down, he might find his surfing privileges permanently revoked.

Sony Pictures felt reassured enough to give a limited screening to their probably Godawful comedy film. Probably also after a very careful security review of the venues chosen. With Homeland types in the audience just in case. And they had all the publicity they could ever dream of to promote it.

And there the stalemate ends, as is usual with the North Koreans.  Kim has blustered his way through a crisis and at home appears to have caused major upset to the Great Satan. He has not been left without  face.
The US, and China, have reminded the world's greatest man that there are limits to his fantasy. And he better not push too far.

It doesn't mean that he won't try. He can't be controlled except by the Chinese who prefer not to have to deal with the Korean problem just yet.

But, in terms of actions and counter actions, I think the foreign policy flapper that is the Obama Presidency, did good.
Posted by Bill Quango MP

there are several other positive take-aways

- a gentle wake-up for corporates on the cyber-vulnerability fronts, tech and politico (better to have a storm in a teacup than seriously broken crockery)
- ditto governments
- nice narrative of How O'Bama Foreign Policy Works: something happens; there's a pause; then there's a concrete response, including some action

most sensible countries would, on reflection, welcome being seen as behaving like that: fits rather well with speak softly + big stick

"The Pyongyang Cyber warfare army launches an online attack": there is no evidence worth tuppence that the hacking had anything to do with the Norks.

That's not my understanding of what the non-FBI cyber security people are saying.

They are saying they are surprised the FBI could get so much information so quickly.
But seeing as the FBI have not released any information on how they came to decide it was the North Koreans who hacked, those cbyer security firms know no more than we do.

for all we know the FBI might have pointed the finger at the Norths because of the several hundred thousand of their own experts they had all working around the clock to discover the source. They could have been so quick because they had been given unlimited access to the US Treasury funds just to find that info out.
Or they might have known so quickly because the geek who hacked the Sony files from inside North Korea is a CIA mole and he just told them.

In the end, the Americans are pursuaded that the best way to deal with Kim is to expose him to his people as a fraud and a wuss, rather than kill him.

Very much so. And that tells us?

As this has progressed I'm less convinced this was N. Korea and not just a lizard squad/lulz sec style hacking group having a bit of fun.

Lizard squad had already claimed responsibility for getting a plane grounded that Sony Entertainment President was on in August:

They've since said they passed to Guaradians of Peace the login details to get into Sony:

This is the group that are behind the DDOS that bought down XBOX and playstation over Xmas and we know N Korea internet was bought down by a DDOS and these guys have been linked to that also:

Here's some more on the subject:

Now Obama showing mastery at foreign policy or being embarrassed by reacting to what could be a group of kids causing havoc in the name of lulz - call me a cynic but the latter does seem more plausible to me!

What swayed my view was when the terrorist threats were made, that's not the way Kim Jong does things, but it is the sort of thing you'd expect a socially inept 16 years old kid who's locked up in the bedroom of his mum's (dad long since left) 2 bed mid terrace home in Grimsby to say, as it will get him 'mad props' from their piers.

However will anyone ever now get arrested for this or would it be too embarrassing for the US government/FBI? Better to lay blame on Kim than admit that some pesky geeky kidz have gotten the better of you!