What Is University For? Weekend Rant 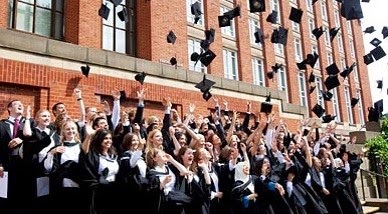 Reports that British universities now award Firsts to 19% of undergraduates, and 2:1s to 70% (sic), do not inspire confidence in their quality control, still less represent a cause for rejoicing at standards of tertiary education. 70%!

Apparently, anyone graduating these days with a Desmond is no longer employable, so we are reduced to awarding a piece of paper that means no more than "(s)he didn't make so much of a nuisance of her/himself that we feel inclined to blight his/her life".

In my day, less than 10% went to university anyway.  Now it's approaching 50% (bloody John Major, that was), what do we expect ?

The answer, of course, is that an undergraduate degree course is just the backdrop for a low-risk growing-up experience (of sorts) in much the same way as it is in America, where first degrees have long counted for almost nothing.   Post-grad work is what matters: and indeed all the best UK establishments are mostly concerned these days with attracting the best researchers and post-grad students, ideally from overseas and paying top-dollar.  (Or indeed some very dubious overseas post-grads, see the LSE Gadaffi scandal.)

Not only are undergraduates being allowed to twiddle their thumbs, they aren't even revolting, in the good old sense of getting noisy on behalf of free speech etc.  This chilling piece from the Speccie would be enough to indicate the whole game should be wound up, were it not for the strong suspicion it is somewhat overstated.

Prima facie, there would be scope for a major clear-out here, except that one would need first to figure out the economics.  Hundreds of thousands of kids are being suckered into borrowing tens of thousands of pounds, to support - what ?  A major employer of middle-class pseudo-academics and adminstrators, that's what.  NHS mk2, in other words.  Tamper with that at your peril.

Oh, and of course loads of these kids (a) will never repay the loan anyway - so it's just a taxpayer funded, public-sector merry-go-round:  (b) will, however, have learned at least one thing - a very dangerous blasé attitude to debt, the macro-outworkings of which won't be felt for a few years, but could be very bad indeed.

Education is our greatest export, hadn't you heard !

At the risk of sounding like a middle-aged curmudgeon, yes, agreed. It's a load of crap.

(And I've got two first class degrees from back in the day when they weren't handed out like confetti.)

There's just one thing I say when the future of the universities comes up:

Dissolution of the Monasteries.

A few years in a university in one's late teens might be worth a punt but pushing more people into graduate education is a catastrophic abuse of youthful naivety.

After 4 years earning a bachelor's degree, many of the brightest are corralled into research degrees. These students enter the real world at almost thirty years old having accumulated no capital at best and with few marketable skills that could not have been acquired in the workplace.

Not only does this feel like a huge misallocation of youth and talent, but it's also led to the de facto nationalisation of an enormous amount of research activity that has historically taken place in the private sector.

The beneficiaries or this system are a small cadre of tenured profs who can capture the rewards of their research without carrying any financial risk. Naturally, a great deal of value is not captured at all with such lopsided incentives.

A further irritation is that many tenured profs run their research teams with the sort of unflinching tyranny that academics scream blue murder over should they perceive it in the private sector.

You basically make money from land, labour or capital.

In (vv simplistic terms), If you want to up gdp by 10%
- Invade somewhere and take over the land / oil wells etc
- Have lots of children
- Get more capital.

On the topic of 'well, that's 4 wasted years'.
I would say to you (I had to use that phrase) - it all depends what that person would have been doing otherwise - and there really is no way of knowing.

The current price of a degree - at least 30k fees + 30k living costs should be enough to concentrate anyones mind, certainly enough to make them seriously work out if a degree is the right thing for them.
So there is a market-based solution in place.

On the topic of 'well, they just go off and count paperclips for the NHS'.

Writers in the 70s used to moan about the best grads being hoovered up into the ad agencies.
Then in the 80s it was the banks / oilers.
Then in the 00s it was internet start-up social media sites
In the 10s Posters above discuss the tendency towards postgrad work.

I would say that any sector that is able to outbid all the others for talent is highlighting a sector that is going to have a market correction as there is clearly too much money swilling around.

On the topic of a very dangerous blasé attitude to debt

That attitude of walking away from debt, going bankrupt and starting again is one of the things that some say has helped the US become the success it (relatively) is.

Some degrees must still have inherent value as regards being an indicator of being a smart person. Naval Architecture for example. Just how much can you dumb that down? But why do a degree in a European language when you can just go to that country, live work and study there, hell even get a degree for a fraction of the cost and end up proficient to a far higher standard?

The "degree" market is not only being exploited by the young. Know a retiree who has taken on a loan to do a degree with little or no expectation of earning enough to trigger repayments.

And AFAIK the debt dies with death.

So all you middle-aged curmudgeons with your mortgages paid off and handsome amounts of capital can go back and do the medja studies you always wanted to do.

Do Art and you can state at naked young women without getting arrested.

Lilith, you can dumb anything down. The way you do it is to recruit less able students, and another is to give them less tuition. Less tuition in the form of fewer weeks per year, or less hours per week. You can set easier examinations, mark them more leniently, and then adjust the criteria for 'pass' or any grade you care to name. Trust me, I've seen all of these done.

I suspect that the reasons for the expansion of higher ed include:

1. The assumption that a technocratic society needs larger numbers of educated people (it does), and that the place to train them is in college (not so certain);

2. The need to disguise unemployment figures - see also ROSLA in the 70s and the more recent push to have under-i8s in college if they're not in employment or training.

3. The use of education as a way to keep people busy so they are less likely to commit crime or partake in public protest and subversion.

4. False logic: when 5-10% went to university, graduates got good jobs, so the more you send, the more good jobs there will be.

Some of these 'degrees' (mine included) are just to save local authorities etc from having to pay for on the job training.

They don't care if you have a 1st or a 2:2, as long as you have exemptions from the exams they'd have to put you through.

I'm convinced my 3 year degree could have been done in 1 year had it actually been 'full time'.

There were some proper thickos on my course that flunked their A levels, got 2:2's and now earn £40k a year managing council regulatory functions.

You know I was in education. Don't even start me on this topic. Good post.

I really benefitted from my degrees. But the main issue in the UK was making polytechnics etc into Uni's. Now it was so long agao that students today do not realise the pap they are being sold.

Grade inflation is sad to hear about though, well done Nick for pointing it out. So, a Gove for higher education then? Fat chance sadly.

Andrew - some great food for thought there, ta

The first one, did squit all for me, even though from a top 5 Russell Group, the postgrad was worth it, I self funded that one before all this loans for all bollocks.

What is going on? Education is big businss. God knows why, but British Universities still have good reputations abroad, hence you see forgeign students come here but also all the foreign campuses expandng with their university "brand". See all the offshoots of provincial uni's in places like China, Malaysia etc. etc. No one's gonna be stopping that gravy train just yet.

iall the offshoots of provincial uni's in places like China, Malaysia etc

Isn't it just another debt-fuelled bubble, only the debt is being sold to 18 year olds with no life experience ? Swansea are building a giant science campus, nearly the size of the existing one, on the east side of the bay. Driving through Brum, Aston are putting up snazzy towered student flats that would be a million each on the Thames banks. The economy is still afloat on debt.