Shortly after the banking crisis a French government official openly lambasted the country's treatment of visitors.  France, he said, was notorious the world over for the sullen way in which foreigners' well-meaning attempts to speak the language were greeted, the unhelpful responses to simple requests for information or assistance.  We need the tourist dollars, he said, and this nonsense has to stop. 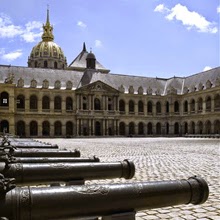 I don't know about you but my observation, calibrated over forty years of continuous experience, is that this injunction pretty much had the desired effect.  Italy is still friendlier, but France - particularly Paris - has been transformed.

How reassuring then to find a bastion of the true Parisian spirit.  For the first time in a while I visited the fine Musée de l'Armée at the Invalides this week, and I can report that they stage an accurate historical re-enactment of traditional Parisian dumb-insolence, circa 1980.

(At the other end of the building however, the attendants at Napoleon's tomb in the Dôme des Invalides were letting the side down badly, being cheery and helpful.  They were Poles, though.)

The Musée is great.  Its treatment of the Seven Years' War is concise:  "The battles were inconclusive.  France ended by losing nearly all its overseas possessions."  How apt.

Email ThisBlogThis!Share to TwitterShare to FacebookShare to Pinterest
Labels: france

The rudest treatment I've ever had as a tourist was in Paris. "Vous etes Irlandais, Monsieur?"

Living close to a part of Lincs which is supposedly overrun with "Poles and East Europeans", and from where dark tales of "they take all our jobs" emerge, my opinion (FWIW) is that they're welcome here.

In my experience they - particularly the Poles - are almost universally non-threatening, well educated, well mannered, pleasant, hard working people. Sure, some might seem a little stand-offish but it's largely because they tend to keep themselves to themselves to avoid negative sentiment from "da locals". They're of us; we have enough shared cultural history (and martial history too) to give a real basis of commonality. They learn English - more than can be said of many of our own young people who emerge from school barely able to grunt in some sort of noise that might be something like English.

When one pauses to consider the alternatives - the dangerous hordes of non-English-speaking, unemployable believers in violent fairy tales, many of whom seem to have a preference for very young white girls, and who come from a world that has no shared cultural history and almost no shared common values - I really think we're blessed with the Poles. Lovely people, and if they can work a little magic on the French too, so much the better.

I can remember first meeting the East Europeans back in 2000 odd.
Getting a minibus to take the them 100 mies to another Rush job.
Aat 5 am I artived and asked my deputy how many we still waiting for, to set off for 5.30am.

None.. They are all here.

I had said 5.30 to enable us all to leave at 6am, in the usual English, someone will forget, or oversleep, or go sick , kind of way.

I was astonished to realise I had arrived last.
They worked hasrd ahall day. Declined any breaks, and despite poor English, were polite and pleasant and efficient.

I've been more than happy to employ them ever since.

Mangetout Rodney Mangetout
That’s about my level of French and I have no intention on improving it. Much to their BITTER disgust, the language war, was probably the biggest battle they lost but strangely for the French, they still haven’t surrendered (I think this is the root of the problem). They are the ultimate socialists, stay at home (mainly because everybody else speaks the wrong languages), do sod all work and expect the rest of the world to pay for their lifestyle. While being the major recipient within a rigged EU, they are still the most likely to bring the whole thing crashing down. (Yes it’s a generalisation but they are the one nationality I haven’t worked with, in the different countries I’ve worked)

The Poles on the other hand, very friendly and willing to do anything to make a crust. They have taken their national dance to bars in every corner of the globe. It’s a gravity defying marvel. If you are not impressed that they can hold those poses, while only hanging on with one leg, you try doing it while covered in baby oil, unbelievable ;-)
Agreed Bill and they can type:-) Have we been on the Vimto?

Seriously the Poles and other eastern Europeans are a pleasure to work with and a work ethic that should be an example to us all. It’s just a pity we can’t get more of them in to the teaching profession (repeat after me, I go to school to get an education, so I can get a job, which will pay for the things I need).

I was chatting to a Polish barmaid in Norway (she quickly switched between, Norwegian, English and whatever language her boss was speaking and it wasn’t Polish)
I asked “do you not miss your family and friends, working so far from home?”
“No, my eldest brother is in construction in the US, the second is working as a waiter in Greece, and my younger sister is a cleaner in Italy”
Shocked, I asked “ so when was the last time you were all together?”
“Last Christmas, We all go home for few months in the winter, to my parents’ house in THAILAND.”

Disclaimer
Bill Quango MP is in no way connected to Suffragents joke about pole dancing.

Didn't want a scandal and upset the sisters, this close to the election

BQ - My boss tells me to be at work suited and booted at 3am I'm there - as are all my mates.

One minute past midnight ? You got it, boss !

Punctuality in the early hours isn't a skill exclusive to the polls and 5.30am is a lie in for me. Seriously.

Average start times are around 4am and we provide our own transport getting there.

I only mentioned the time as the usual start time was 9 am. So5am was early beyond the call of duty.
Usually I would round up my best crews but this was an agency.

Having never worked with any Eastern E's before I was suitably impressed.

To give an example, in the same week an English lad claimed he needed two days off for cancer treatment. Sounded suspicious. So when he returned I asked him which hospital he went too. And then which ward?

"But what was the name of it..they call the wards by an actual name..?"

then BQ's trademark tearing up of his notes and dropping them into the bin.. and then the "I'll tell you what..Shall we pretend this bit hasn't happened, and we can start again? .. without all the bulls**t ?"

A drearily common sort of untruth from the home grown. Maybe the Eastern European's just haven't the English skills to attempt such deception.

But I have found that they work harder, and better, among the younger ages.
Once you start looking at your 35-60 year olds there isn't that much difference. In fact UK are probably better, just for their language skills.

But down in the minimum wage zone, EUs I find, are much better.

Oh ..and not Vimto - its ouzo here. Tastes like bad cactus water. But does make the head fluffy!

Back to Mr Drew's point .. Last year a French waitress told Mrs Q - Talk English!" as she was trying to mangle her way through some menu.

"What did I say wrong?" She asked, upset to be shoved off her
"Nothing..They are just like that"

One time, in Paris I went to a stall ad asked for a coke.
"comment?"

more shrugs .
Lots of pointing .. the bloody man only sold coca cola..nothing else.

I used to go to France 3 or 4 times a year during student days for a week or two at a time. Friend's dad had an apartment. We went over on the £18 magic bus.
COCA .. Tosspot! Everyone in the world says Coke or coca cola. EVEN in Paris.

Isn't it typical of our neighbours to only act upon the bleeding obvious after a diktat has come down from M le Commisaire?

...and can you imagine the reaction if a British minister told people to be nicer to tourists??

imo the famous rudeness is mostly a parisian thing.

i suppose if i lived in a place that should be a world capital but acts more like york, i would be a bit grumpy.

having said that, they have v.v. strong regional cities ( lyon, bordeaux ) but that may well be because they are on major trading routes to somewhere else, whereas liverpool, manchester arent.

my favourite - and it was 30 years ago, which is my point - was in the Musée Rodin. The cloakroom attendant stuck her hand out for payment, and I gestured to the prominent sign saying Gratis, no charge, no tipping etc etc

so she dropped my camera

I remember a few years back listening on the Radio 4 Today programme to Jack McConnell when he was First Minister in the Scottish Parliament. He was saying that Scots had to stop being rude and offensive to English visitors because the English were an important part of the Scottish Tourist Trade and he didn't want Scotland to lose English money.

Note that he wasn't concerned that it was wrong to be deliberately rude and offensive to (specifically) English people, just that it shouldn't be done to the extent that it cost Scotland money.

I thought that spoke volumes.

I always quite liked the French, travelling to Paris was always a thrill, as was London at one time - when it was ours.

Being a Yorkie, I recognized kindred spirits, the French ever so slightly sniffy ways intrigued and amused in equal part and I always thought to myself - well it's your country people, not mine.
They used to rib me about my posh way of speaking French...BBC and accent, une pièce douce - se moquer de mon anglais .... "vous avez un accent bbc, n'est-ce pas?"

I loved it and them.

I recall a visit, we were a tad lost and we happened upon a unsteady but walking stiffly upright. A lady of some senior years, we started to ask in French she frowned but immediately after her face lit up.
Ah you are English she fired back in a perfect idiom and insisted on walking us to our destination. I shall never forget her kindness and solicitousness - a lovely old gal and we were the ones who felt honoured.
Though, sadly tis a while since I gazed struck by Notre Dame, tarried on the boulevard Haussman and in the Luxembourg. I miss it, whether it misses me, is another matter though I always was welcomed back.