The debate of the 2nd division. 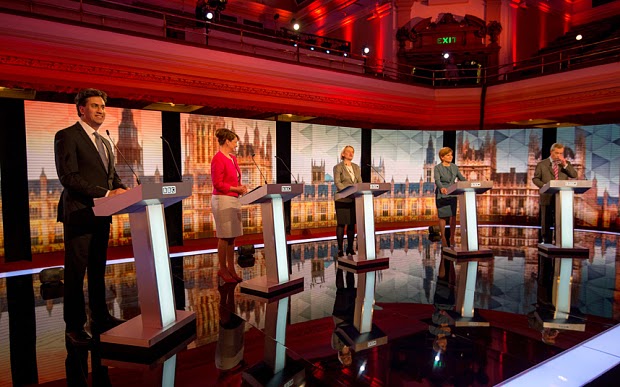 The five party leaders not currently in power just had their debate. Though not much debating went on.

More a load of unsubstantiated claims. Counter claims,. Accusations and shouting. They started off by all unanimously attacking Cameron, who decided against appearing. Clegg and the liberals got away Scot {SNP} free. Possibly as all of the people behind podiums know they are going to need the Liberals if they are to form a coalition.

Once the attack the Tories was out the way , it was 4 vs 1. And that 1 , was Miliband.  The danger was always that the Labour leader would represent the existing establishment. he was accused of being in favour of austerity and immigration caps and not spending on the poorest..
This was a very left wing audience. And Miliband had to make sure he stuck to his centrist-left of centre stance and not be forced into a who's more 'progressive ' argument.
{All four left wing parties used 'progressive' 4 or 5 times in their opening 1 minute address. I was hoping Nigel was going to say he was a regressive. Just to wind the others up.}

Miliband did well. He was perfectly sound. He was attacked from the far left, for not being socialist enough. And from the right by UKIP.  But he may well have been better to have followed Clegg and Cameron and not appear at all. It would be like Cameron debating 4 Farages. Not worth the risk of being cast as a metro middler. I suspect if Miliband was in a stronger polling position he wouldn't have had to do this debate.

Sturgeon was strong again. Offered Miliband a sort of Von Ribbentrop-non-aggression pact where they would defeat the Tories together. he sort of declined..sort of.

Bennett was as incoherent as ever. Takes a breath in when she should be expanding out. A poor speaker and a poor debater. She even mentioned Caroline Lucas at the end. To remind us they do actually have a more popular and much better spokesperson.

Leanne Wood was alright. If you like that velvet glove sounding communism. Her party is  as barmy as the greens. She said "Wales has millions in poverty." Mostly caused by her lot, If her policies are anything to go by.

Unless you are already a supporter. In which case he came across as determined, focused, unyielding and right.

For me , I would have used the opportunity to try and gain new UKIP supporters. UKIP seem determined to just keep reinforcing the beliefs of those they have.

On the audience, Farage called it a typical left wing audience.
And it was.
Dimbleby stepped in to say that the audience was chosen by a polling company to ensure a balanced reflection of the parties speaking.
So Farage was right...80% left wing. It certainly seemed that way. But no one wins a contract by shouting down the client.

Why does the BBc have it's own special definition of balance that differs from the usually agreed one?

Nigel didn't even try to win over the studio audience. He was only interested in the TV one. I doubt he won many undecideds over. But he has a knack of playing wild cards and winning. i thought he was poor in the other debate. But UKIP saw a slight up swing. Today he got a million quid from the Daily Express, so he will be celebrating regardless.
Though what can he do with that cheque? The billboards are booked up. The TV ads done. The flyers one out. Postal voting begins tomorrow. Its a bit late for anything now.


What did we learn ?

That Cameron and Clegg safely watching at home and laughing themselves to tears made the right decision to completely avoid this ultra left bun fight.

You say that Nigel didn't even try to win over the studio audience. He was only interested in the TV one. To me that was the way to go especially with the audience so blatantly stacked in favour of the other 4. There was absolutely no way that he was going to win over any of that mob.

As it stands these 'debated' are a farce anyway but then the UK has degenerated to a 'Britain Hasn't Got Talent' type of culture and maybe for the next election this contest should be like a gladiatorial contest where the winner - the last one alive in the ring - takes all, should get a massive TV audience.

To what end who knows, as BQ points out, it's too late to order new leaflets to be printed and circulated. On the subject of UKIP leaflets there was one rather mournfully stranded on the pavement in my estate the other day, so I stopped to look at it. It was basically a rant, of the quality you see on Telegraph comments sections.

A good way to sort out the deficit in the next Parliament will be to give Wales and Scotland fiscal autonomy. Let them cut their spending to the amount they can raise in tax. I note that Ms Sturgeon was quoted arguing against such a move, I wonder why?

I see that an anti-UKIP poster campaign is under way :

"Run by Movement Against Xenophobia (MAX), the campaign features 15 different posters, showing migrants with different occupations under the bold heading “I am an Immigrant”.

The posters can be seen at railway stations across Wales, and aim to depict the contribution of immigrants to the UK, by containing simple captions like “I am a brain surgeon. I have saved 2,000 lives”.

Nazek Ramadan, executive director of campaign group Migrant Voice, part of MAX, said: “People actually need to know this is what migrants do, and that they do contribute but people don’t hear about it.

“For example, if you take migrants out of the NHS, it will not survive..."

I'd love to know who's funding this organisation - I imagine it's the taxpayer, EU or wealthy business types - perhaps all three. Their website's a bit vague on that subject.

"Migrant Voice is a key partner in a number of international initiatives. We are currently involved in the Face2Face project, co-financed by the EU through the European Integration Fund.

Laban: Its a shame that for ten years debate on immigration was shut down.

Instead of showing what immigrants offer and tackling the abuses in the system, nothing was done at all.

And it took a ground swell of discontent, firstly through the BNP then through UKIP to force the governments to at least acknowledge the immigration issue.

OK, so they can't do much about it. But just ignoring it and insisting it wasn't a problem has caused this current fracture.

Ivan: i read elsewhere that that was UKIP's game plan. To shore up the flagging vote.
But I think his abrasive manner ,deliberately provoking, alienates twice as many as it attracts.

I think he's wrong. But if he gets 12% of the vote he will have been right.
If he gets under 10% then his strategy was wrong.

Jan: I know ..but there is an election. And this was sort of important. Sort of.

Blue Eyes: A good way to sort out the deficit in the next Parliament will be to give Wales and Scotland fiscal autonomy

Ha! They'd have to use what little they could raise in taxes to build walls and minefields to keep the 'workers' in.

"I'd love to know who's funding this organisation - I imagine it's the taxpayer, EU or wealthy business types - perhaps all three."

"He is Canadian and has worked in the UK over the past fifteen years with Oxfam's UK Poverty Programme and previously with Local Authority and European (EQUAL ESF) initiatives around migrant/refugee policy, integration and communications."

BQ, you mean like in the Russian quarter of Berlin?

What a good idea!

What's the point of that last-minute donation from the Express? My guess is that it's meant to be a highly visible public endorsement, done in a way that the rest of the media will be likely to report. It's probably also a publicity stunt for the Express.

Electro-Kevin said...
This comment has been removed by the author.
7:40 pm

Yet again the conservative minded people of this country went unrepresented by their party.

Clearly Nigel Farage doesn't have a PR man (spin doctor) Spin doctoring is what the great British public are sick of so it could work out for him.

As regards the Immigration posters. I've seen them.

They play on the same old left wing dishonesty and lies. That the immigration argument is about race and hatred. Well it bloody well isn't.

I'm a claustrophobe, not a xenophobe. The country is full and needs time to adjust and settle before we admit any more.

As regards Nigel Farage coming across as nasty. Well. I didn't notice you criticise the other panelists for accusing Nigel Farage of xenophobia and incitement to hatred.

That was pretty nasty and ill tempered if you ask me, and I'm actually amazed at how composed Farage was.

To remind you that incitement to racial hatred is a crime and that accusers should either put up or shut up.

Of Farage accusing the BBC of being biased ? Well hasn't just about every reader here noticed it ?

It seems to me that being quiet about it hasn't got us very far. The Left have had full run of the public broadcast media for decades. Time it was called out for it.

And as for shouting down the client...

... well David Cameron's the one with form for that !

He's pissed off most of his core vote and the Tory party are likely to continue their record of 22 years without a Parliamentary majority.

The only person battling for ALL right wing people was Farage.

Cameron has fucked it up - yet again !

Worst of all is that Sturgeon is coming across as credible. We even had a Tory supporter this morning saying that he wishes she could be our PM !

Electro-Kevin said...
This comment has been removed by the author.
11:53 pm

"I'm a claustrophobe, not a xenophobe."

"Sturgeon is coming across as credible."

The reason she is coming across as credible is she is.

The country is not full. Scotland has 1/3 the land mass and 10% of the population. England - or do you mean the South East? - may be full but the rest isn't and is open for incomers.

This is where we need to break the dictatorship of the majority - if it is a majority and not just large special interest groups.

Farage's explanation of the incident and why he 'didn't even try to win over the room.'


Most of the Scottish land mass is uninhabitable.

In any case. If there are to be unprecedented population changes then all Ukip asks is that the people are given a referendum to decide whether or not this is what they really want.

Sturgeon is coming over as credible because no-one is challenging her ideas with the same contemptuous tone as Farage is getting from BBC interviewers - nor in front of biased BBC audiences.

Only one politician is speaking out for conservative minded people.

Because the Tories don't deserve to win.

This link should work.