UK trade with the rest of the world. 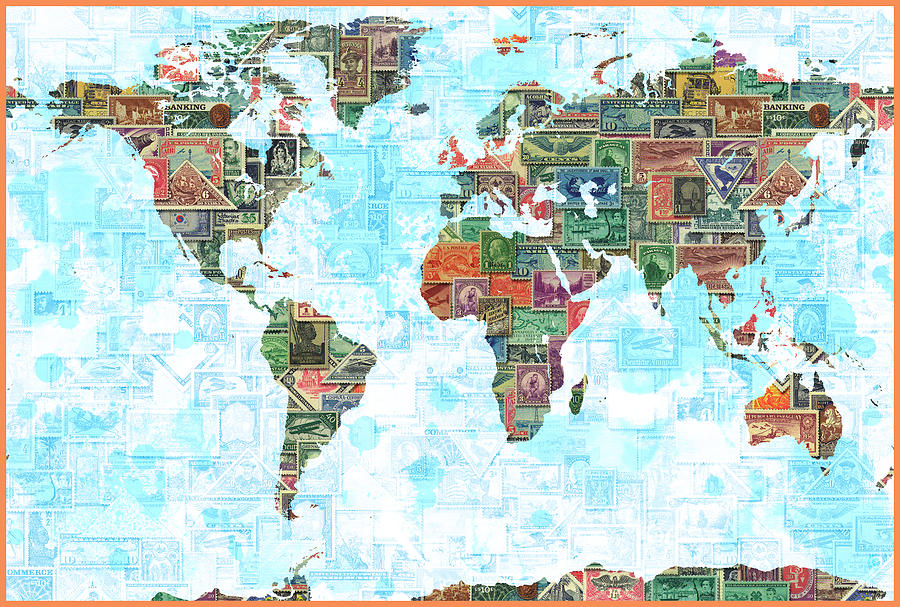 I was looking at an old brochure on mailings. BQi sends out many parcels each day and have a software package to help with that. UK is always top destination.

On the international screen the 14 most frequently chosen destinations have individual apps for speed of use. This is a generic screen for all users and not just for BQi. So looking at the page image in the old brochure can see the countries popular for mail order and general postage in 2002.

So what has changed ?

Top destinations that feature on the old and new screen. These are the Big 8 that have been considered our main traders for at least the last 15 years.

Dropping off the tailgate of UK favourite, no longer making the frequent flyer list.

The channel isle' have split into  Jersey and Guernsey. Presumably due to greater trade. This might have been due to the VAT loophole exploited under the New Labour years that allowed a special EU low value import item tax relief being applied to the islands and making them one of the largest suppliers of CDs and DVDs on the planet.

A study by the Kantar Group found that in 2009 there was an 18% increase in the volume of online CD sales. Many or most of these were shipped from the Channel Islands, although they are almost always controlled by UK-registered parent companies.

So - 4 new EU countries take the place of  3 former colonies and Japan, who's powerhouse status has declined considerably.

If memory serves until about 2009 Commonwealth countries received a mailing discount through Royal Mail. This has ceased. Meaning all non Europe mail is the same price.

No idea how this data is compiled. But as its user defined it has some use.
We know exactly why Poland has suddenly appeared as a destination. 750,000 Poles now live in the UK. Up from below 170,000 in the 1960s.

Belgium disappearing might be simply language. Dutch speak English well. UK Ebay is the best in Europe. By a large margin. UK regular mailers can pay to have their items featured on Euro-Ebay pages.The Dutch might just be better able to shop online on UK websites.
There are no customs charges for inter-EU trade . Belgium with their French-Dutch just might be less able to translate the web sites and make more use of German-French sites.

Italy was considered a no go area for mailing until very recently. As expected if you post to Germany it will arrive efficiently within whatever the timescale that was chosen. Post to Italy and you might have a 50% chance of item ever arriving at all. Italy's postal delivery service was such a basket case that the EU had to specifically introduce legislation that no member state could refuse to post to any other member state. Improvements have occurred and Italy, though still a nightmare for sticking items into customs for months on end, seems to have become a UK destination. There are only around 120,000 Italians in the UK.


India + Pakistan - South Africa all dropping out of the featured destination? Why would that be?
SA seems obvious. The flight of UK settlers back home after the end of Apartheid. And lower incomes all round. South Africa shows UK as its top migration destination. But it has fallen along way down the UK's favourite emigration list. Australia and New Zealand, USA and Canada are more popular non European destinations. The awful crime rates must play a part in that.

India and Pakistan ? What happened to them?
Still over a million of each community in the UK. China would be my guess. Buying in direct from China.
So why is China not on the list? Our chief importer nation and we export them the grand total of nothing very much ? Language and import restrictions. Low world rated worker incomes and closed borders is the answer.
And Chinese making up only 350,000 of UK population.

EU nations gaining over non-EU?
Some ammo for the 'In' team?

Not much direct buying from China - at least at consumer level Bill?
I would thought UK people would buy usually from Hong Kong? Although with the rise of Shenzhen across the border that may not be such a big thing. Still low levels of trade.

I'd expect more intra EU trade as soon as tariff barroers go up elsewhere. ARe you sure it's only 95k Spaniards in teh UK - it seems half of them work in my office ...

Seems so. But its a huge increase. More will come.

Buying in isn't featured. This is only for mailing out to other nations.
But there has been a very large increase in UK consumers buying direct from China. DHGate is wholesale Chinese based website where you can buy loads of junk and sell it here. We use it. Its very hit and miss and we no longer buy electronics through it. But for clothing and bags and plastic toys its fine.
They also sell on UK ebay. direct to the consumer.

* check the shipping times when buying on ebay. Some items from China are 4-6 weeks.

There's no customs charges on inter-EU trade at all. The £135 is the threshold for duty on goods coming in from outside the EU and it's waived if the total owed is under £9 on a line item which means even in business quantities you often pay no duty. Sometimes we've imported five figure sums and not had to pay any duty, only VAT (I've questioned when that has happened but DHL, UPS, etc insist they've calculated it right).

Jersey and Guernsey have most likely been split out due to ISO3166 adding them as a separate country codes in 2006 which makes a lot of database keeping much easier. They also have to be handled as special cases (along with Monaco) because they are in postal union with an EU member but not actually in the EU themselves so VAT becomes a bit more complicated.

Italy and Spain are still as bad as ever. Fun thing to do with Italy is send a package with tracking and watch how it sits in a mail centre for three weeks without moving.

I've known Scandinavians and Benelux customers that buy more from UK versions of sites than their own regions. Plus a lot of US companies will only list on Amazon.co.uk but offer shipping to the whole EU. You usually have to offer information in local languages so using the UK as a beachhead into the single is a popular choice.

K- I have written that wrong - Eu trade customs.
Booze and fags is still subject though, according to the Border Force website.


The £135 is for imports into the EU from outside asyou suggested, on all items whether Vatable or not. Even your xmas pressies from the in-laws in Kookabura beach are supposed to attract vat.

Amazon Uk has lots of items that can't be bought in Ireland. The Irish buy them giving a UK relative address and they post them on. That's very common. Seems to be electrical leads and apple products, though don't know why.

I'm a bit out of touch with the ebay world now, but we used to sell a lot on there. Have to agree Italy was a no-no simply lost too much stock/money. Greece was OK if a little haphazard about where / who they left it/with sometimes if the buyer wasn't in. France, Germany, Scandinavia etc all fine. Even some of the Baltics seemed fine.

When ebay and paypal took up the "it's always the evil seller's fault" mantra. We eventually gave up. What with the condescending emails followed by "we've automatically deducted this from your paypal balance even tho' it was ordered Christmas eve and didn't arrive within two days and the buyer doesn't seem to know what bank holidays are" (actually happened), it gets on your tits in the end.

Simultaneously we did buy stuff direct from China on ebay too (always having it sent to my home address) and sold it on - I should probably be still doing it. But there are suppliers in the UK that for a few percentage points will save you the hassle if it doesn't arrive and the wait.

ebay used to be full of scam sellers, now it's the buyers. They are all perfectly cognizant of ebay's & paypal's buyer friendly policies.

In the past tho' (late 1980s) I used to export to Germany, France and Portugal and as a very small business didn't really encounter any barriers or difficulty in getting paid or actually performing the exporting itself... a vote for OUT or NO!! given the proposed question format!!

I've seen a lot of Indians, Russians, etc using UK based mail forwarding services so maybe that's where a lot of them disappeared to?

We ragequit Amazon for a couple months last year after getting absolutely fed up with their customer support. The annoying thing is not the customers but the outsourced Indian support that barely understands English. Went back on and they seem better now plus they made it harder for customers to open cases.

We've been told by Royal Mail that their Mailmark QR code thing is being expanded to 24/48 for free from October. So that should eliminate false "item not received" claims. For any "not as described" claims you can just call their bluff and tell them to return the items.

According to the Pink Book (2014 ONS), for goods and services, exports to the EU were 50% of all exports, but imports from the EU were 60% of all imports. So the UK is in deficit to the EU, primarily with Germany, as usual.

UK exports to the EU over many years have remained fairly steady at about 50%, despite the fact that nations which the UK used to count as "rest of the world" have become added to the EU. So the EU is of significant, though declining, importance to the UK.

Export figures are also compromised by the "Rotterdam" effect where goods destined for the rest of the world are counted as EU exports. So actual exports to the EU are likely to be less than 50%.

So it does not seem to me, from the full figures, that there is any "ammo for the 'In' team". Then the special circumstances that you describe above, BQ, are seen in a new light: 'industrial' or 'normal' trade must be declining even faster because selling to Brits in Spain etc has increased.

And of course, most countries trade with European nations without being members of the EU.

And British trade with Ireland is trade with the EU.
But it isn't really. Its our usual, century old cross border trade now branded under the EU flag.

It's much cheaper to get small items direct from China through ebay than from a UK seller or a UK shop. I received an excellent Chinese fountain pen today (99p, including postage from somewhere unpronounceable, 13 day delivery). Chinese suppliers on ebay are now my first port of call for small drill bits, screws, electric motors, etc.

DJK -We sell those very same fountain pens. £1.29 I think on ebay. We get them from the Chinese.
And BQi only stopped selling drill bits when the Chinese jumped in.
They sell their bits cheaper than we can buy bankrupt stock.
From around 2009, even when we had branded drill bits, at 50% off B+Q prices, we could no longer sell enough to warrant buying them up. So stopped doing hardware and electric drills and gardening equipment altogether in 2010. Even though that's what BQi originally was.