Why Euopeans love the EU.

I was in Cyprus recently.  Haven't been for about 25 years.
Place looked good. Usual sun and sand and sea. Mountains and breezes and lemons. 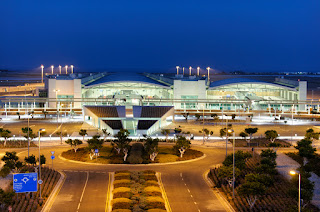 The airport was new.  Ultra new.
Not the shed I remember. Wiki says a €650 million upgrade has been completed. A French led consortium with Greek, Cypriot and Irish investors did the job. the EU operates a marketing scheme for new airports, which this appears to be allowed to be, and so an 18m euro marketing fund  can be tapped into, too.

The road from the airport was all smooth and new. As were the roads in general. Not the Greek style, potholed, crumbling, dusty, surfaces I remember. The roads were good and the road signs were new. Better than in the UK, in some places.

Digging into the EU papers reveals


The cost of the design and construction of the primary road network (including
motorways) is covered by the Cypriot government with help of the Cohesion Fund: for the period 2004-2006, € 55 million has been allocated by the Cohesion Fund for infrastructure projects in the Transportation and Environment The Cohesion-Fund will finance € 25 million Euro (62% of the total amount of €41 million).
So that helps explain the new looking bus shelters. The parking bays. The waste bins and the plentiful and frequent buses and fewer wrecks littering the roadside. Cyprus had one of the worst road safety records in Europe. So something needed doing.
If you are a nation like Cyprus, then what could possibly be bad about the EU? These big private-public projects are able to be financed because of the EU. How else can a small nation, dependent on tourism and service industry fund a complete overhaul of its road and air infrastructure? Money flows from the wealthy nations and down to the smaller ones. That money makes life in Cyprus a whole lot better. As it did in Greece. And Ireland. {Ireland and Greece were the two poorest European countries pre the EU.}
And as it will in Romania and Poland and Bulgaria and so on.

As one of those rich nations, who only seems to get more regulation, new laws and a large bill from the EU, the UK can and does often wonder, why are we in this club?
For Cyprus the answers are everywhere you look. Even the raggedy, build as you earn, permanently half completed structures that usually litter the Mediterranean were mostly finished. And this is after the economic crash that damaged the island, and the loss of tourism to Turkey and Egypt because of the devalued pound circa 2008.
Cyprus looked like a much better place than it did before EU membership.
For the UK a reason for this premierclub membership is less obvious. Unless you look at it as the Europeans look at it. Which is ..as a Federal Europe.
Cyprus is just the Rhode Island of the EU. Germany is California. And if California is twenty times wealthier than Rhode island, and some of that Golden State cash flows to the Ocean State to make the entire union a better place, Californians don't much care. In the way that it doesn't really bother non commuters that they fund the rail service. Or that a good percentage of the taxes paid by someone in Guildford are mostly spent in Bradford. Because Guildford is already nice. And Bradford is horrible.
Once the idea of a Federal Republic of Europe is considered, then it all starts to make a lot more sense. Free movement of people. Because if the work dries up in Fresno you might need to 'U-Haul' your ass to Providence for work.
One currency, and one federal bank, because otherwise its never going to be a federal republic. A Federal Government with tax and spend responsibilities for all; with individual states having some discretionary tax and spend of their own. A federal police and army, with local police and militia on a state level.
Once you start to imagine the EU as the United States, the project suddenly seems imaginable..Even possible. Even ..quite similar to Europe.
The ten poorest states in the USA are all in the south.. Migration comes across the southern border, which needs constant patrols, whilst the Northern border is unguarded. Taxes and regulation drive people to murder. Pork Barrel politics is not just practiced, but essential for carving out the largest slice of the national pie for your own state. All we need is some election mechanism whereby the federal government in Brussels can get its two house self into such a partisan lockup that the government has to shut down, and the United States of Europe will be born.

When the referendum comes, it should be made clear. A vote for In is a vote to be a member of this republic.
A vote for out is to be a Canada alongside the USA of Europe.

Either way, a Republic of Europe is coming.
Posted by Bill Quango MP

Also - there is no European demos. Which means there can be no real democracy.

I'm working in Canada alongside some refugees from across the border who don't want to move back.

Some of the transfer spending, as with some foreign aid, makes sense because it develops the markets for the rich countries' stuff.

Lisbon has a wonderful newish metro and Portgual has lovely roads thanks to EU structural funds. The EU's spending as a total of EU GDP is tiny, especially when compared with what the US federal government spends, for example.

If London did to the rest of the UK what Germany does to the rest of the Eurozone, ie pays virtually no subsidies whatsoever to poor countries, then London could stop raising income tax on its residents. That shows the scale of the transfers needed to keep a currency union going.

Is it news that courtesans may thrive?

"A vote for In is a vote to be a member of this republic. A vote for out is to be a Canada alongside the USA of Europe."

I think most people know this and are happy to be part of a wider community rather than "Little Britain".

On the same basis all overseas aid should be stopped. Then all intra-Europe transfers should be stopped. And then there is the Barnett formula which does basically the same within the UK. And why stop there. Just disinherit the kids and cut off the wife/partner too while you are at it.