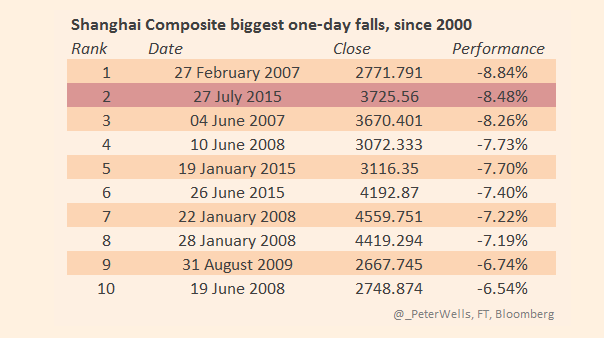 So, all that printed money in China is not having much of an effect after all. Always hard in the middle of the summer to know what such a huge sell off in China stocks really means of course - everything could be fine when everyone comes back from the beach.

- It could mean that the entry of lots of retail investors into the Chinese market has resulted in the traditional moves by real players - i.e. to rob them blind and then double up just to be sure. The market had got very frothy and now perhaps was a good time for major traders to drink in some fabulous profits.

- The collapse in commodity prices suggests something else, that China really is slowing down a bit in its historic growth trend. This maybe bad for not-yet-rich Chinese but maybe better news for anyone who does not make a living selling commodities or luxury goods to China.

- The Government of China tried very hard to buck the market and seems to have failed, a dragon they perhaps cannot control. This in itself augurs well for the future in China, as since the Tianamen square massacre have been in the thrall of the Communist party and army.

Looks bumpy from afar though and as well all know, stock market crashes come and go, but their real world impacts are often very large - I sort of recall we noticed 2008 in the UK for instance.
Posted by CityUnslicker

now we may find which is the more resilient system: ideo-state-directed eastern capitalism (with no political pressure-valves), or the good old non-ideo flexi-westi variety !

I thought retail access to the Chinese stock market resembled those roulette terminals you get down the casino?

Have you ever seen Chinese people gambling?

8%? 8 is a very lucky number, if 8 comes it they stack it to the ceiling. They were all long, and now they are all short, simple as.

Having come home and checked the charts, it looks like a pretty standard fibonacci retracement to me.

What sort of p/e multiples these companies trade on, or what dividends they pay, is a mystery to me. Anyone know

Shanghai rose 150% in the last year, so is a correction such a big deal?

Anon - no, the big deal is the rapid slowdown of the Chinese exeptional growth phase.