There was some resistance when I attempted to persuade readers to embrace non-EU immigration and solve the current African migrant crisis. I realise that solving long term population shifts was probably a tad ambitious.
So this week, in the Quango Lectures, I shall attempt to try and solve something far simpler. 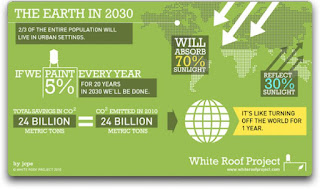 On this global warming site - www.underground {not affiliated to the tube drivers union} there is deep concern over the melting of the polar ice caps.


Impacts of Disappearing Sea Ice
Arctic sea ice is an important component of the global climate system. The polar ice caps help to regulate global temperature by reflecting sunlight back into space. White snow and ice at the poles reflects sunlight, but dark ocean absorbs it. Replacing bright sea ice with dark ocean is a recipe for more and faster global warming.

The Problem
- Melting ice in the arctic reduces the white reflective area that returns sunlight to space.
About 4.5 million kilometers is the area that is reported to have been lost between max and min ice shelf extent.

The Requirements
- There are some 100 million homes in Northern Europe and the Northern USA. The average house size in the US is 200 sqm. Canada 180sqm and UK 75 sqm. The UK has the smallest house sizes in EU so that gives us a good median EU/North American Home size of around 150sqm/home.
That gives us around 15000 sq km of roof area. Much more than we really need.

The Solution
- Introduce legislation to have all roof area in Northern Europe/North America painted white.
This permanent white will reflect the sunlight lost in the arctic and Greenland regions from melting ice and so prevent accelerated global warming caused by ice loss. It may even prevent the ice loss in the first place.

* The cost of initially painting or white covering all the roofs can be met by a temporary reduction in local domestic and business taxation. Council tax payment in the UK, for example, could be offset by by having the work completed. Or governments could use some of the money earmarked for Green energy subsidy instead. Either way the 100 million roofing works will generate significant VAT and sales tax receipts and a completion date of 2030 would ensure
Industry and employment will benefit from the initial works that need to be carried out. And the the design, manufacture and continuing research of reflective white, self-cleaning, slate and tiling for use in construction.

I hate to break it to you but most of those homes will be flats or have more than one story, so your estimate of the available roof area might be a touch on the high side.

Cracking idea, though. If you could only persuade that nice Mr Putin, you might be on to something.

A proposition worthy of endorsement by Geoffrey Pyke.

This idea is perfectly feasible and can be implemented in the next few days.

Lord Murphy (it's only a matter of time) advises us that bank loans create money out of thin air.

You should contact King Richard and arrange for the Lloyds Bank Warsaw branch to arrange €100,000 loans to 1 million Poles and instruct them each to paint 10 roofs white.

Mission should be accomplished by Monday afternoon (they work weekends).

global polar ice levels are at their peak for 50 years...its just all at the south pole currently.

On balance though, this is a pretty sound idea, no harm in white roofs and with all thee pigeons in London their is an eco friendly way to achieve it...

It isn't as barking mad as you might think!!

We would probably need to paint more than the 2% or whatever it is of the UK which is roofs though. I am sure that streetscapes would look better in pure white. Genetic engineering could produce white grass for lawns and open space.

Maybe we could persuade our cousins in the sunnier less cloudy less nations to put down white sheets over the sand.

Australia has plenty of aluminium ore, they could make lots of foil and cover everything in the out-back.

mention of even the most logical (and benign and easily reversed) climate engineering (or sometimes 'geo-engineering') gets the most amazingly explosive hostile reactions from greenies, there are two I like particularly

2) "if a complex engineering scheme was to be put in place and everyone keeps emitting CO2, and then some catastrophe happens and the engineering can't be done any more but CO2 carries on being emitted, then things would be even worse than before" (yes, straight up, that's not an invention of my own) - that is so stupid I can't be arsed to keep typing

I read an assertion the other day that taking CO2 out of the atmosphere wouldn't be as effective as not putting there in the first place. I suppose there is good carbon-fixing and bad carbon-fixing.

Good idea. But leave one street of local vernacular houses in each town with original roofs 'just because'.