In Which Your Hero is Gassed by the CRS

So there are Mr & Mrs Drew going about their lawful holiday in Paris, returning by train from a pleasant day in St-Germain-en-Laye.  Bimbling through the labyrinth that is the Nation RER/Metro station (think Oxford Circus or Bank multiplied by five) we noticed a few folks with scarfs over their faces ... well, it was quite chilly, and anyhow the denizens of the RER include some dubious types from the banlieu as anyone will tell you ... we mounted an escalator to propel us into the daylight at our chosen exit. 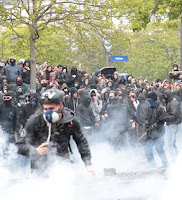 Bam - straight into a cloud of CS with its characteristic smell, and effect on the eyes and throat.  I haven't had the pleasure for a couple of decades at least, when I last had my annual NBC test as a soldier.  (As I said, it was a cold day so at least the CS wasn't going to make its way to, ahem, sweaty parts, where it also has an effect ...).  Plus the usual helicopter, and the popping of some kind of percussion device being used by one side or another.

Yes, friends, this is one of a series of riots against M.Hollande's plans for a bit of labour law reform.  In the red corner, a mob known as Nuit Debout, who on this occasion were 'standing up' during the daytime.  Nuit Debout are probably what Momentum would like to be when they grow a pair - so we may see some copycat action in due course.  I wouldn't ordinarily cite Russia Today as any kind of reliable authority on anything, but here's their account.

Anyhow, call me a coward I really don't care, but my instincts are with the uniforms in cases like this, so we turned in this direction.

Yes, in the blue corner were the CRS.  Best not tangled with, as the good Anna Raccoon recently observed.  They took pity on the middle-aged couple stumbling and spluttering off the top of the escalator (why no announcement down the Metro?? - I really don't think this would happen in London, they'd close the station) - and let us through.  They'd come for a bit of skull-cracking and it was the youthful lefties they were after - them and their last-ditch defence of the 35-hour week. 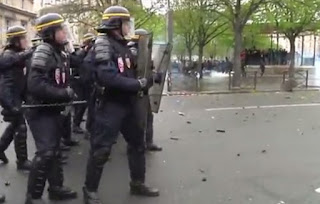 So for us it was back to the hotel and plenty of talcum powder.  I know the drill.  We took a circuitous route out to our evening engagement ...  I wonder whether Hollande will get his labour reforms?

I hope you and Mrs Drew are well and enjoyed things otherwise.

When you said you were taking her to see Les Miserables in Paris I bet she didn't think it was the street version !

(The last time I was in a riot I thoroughly enjoyed it. I was a stand in during the matinee !)

I got chased by the CRS when I was about 16 and a friend threw litter into the Palace of deputies. Had to hide under a Seine bridge. Thought it was funny.

Few days later came across a body in the street with some CRS guys around him. They'd shot a robber off his motorcycle and killed him.

Glad you are ok.
Springtime in Paris - Its very lovely. And always the same. The leaves and the strikers come out.

I nearly put a Eurostar through the stops at Gare du Nord. The 'crocodilles' (sensors) on approach demand coasting at below 10mph. Very difficult with an air braked train.

I've had nightmares about Paris ever since.

The CRS aren't hard - they are just backed up by the state and limitless on what they can do.

The "Smack!" of firm government? Anna Raccoon appears to approve. Still, why should I quibble, I'm not allowed to wear a protest T-shirt near Downing Street in case the PM's head explodes. Gone are the days when the British people could explain how they felt by putting the windows through in Whitehall.

Enjoy your visits to Paris while you can, the border snaps shut at 10.01pm on the 23rd of June!

On the topic of CS, in my experience sweaty parts are fine unless you make them un-fine by washing them with non-sweaty parts which have been exposed. Cough.

...which reminds me that the only times I experienced CS in the wild were blue-on-blue, and luckily I was neither party... never give more than about 1% of British cops guns, let's leave it at that.

A few weeks ago I was keenly trying to brush up my French by watching a news round-up show online... and the main story was a nationwide series of riots by taxi drivers, who were being asked to make some changes which to me sounded trivial. I forget the details. Later on I read a report by a British journalist who had tried to hire a taxi at a Paris airport, the journalist was shouted at and then his Uber driver was physically assaulted by members of the taxi union.

The French are a bit odd, aren't they?

We were all travelling to France easily enough pre Maastricht. Package tours to the Del Sols were going on long before then too.

You are seriously deluded, Blue.

Seriously inexperienced and seriously out of pocket. You have been duped and shafted.

This was a golden Isle and I saw it and enjoyed it - though I didn't realise it at the time. Please don't shoot the messenger.

Someone needs a cup of tea and a sit-down ;-)

How many sugars do you have ?

Your CS experience was in training - so of course it was blue-on-blue. I doubt it was in 'the wild' but more in the context of training. The only petrol I've experienced is blue-on-blue in that case.

Since when have rioters and terrorists had the restraint to use CS anyway ? If only they would. :(

You know. You and your pardy (if you have one) is always welcome chez Electro.

Wifey and I will be sans kids as of september and will have plenty of room and will be at a loss as to who to look after (excepting dawgie.) So - hospitality, scenery, great pubs and some larfs await. Just email. You and any of the CU team.

(Our meeting at the Hole in the Wall pub was a lifetime high point for me.)

50/50 solution of Maalox (Aluminium Hydroxide & Magnesium Hydroxide)and water in a little plant spray bottle; when gassed, spray eyes and into mouth and swallow.

Maalox - fighting CS gas in France since 1949. Available from all good pharmacies.

I did actually carry a CS gas remedy for about a fortnight in 1998 when out after getting gassed by accident on the way to the Colony Room - some girl aimed her CS rape spray at some bloke but missed and I caught it when walking briskly past ...

Last time I went to Paris there was an actual bomb which went off in the metro station we had just been through. We didn't know until we saw it on the telly back in the hotel. That was a very close shave and made me go hot and cold when I thought about it.

I was in Paris when Diana died. Didn't know about it until I got back to London, but I maintain that I knew that "something" was up: there was an atmosphere in Paris that Sunday morning.