Inflation Horror, and Other Shocks to the System 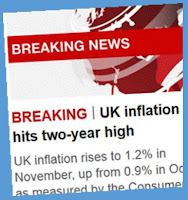 In other news:
Discuss.

If the bottoms fallen out of the Labour Party, is there anything left?

Bollocks ! Just as I'd put my money into high end London mansions. :(

I have to say if those 74 questions to the US Dept of Energy are a reflection of the next 4 years of a Trump presidency, then this could get very interesting!

My feelings exactly, anon. The skeptic camp is not as dumb as the greens believe ... another dose of heavy-duty cognitive dissonance coming down the pike there

Where is the bad news?

When did this site go all happy-clappy?

Surely you must have broken some sort of law?

It's a cost of living CRISIS.

Amusingly for the Remoaners the uptick to a whopping 1.2% is mainly due to last year's collapse in fuel prices having dropped out of the index. Food, expected to be soaring by Osborne and Marmitegate, is actually falling in price (and will fall significantly when we get out of the CAP of course).

People are so bloody skint that as reported elsewhere, the upmarket ranges that the supermarkets offer are flying off the shelves.

This is all terrible and I want to know who to blame.

I've done quite a few telecoms due diligence projects for banks and other investors and those questions are very good. The only thing wrong, IMHO, is that many of them start "Can you ..." which invents the response "No". I always preferred to start my pre-project requests for information and data with "Please provide the following ...", that way they couldn't stall as there was no ambiguity.

Without commenting on the merits or otherwise of any dispute, that shows the enormous loss of employee power vis a vis employers over the last 40 years.

"If you don't fancy the job at that money, plenty of bright boys from Cracow who do"

The salmon is alright, but that lumpfish stuff is rank.

Laban Tall - Alluding to the Southern dispute. The days lost to strike action in this case are not those lost directly to strikers but those poor buggers who can't get to work.

It's difficult to justify. Very difficult. And as Hatfield Girl once said, politicising a workforce is despicable.

It's more complex than that though, and not about the money. I'm prepared to expand on my thoughts if the Unslickers do a post on it.

Steven L - Depends if the ballot goes against me. I shall have to eat cat food in that case.

Surely you must have broken some sort of law?

(there's an Anon out there who takes offence at the idea he wishes doom ... but it's pretty evident there are plenty who do - the only way they can square the circle of their liberal befuddlement and general alienation from reality)

Those 74 questions show some real intent and some sharp minds at work for Trump,I don't think people realise yet just how transformative Trump will be, a new Theadore rex?

EK you are such a class traitor :-D

EK and Blues, nice to see you boys playing nice, you'll be getting a room next.

Agree with Thud on this one, some penetrating questions directed at the DofE. Let them squirm a little trying to justify some of the more outré bollocks that they could get away with under the Obama administration.

It seems pretty clear from the appointments that he has made that Trump intends to do more than tread water with the Presidency.
It's almost like....he wants to Make America Great Again!

The situation in America very closely parallels events in Britain. Both with increasingly extreme far left/statist politicians, absolutely desperate to get into power, but with obviously no idea what to do with it when they get there. (other than entrenching themselves into the establishment)


Leftist pols have (in a democratic country) think the state is the answer to every question. The trouble is that that costs and as the state gets larger, each incremental step costs more for less return, and the steps that have been taken get increasingly expensive.

Obama took some steps forward towards an NHS.

Hillary actually did have plans, but like the smart girl who always does her homework, no-one was interested.

Confusingly the notionally right leaning trump seems to be about to spend lots on infrastructure.

Well this video explains why high taxes are good for the economy......

1.2% - i'm stocking up on beans before it goes all Zimbabwe on my ass!

Anonymous said...
Well this video explains why high taxes are good for the economy...... 9:24 am

Crikey. I thought at first it was Jeremy Corbyn doing stand-up.