Will Brexit Kill off the House of Lords? 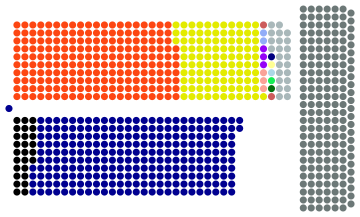 As a Republican, as ever an unpopular position, I was musing that the paradigm shift which Brexit has cause may find new victims this week.
The House of Lords has long been an anachronism in the UK system. There has of course been some attempt to reform it with Tony Blair getting rid of the hereditary Lords.

Hilariously, this reform has probably made the Lords even worse than it was. The hereditary's were at least independent, whereas their replacements have been retiring and failed politicians. The Liberal Democrats, long-since abandoned by the voting public, happily have 109 of our 807 Lords positions.

Today they are going to try to amend the Brexit bill which was handily passed by Parliament, they may have more success and be more blinded than is the common thinking. Remainers are nothing if not strident and the Lords is full of Remainers who owe nothing to the public and who face no prospect of election or losing their remuneration or position, thanks to the unwieldy constitutional convention that we have inherited.

Lords reform will be fully on the agenda for the Tories and UKIP together if there is too much resistance. At a push I can see the SNP and Plaid Cymru also spying a chance to make mischief with the constitutional set-up.

In reality, this will all take time as if there is not enough for the Government to do with Brexit over the next few years. However, planting the seed if the first step to growing a new garden.

Remember a good proportion of the Lords draw EU pensions. One of the conditions I undertsnd is that they cannot take action which is detrimental to the EU.

This is of course a massive conflict of interest and would be viewed by some as on the verge of treasonable.

Some suggest step one is to threaten the ending of the £300 allowance.

A first warning shot after Brexit knock back one might be to suggest that is payable only after 4 hours in the actual chamber. Rather than as is the current case, a lord simply signing in their self. Or being signed in by a friend. Or a chauffeur. Or even by a taxi or courier driver.

Shot two would be to properly define a role for the members of the hol. And specify that code of conducts apply and failure to adhere starts the expulsion process. That outside interests must be taken into account for all members and those with eu pensions, or directorships of eu companies, as an example, prevented from voting on such matters as Brexit.

Shot three would be to hint that the pm will create the additional peers to form a majority. All brexiteers. And as part two of their remit, a vote to reform or abolish the hol as necessary.

Should concentrate a few minds.

Enough to get Brexit through, anyway.

Team Brexit managed the Commons pretty well, they seem to have their act together (at last)

then again, they are only up against Corbyn: this is quite enjoyable in the Graun

This feels a bit like Monty Python & The Holy Grail when the Black Knight has all his limbs cut off & says: "Alright, we'll call it a draw"

This'll be Theresa May's real test. I suspect this is where Brexit could falter.

I calculated (from yesterday's vote) that the people opposed to Brexit, with enough conviction to defy the referendum result, number a mere 8% of the population.

This is a projection of the number of Remain MPs who voted for Art 50, pro rata over the whole voting population.

It's no good Remainers saying "50% of voters are opposed to Brexit and are being ignored" because they aren't. Most of them see that subverting a democratic result is a greater evil than leaving the EU. 50% of voters *disagreeing* with Brexit is another matter, however.

I doubt the Lords are going to see it this way. Some of them are very arrogant.

Maybe we could just guillotine them all as a warning to future generations of autocrats?

I had a thought that as soon as the Law Lords buggered off across the square that the Lords is like a holding pen for failures. As they perform no real function anymore and have been filled with about 120 Lib Dems, it's become an ersatz council chamber.

The threat of reform rings hollow though. I think the reality of abolition, at this point in time, would genuinely be a case of pissing on your own chips. In many respects, the consequences of abolition would be a more complicated process than Brexit as this would have structural implications rather than just legal. The constitutional permeatations associated with Lords reform go back a 1,000 years rather than the trivelling oversight our parents instigated with accession to the EEC 40 years ago.

My favourite PM has always been Lloyd George and Lords reform is only ever done when the cheeky gits wake up from their alcoholic stuppour. He nearly blew the place up and backed down.

This is Blighty - if the Lords amend the bill then so be it. We've got half term so it will be a time for them to search their conscience and, failing that, May should send forth a few attack dogs with photos of their children. The vote was unequivocal - they'd be awfully cavalier to go against that.

Well the removal of the Law Lords was presumably intended to pave the way for a reform by the Blair government.

CU you are probably right, or at least I feel the same way. However I think it is unfortunate for MPs to be seen to be threatening Lords Reform as punishment for not passing the Article 50 Bill. It ought to have remained an unspoken threat IMHO. There is nothing more British than digging one's heels in in the face of a challenge.

The really tough question is what to do with the second house once you have decided that having a bunch of retirees and failures should go. I imagine one answer would be to have a small Council of The Isles to allow the non-English nations some say over Union-wide issues. Or regional reps. Or something.

"would be viewed by some as on the verge of treasonable."


They're bought and sold for Brussels gold,
Such a parcel of rogues in a nation!

Slight difference in that the Jocks needed the money after their adventures in central America...

EK my feeling is that hardcore Remoaners are few but influential. Many Remain voters accept the result and are content to move along. The Lords do not reflect any sort of opinion, and would probably argue that their job is to rein in "populist" measures...

The thought that always scuppers Lords reform. What would you get to replace it?

I've worked in politics for a long time and the Lords do awesome work checking stuff outside of the civil service. That job will either need to be replicated (but in a shitter version) or abandoned where we get total majority control by the commons.

Both options are unacceptable. Simply because Brexit is complicated does not mean that the Commons can stamp its feet and throw a tantrum when simple assassination will suffice. They're old and incompetent - just cull a few of the fuckers rather than get all HS2 about it.

I know. I must come across as a terrible pessimist. I'm sorry. I just don't trust them. Not one bit.

And who is going to pay for the Guillotine??? "FRANCE IS!" Hell yeah, we have a plan, let's get rabble rousing.

The daily mash said it better than I ever could

Here is a thought for the reform of the Lords. Ban all the broken down political hacks from the house and just have the hereditary Lords. They did a fairly descent job until Blair started stacking the chamber to give him and his cronies support.