LBC Broadcaster Iain Dale is repeating the exercise he has done before. Predicting the results of all the seats being contested in the general election. Despite his tendency to give any benefit of the doubt to the Conservatives it does still show significant losses for labour.
Its not complete yet. But enough have been done to see the pattern.
I'd suggest Mr.D adds the UKIP and Conservative 2015 votes together. Drops Labour 2015 total by 15% to 25%. And raises the Liberals by the same amount. Then checks the incumbency benefit. Name recognition and other local factors.
So far on about 1/3 of the seats calculated Labour have lost 24.
West Midlands being a particular sore spot for them.

You can see all his predictions here.

Two pieces of info from Iain Dale's seat projections so far that I find quite amusing.

1. Tooting may switch to the Tories. 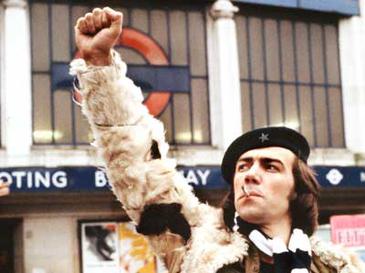 Wonderful to have a photo of hopeful Tory MP Dan Watkins outside the 'People's Underground.' Though he could entertain us with a Yeti coat, Fulham scarf and Che beret. And go to the right station. The Muppet.
Would be a great image for election day. In the spiritual home of the Corbyn Popular Front


"Power to the People"


Tooting, though amusing, and Mr Dale predicting a Tory gain, is highly unlikely.
Tories need to find 7,000 votes to pull it off. And UKIP, never successful in London seats, had just 500 votes in 2015. Plus this is deep Remoaner territory.
Leave Vote: 25.58%
Iain has gone further back to 2010. When the Liberals had some 6,000 votes instead of the 800 they got in 2015. If enough votes drift from Labour to Liberal, there may be enough Tory votes to win it. Third time lucky for the hopeful Tory. But it seems too much of a stretch unless Labour have a real, real shocker of a night.

The hero of Grunwick, however, does look vulnerable.

Email ThisBlogThis!Share to TwitterShare to FacebookShare to Pinterest
Labels: 2017 election

Yup. That is Tooting Bec Station and not Tooting Broadway Station !

I was raised in nearby Mitcham. Having said that, Woolfie Smith describes someone being dumped in the pond at Figg's Marsh. There isn't a pond !

I should have stayed. Grotty little terraces now fetch £800k. They could be picked up for peanuts twenty years ago.

Lous Gent was my sparring partner - he caused me to give up boxing. I could handle the tournaments but not the training with this lad, who was bigger than the coaches at 14. Tough as they come.

The club was called Mitcham ABC actually. It was based at StBarnabus Church in Tooting.

instead, they moved to another council home instead. And have drug dealer sub-let gang on one side. Some family on the other side, who though quiet, are always being arrested. Private houses in that street are fetching £500,000.

I wouldn't pay £50 to live in that East London shithole.
But I'm West London. And have always thought that about the east.

Put me in the 'know Tooting well' club. Old man Drew was brought up there (some of the streets are as near to back-to-backs as you get in S.England); and years later I know - and have campaigned for - the very fine Mr Watkins. But BQ is right, it would be miraculous if he won - the Khan woman that got in for Labour (to follow Sadiq [no relation] after he went for Mayor) is a GP and plays the massive local NHS card well: the town-size St George's hospital is a very major employer there.

High recent property prices might sound like a Tory-favouring gentrification effect. It's certainly very marked (there are pairs of semis that have been knocked into a single house; multiple-occupancy tips being re-converted to single; victorian terrace houses being made over to look like a tiny Grand Designs effort where you have to blink to convince yourself they aren't new-build; front gates being chucked away en masse (middle class people don't like front gates) and tiny front gardens being turned over to raised lavender beds; all the front doors going eau-de-nil - yes, it's the whole package. You're never in doubt as to whether the occupant is the long-stayer or the newcomer.

BUT they are the kind of yuppies that really all wanted to live on Clapham Common just up the road but can't afford it - and they are only 60:40 Tory at best (well, if it wasn't for the Wicked Tories they would be able to afford Clapham ...)

But enough of Dale's error on Tooting. Where he's probably correct is Tory Hold Croydon Central, from whence cometh my recent on-the-streets report (and where I shall be back on the streets shortly)

horribly marginal last time around (maj 165) but if only half the UKIP vote goes back to the Tories it's OK - and it could easily be more. Some Lab will go LibDem for sure. Barwell is v. professional at the electoral stuff [his write-up of the 2015 campaign is required reading, you'll easily find it]. The only issue is that Labour might target it above all other London targets, and pour in the resources (which they did last time). But we don't like out-of-towners coming here to tell us what to do.

BTW, this very week Barwell (a rather undistinguished Housing Minister in his day job) was made a Rt Hon ! FFS ! Tells you Central Office wants him in Parliament very badly, if not re-elected then selected quickly for Somewhere Safe ASAP thereafter

What's wrong with front gates? I'm replacing mine! (And i'm off to Google eau-de-nil, i'm sure that's made up!)

Dick, if you google that, you'll get deluged with yuppie-targetted ads from now until doomsday!

How do you know ?

I also lived in Croydon (actually Waddon) for a few years. Reeves Corner was a magnet for us kids as it featured The Swap Shop. A bazaar of WW2 artifacts. 12-year-old kids walking up the street with 12" bayonets, helmets, canvas webbing and deactivated grenades.

I think London money is coming out this way now. Comedy night could just as easily be in Camden and there are lots of Londonny hipsters around. (You can just tell.) Lots of very good quality restaurants have opened up and our own friends have sold up and moved here from Beaconsfield. Their new property is palacial with views, workshop, garage and a grand garden (from a two bed cottage with no parking.)

I even saw my first full-on burqa on the beach today - yay !

(four sitting in the same spot actually - what are the chances !)

Iain was always good value with his lists and projections, have to own that I was well treated on them but he's also Tory oriented. In GE17 though, he's probably spot on. Let's not ignore Guido either.