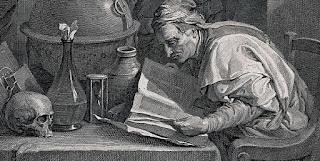 Yesterday I poked fun at the non-existent proof-reading skills of my roofer.  But it isn't only humble tradesmen that can come unstuck: it can happen to exalted professionals as well.  Harken to one of Old Drew's war-stories  - and mark well ...

Twenty-five years ago during the first 'Dash for Gas', a sellers' market prevailed for a while in natural gas.  One of the very largest oil-and-gas producers who shall remain nameless, let's call it *xx**,  interpreted this cyclical state of affairs as a licence for unbridled commercial arrogance, and had a juicy chunk of gas for sale.  They put it out to market, telling prospective buyers that the sale would be under the terms of a long-term contract they'd drafted themselves, and the only matter for negotiation was the price:  all other contractual aspects would be per the *xx** diktat.

This was not the norm: such contracts are very long and generally bespoke, and the details would ordinarily be up for genuine bilateral negotiation.  Several potential buyers read the uncompromising *xx** document and politely observed that the text wasn't beyond improvement, for the benefit of all parties.  They were shown the door.  The winning bidder accordingly sent its negotiators and lawyers simply to check the agreed price had been correctly entered in the space provided, and to conduct the usual round-table proof-reading of the 250-page document.  (Half a dozen people sit there reading one page each in turn, out loud, and it is hoped that typos and other cock-ups will thereby be nailed.)

At one point during proof-reading, progress was momentarily halted when the reader of the page in question read out the phrase "... the either Party ...".  Hoho!, everyone said - that's not English, it's a cock-up!  So they solemnly eradicated the otiose "the" and completed their monotonous task.

A few years later the inevitable happened: the sellers' market became a buyers' market and this particular gas contract became horribly out-of-the-money for the buyer - so much so, the buyer got into financial difficulties and was taken over.  The acquirer of said company set the lawyers to work on the dire contract ... and what did they find?


"Change of Control:  In the event of a change of control of a Party, either Party may terminate this Agreement."

Gotcha!  And the acquirer solemnly served a termination notice.

Of course, *xx** rushed to the courts claiming Manifest Error: obviously it should have read "the other Party".  Well, usually it would.  But, consistent with the glories of the Common Law, since both buyer and seller were big companies well able to look after themselves, the words of the contract said what they said and the court rightly threw out their case.

And indeed, that was that: with one bound, the acquirer was free of the burdensome deal.  Back at *xx** - a firm well-known for control-freakery - the very senior head of the gas division was rather publicly moved to post that (how shall we put it?) didn't represent a promotion.

There but for the Grace of God ..?  Hard to suppress a chuckle, though, in the circumstances.  Read the bloody small print!  Carefully!!

David Cameron was the master of TALKING in small print ! As I used to say of him often on these pages - with this slippery bugger you have to listen out for the small print.

Well to put it in perspective 28 countries are being attacked (300 murders out of billions of population) but making out it's one country under attack makes the whole thing sound a lot worse than it actually is.

The BBC treads a fine and skillful line between avoiding the demonisation of Islam and heightening our fears to the max.

More leftism must be required, obviously.

You just have to assume that the BBC are peddling half-truths all the time these days, Elecs.

Being an amiable sort of old sod, I just don't listen to the news any more, and get a few headlines from the online rags (not the grauniad or the independent), and leave it at that.

(You the Flower Power generation me the Skinhead.)

Sorry to hear about Anna Raccoon.

Agree with Scrobs. It is very easy, if you choose to do so, to ignore all the shouting. All media outlets are there to sell you their product. Even the BBC. It is perfectly possible to glean actual information while ignoring or laughing at the outrage.

Back on topic. Great story ND. Entirely plausible in my humble experience. I was once involved in a case where the two parties had agreed to settle their differences in the early 1980s. They had been to the Supreme Court to determine what that settlement had actually meant but the dispute was still rumbling on when I left for sunnier climes. The agreement was a handful of pages long and didn't seem to have any typos.

Some of black Swan was a bit odd but his (taleb's) advice about watching portfolio values too often (don't - ideally once a year) has worked for me and I apply it to news and email at work.
The only exception being this fine place obviously.

@ ND - I can't believe you had 6 people proof reading as per Sunday School. I guess it's inevitable as you can hardly ask 6 people to go off and make corrections. Well - i'm sure we all do but there has to be an editor at some point. That's weirdly eccentric - love it!

Anna Raccoon was ace Kev - forensic lawyer and bastion of 'fuck you' politics. As a Skinhead, she was right up your street. In fact, she did Carnaby Street way gone when. Top blogger!

Yes, we shall surely and sorely miss Ms Raccoon. (I feared she'd gone last year - and we all lamented then - but it turned out she had several more months of purposeful campaigning to conduct, and pithy commentary to give

(- not to mention standing for Parliament!)

Does anyone know of a decent online obit? I've only found passing references (no disrespectful pun intended ...)

My thoughts too Nick - I've been looking but can't find. A Memorial service in a month or two, perhaps in the lawyer's church, would attract a packed crowd - but then again parhaps St Bride's rather than the Temple ..

There's a good appreciation here at http://parzivalshorse.blogspot.co.uk/2016/11/salute-anna-raccoon.html from last November

"Anna had a passion for the defence of the weak and for upholding liberty. In that regard she was in particular a hawkish observer and critic of the murky workings of the Court of Protection."

The agreement for RBS to buy ABN Amro was done over the weekend and through the night by a whole bunch of junior lawyers at A&O in 2007.

Barclays has been front-runner so they were all new to the transaction, on the sell side they had been keen to get rid of the business as quick as possible as they knew the thing was made entirely of gunpowder.

I think RBS lost every case they ever tried to bring about the business they bought, so quick were they to sign on the dotted line and brag - a mere 2 weeks before the financial crash too!