Some years ago when I made a brief foray into the software business, a big overseas client ordered our top-of-the-range enterprise software suite.  I had a strategy / troubleshooting role and one day the CEO said; Drew, we have one of those 'strategic' situations you enjoy so much.

The idiot sales manager (whom he promptly fired), ecstatic with having landed a mega-deal, had omitted to send over our standard terms & conditions.  The client, however, had thoughtfully appended their own standard terms to the order and, our having allowed a month to lapse and already having started the implementation, they pointed out to us that under their Civil Code, we were bound by that contract.  I knew enough of the relevant law to be sure this was indeed the case. 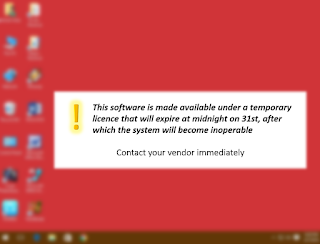 Of course, their terms didn't at all suit our requirements (not least for revenue recognition).   We had only one immediate source of leverage - otherwise they wouldn't have bothered to talk to us at all - viz that their contract didn't suit them ideally, either.  It was manifestly a cut-and-paste turbine purchase agreement, with 'the turbine' tippexed out and 'the software' typed in its place.  It talked about the need for fireproof clothing for workers operating in the vicinity of the fuelling system etc etc; and the testing regime too was a complete nonsense in context.

Hence, we were summonsed to the negotiating table; but the overall weakness of our position was made very clear.

So, as we were leaving, I took our onsite team to one side and told them quietly to install a dongle.  A week or so later when the clients' staff booted up in the morning, a message appeared on their screens:  This software is made available under a temporary licence that will expire at midnight on 31st, after which the system will become inoperable.

At our next negotiating session (some time before 31st) this matter was raised by the other side, as casually as they could contrive - and they weren't very good actors, the puddles of pee were there on the floor for all to see.  Oh, I said, don't worry about that - I'll have the lads put a one-month extension on it.

And I never mentioned it again.  Didn't need to, really.  We got a fairly satisfactory deal, eventually.

Now, about that Brexit thing.  How about the next time the Irish gas and electricity grid operators import a big, vital slug of UK energy, something pops up on their screens ...

Just curious. What exactly would the UK gain by setting out to annoy the Republic of Ireland? Presumably the Irish could simply tell us where to stick it and import their energy from elsewhere if they chose to.

but not so easy to get electricity from anywhere else, nor to build an LNG terminal overnight

Isn't there an interconnector with France with their always-on nuclear fleet. And in total it's only 4GW (two way). Hardly worth pissing around about.

Now why not get the boys at Barclay to fix the currency trades instead. Much more profitable

is the impact of REACH on our chemicals industry(private eye)

as isn't this what we are supposed to be doing post brexit?

I see Richard North’s hysterical scaremongering over REACH has spread far & wide. Leaving aside the fact that REACH is an overly burdensome chemophobic green nightmare... it really is not a problem to sell chemicals from outside the EU into it. In the world of specialty chemicals, if you need it, you need it, where so ever it comes from. To give but one concrete example.. my company uses a particular niche acrylic resin made in Japan. No one else makes it & the Japanese couldn’t be bothered to engage with the regulatory regime, so we registered it ourselves along with 3 competitors, sharing the cost. Job done.

Frankly much of the industry would be happier if REACH didn’t exist. I am perturbed to hear HMG wishes to perpetuate it in another form.

In the meantime it would be helpful if North would just STFU. Like a good public health inspector he sees only rules & doesn’t seem to get that politics comes first, rules second - and the EU ignores the rules whenever it feels like it.

What exactly would the UK gain by setting out to annoy the Republic of Ireland? Presumably the Irish could simply tell us where to stick it and import their energy from elsewhere if they chose to.
=============

So go to Ireland and say we're going to impose 500%, no 1000% tariffs on Irish butter. Suggest they take the UK to the WTO on the grounds that the UK and Ireland are bound. We've already signed a deal along with all EU countries [the EU just negotiates collectively].

Now since we are bound, the WTO jargon, tariffs and barriers have to ratchet down.

So we go to the WTO arbitration, and the UK says its a fair cop guvnor, we're bound.

Precedent set, nothing the EU can do about it. Free trade and no fees.

UK now goes for free trade deals outside of the EU and becomes the conduit to get past the EU trade wall.

I'm sure dirty tricks can play both ways.

The problem is not so much the EU as UK's Remain.

An influential and significant minority in the UK are doing their best to hobble Brexit. Indeed Brexit was caused by this minority because they have utter contempt for Anglo Saxon people and because they would not stop slapping them about the face.

The difference is that your colleagues wanted you to succeed in negotiations whereas our fellow countrymen *coughs* don't.

Nothing like going to war and there is certainly more quantifiable support than Remainer Blair and Remainer Cameron had when they actually DID take this country to war.

Did you take part in the referendum, Anon ?

If yes then your 'X' was also a pledge to honour the result. Otherwise the time to have objected was at the time that the Referendum Act was being debated. If you didn't then that was your omission, not ours.

Just saying, one hopes for 100% support in a war (see WW2 after Churchill tookover, give or take a few rebels) so that at least theres no need to watch your back. A different kettle of fish when a diffiult task is taken on and 48% of those behind you are not behind you, so to speak.

When your country has taken a difficult decision in a plebiscite agreed by all voting to a margin agreed by all you get behind it.

I doubt any nation supported war 100% but they supported their country 100% once it had been declared.

This encouragement to be "100%" behind an argument you didn't vote for and are not in agreement, is the sort of nonsensical mindset you find with those not willing to engage in debate.

The shape and form of any exit which will happen, is vitally important.

To illustrate a point, if the subject were not Brexit, and given what we know about May's capabilities would anyone blindly follow her?

Why not look at the detail before urging 100% support on anything.

We already had a debate.

After this we were asked the question "Should Britain remain a member of the EU or should Britain leave the EU ?"

The majority voted to Leave (by a margin of 1.4 million people - way over that agreed as a win) and it transpires that the only people confused about what this question meant were those who voted Remain, because I rarely (if ever) have heard a Leave voter say they were confused about what it meant.

So if Remainers are the only people confused about what the shape of Brexit was why are we bothering ? They didn't vote for it anyway.

You wonder sometimes whether the British negotiators have ever bought so much as a car.

So if Remainers are the only people confused about what the shape of Brexit was why are we bothering ? They didn't vote for it anyway.

There you go again. Only Brexiteers can decide the shape of Brexit. The "democracy" you flaunt is only applicable when you want to apply it selectively.

Electro-Kevin said...
This comment has been removed by the author.
10:25 am

Clearly leaving the EU is a protracted process. Leavers like me understand this.

Despite having won the referendum Remainers have 75% of the airtime. outnumbered 4:1 sometimes, often including the presenter. These are not figures plucked from the air but from the analysis of stats.

Remainers are in all the key positions.

So I ask what debate ??? I see a full and concerted attempt from Remain to control the shape of Brexit and even bring about a second referendum, in fact.

We Leavers have been very accommodating. Rather unlike the backward, anti-democratic imbeciles that Remain portray us as we were patient and used very long, due and *democratic* process to achieve, debate and win a referendum.

This after trying to warn the establishment that we were unhappy with things many many times.

Asking "What is the shape of Brexit ?" after we've already had the debate and answered the question (the format agreed by all sides) "Should Britain leave the EU or should Britain remain in the EU ?" is cheating and a way of keeping us in the EU.

It certainly signals to the Commission and the EU negotiating team that we are divided and uncertain.

No Deal has to be a very real option in order to get the best deal and this is what Remain do not accept and what Leave know instinctively.

This division and uncertainty can only have come from one place and it's not from those who voted Leave.

Were we the anti-democrats we should have taken to the streets by now but, true to form, we play it peacefully, long and patiently. Please do give us some credit.

"Despite having won the referendum Remainers have 75% of the airtime. outnumbered 4:1 sometimes, often including the presenter."

Despite having won the referendum Remainers have 75% of the airtime. Eurosceptics outnumbered 4:1 sometimes, often including the presenter.