May 2018 is the 200th anniversary of the birth of Karl Marx.   Not so many years ago, just about the only mention you’d find of the man was in Marxism Today edited for decades by Martin Jacques. Nowadays of course Marx has a serious revival, nay, a positive vogue.   Lefties from John McDonnell, Paul Mason, Little Owen Jones, all the way to Brian Leiter and Chris Dillow – are pleased to associate themselves to a greater or lesser extent with the bearded one. 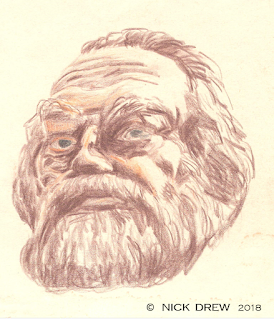 So – given C@W’s declared interest in Kapital, what do we think?  Marx 1.01 starts nicely with his opening paean to capitalism.   “What did the capitalists ever do for us?”  He had a fulsome answer for that and credited capitalism with relieving the western world from the horrors of the peasant way of life.  Plus a whole lot more achievements and public goods besides – science, technology, enlightenment, the lot.

From this perceptive and auspicious start, he headed off in two directions: some absolute dead-ends, and some useful insights. It’s not hard to be dismissive of several of his most famous themes: the ‘labour theory of value’; his historical determinism and belief in ‘dialectical materialism’ as a science (taken from Hegel, always a risky move); and of course his view on the timing of the Revolution - like early Christians and the Second Coming, he saw it as being pretty imminent. (This latter error indicates in turn that he was not at all capable of good judgement regarding the implications and outworkings of his own theories: he should have recognised that the pre-conditions he laid down were nowhere near being met in C19th.)

For all his overblown theorizing and system-building, there is no merit in throwing the insights out with the turgid bathwater. I would highlight two, before getting back to the good old Revolution again.

The first is a matter of social psychology.  Marx identified the phenomenon whereby capitalism’s wage-slaves fundamentally fail to recognize what’s really going on as regards both their own exploitation and their best interests.  There could be a lot of factors at work here but the main interest for Marx is how the ruling class reinforces its own interests by instituting a popular culture to mislead the workers systematically, and neutralize discontent.  “Religion is the opiate of the people” is perhaps the simplest way of summarizing a diagnosis that extends more broadly than religion, of course.  Another important coinage is “false consciousness” which bears reading up on, and to which we will return.  And, bridging the first and second insights, he also describes the “alienation” of the worker from his true humanity and potential.

The second interesting strand of observation, then, is a view on how capitalism evolves in terms of a cluster of market dynamics. Capitalism tends to foster monopolies and concentrations of ownership.  At the same time, it leads to ever greater technological advances, not least in the means of production and, importantly, automation; so that it is capable of generating the most extraordinary surpluses of goods with an ever smaller workforce.  But the flipside of this impressive coin is that the 99% become ever more alienated, immiserated and – perhaps most problematically for the 1% - impoverished, so that ultimately there is no-one left to sell all that superabundant stuff to.  Capitalism sows the seeds of its own downfall.

So where does Marx think this all ends – and how?  Well, Revolution of course: but the precise answer is quite important.  Recall that, thanks to religion, false consciousness etc, the workers don’t actually have a good grasp of what’s really going on.  Nevertheless, driven by their increasing misery, they eventually intuit - I think we are invited to see this in a Darwinian kind of way as a broadly unconscious evolutionary process - that (i) the 1%-99% split of ownership is so extreme, and (ii) the surplus of productive capacity and stuff is so great, that (iii) any change whatsoever in the socio-political set-up must leave them better off than they are at that point in time.  With the added rider that Marx anticipated this would happen globally all at the same time, this folks is the Revolution.

The final Marxist kicker is that all this is absolutely inevitable under his supposed ‘science’ of the direction of human history.  It’s not difficult to see how attractive this is to a certain kind of Murdoch-despising malcontent, and how easily it translates into an ideology for a bitter, revanchist political programme.

Tomorrow, assuming the Revolution isn't set for the Bank Holiday, I’ll come back with some thoughts towards putting all this heady stuff into context, and offer my own humble evaluation.  In the meantime, with the caveat that Blogger has changed some of its functions post GDPR - Comments is open …

I think you are going a bit far with Dillow - his views seem to be a bit more nuanced.
That he points out where capitalism is failing (using facts!), and then points out that in some cases Marx saw this coming, does not make him an uncritical marxist.

He has a strong belief (?) in the limits of knowlege (you cannot know everything) and a corollary of that is that central planning just does not work - and nether does centralised control of any sort and so the current cult of managerialism is also faulty and command and control businesses that cannot take account of ground truths.
He also is not anti capitalist, more that capitalism should exist within a moral framework (here ymmv).

I hope he can take a year off and write a book.

I would buy it.
Dillism.
Good with potatoes - v. british.

As you say, Dillow is nothing if not 'nuanced'

Are reality TV talent shows new new 'opium of the people' or is mobile social media?

I always presumed the former, but I decided to make myself single recently and couldn't resist downloading tinder onto my phone to see what it was all about. Now I'm half convinced it's actually the latter.

As I have said, Karl had a lot to thank his next door neighbour for. Henry Goddard was an old India hand from The Raj with some tales to tell, notably about The Mutiny and doorkeeper at the House of Lords. On the other side Edwin Willis the organ builder (including the Royal Albert Hall) would have taken him through the hymns ancient and modern. If only Karl had taken the cloth and someone had found a decent parish for him how different things might have been.

Social media and other modern activities like online gaming encourage active engagement and interaction. They are stimulants rather than soporifics, which is why the excesses that are sometimes associated with them are those of anger and confrontation rather than indolence. They are more like caffeine than opium.

That is actually a big change from the popular media of the 20th century, as movies, radio and television put the audience in the role of passive receivers of broadcasts from the centre. It's a technocratic, centralising, homogenising form of popular entertainment that was perfectly suited to the Big Government central planning delusions of the era.

But politics is downstream of culture, so we might expect that the new technological possibilities represented by social media will lead to new cultural habits and therefore to changes in mainstream political attitudes. What would Marx have said about changes to the means of production of entertainment?

I don't agree. I think social media discourages meaningful engagement. Look at all the people in the pub ignoring the people they are sitting with whilst texting and liking on their phones. It's impossible to build a meaningful connection with somebody by texting them. Whereas pre-electricity methods of engaging with people such as dance (for the opposite sex) or sport (same sex) actually work. I'll be spending all summer out dancing and playing cricket, not texting damaged individuals on tinder and facebook. I feel infinitely more connected to bloggers I've met in the flesh than those I've not.

Now there's one guy who comes to one of my dance classes who is a highly accomplished 'player'. He does use social media to advertise his lifestyle and follow up leads he meets via the many young women that try out the beginners salsa class for a week or two. I'd wager he wouldn't have anywhere near the astounding success he has with hot women as much as 10 years his junior using tinder to choose his marks. Without social media he could simply revert to telephoning them. Without people congregating in the flesh to get up close and personal he'd be stuffed.

Sounds like he's OK in the stuffing department anyway.

Marx was a rubbish thinker, a windbag, and a scrounger who never did an honest day's work. The worst and most noxious kind of politician.

It is appalling that the became the god of a new religion, which revived the practice of human sacrifice.

My reasoning is that the internet optimises itself to give you an experience you enjoy (and so you will use it more) and that experience is fitted to you.
No need to compromise.

Out in the real world you have to meet and live amongst many real people and you have to compromise with every step you take on a crowded pavement.

This isn't just social media, this is amazon prime with 1h delivery etc.

Thanks I will get it despite the reviews.