The Twists of Sadiq Khan Point the Way 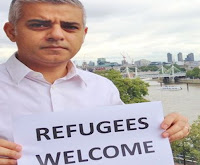 Readers will know I have long considered Sadiq Khan to be an excellent indicator of what's to be expected from the left, and often more generally.  Last week there was a distinct sighting of Khan on maneouvres, and here's how I read it.

He was on the box in the wake of the latest Westminster *terror attack* (soon to be forgotten, I think, such is the numbing force of repetition), bigging up the Police as well he might, seeing as how they may come in very useful for him one day.  "While we've got you", intoned the questioner, "I have to ask your view on the Labour antisemitism thing ..."

Well of course citizen Khan said it had to be rooted out, but then something interesting happened from his lips.  He proceded to say that Corbyn was exactly the man to do it, and went on to say how closely he'd worked with him over many years and what an excellent chap his is, and that the main thing was to get a Labour governent under Corbyn that would pass new anti-racism laws.

Words like that are not uttered without significance.  This is positively Mandelsonian in its disingenuity and careful preparation - indeed, we may guess he had arranged to be asked the follow-up question -  and at very least we may assume that Khan now reckons there is a significant probability of a Corbyn government really quite soon.  (I think we can read even more into it, but that's enough for now.)  He certainly hasn't always seen things that way: the really avid Khremlin watcher could readily come up with Khan-quotes along the lines that Corbyn is useless and that he only proposed JC for leader in order to stir things up a bit, but certainly had no time for him whatsoever, oh dear me no, dreadful no-hoper.

Now you may well be saying: everyone in the country reckons there is a significant probability of a Corbyn government really quite soon!  OK: but not so many prominent people actually say it - mostly Tory backbenchers trying to scare other Tories into whichever fold they think their colleagues ought to be in.  And most senior Labour people are either (a) guarded and coy, for fear of seeming complacent / premature / frightening the horses (on the left), or (b) saying we shoud be miles ahead in the polls with the Tories in the state they're in & it all proves Corbyn is useless (from the right).

No: Khan's pitch is clearly to be well onside in case it happens, at what he judges to be a fairly critical moment.  (I also think he's proferring a highly self-interested strategy for Corbyn to extricate himself from the antisemitism thing - but that's another matter.)  Take note and watch.

Worth noting there's a selection process for the Labour candidate for the London mayor ticket and Khan isn't a certainty. He needs backing/votes from Momentum and the unions and so praising Corbyn is a surefire way curry favour and ward off deselection.

Khan is like Quorn - no intrinsic taste or flavour, but the ability to absorb this from elsewhere. He could be a Mementum groupie today and a Blairite tomorrow - whatever works best for his own ambitions. A fashionable BAME blank canvas that talks mockney to Londoners and RP to Newsnight, he's prepared to be all things to all people so long as there are votes in it. What he lacks utterly is the common touch - there's not a spark of real charisma there, and people simply don't get-off on him.

So I reckon he's just protecting his back, or even looking to stand again for Parliament, the Mayorality being a dead-end for an ambitious politician. In the Commons, no one would blame his malfeasance or incompetence for the morgues stacked with dead black kids, a London wide knife culture and Police loss of control of the most dangerous gang areas.

To be fair May filled him a poisoned chaĺlice by stopping stop and search.

Khan, the darling of the London Bubble.

He is a smart chap but my current thinking is that his support for JC marks peak Corbyn.

The next election will be unpleasant, but you can see Lab are very vulnerable to attack in places that will cut through to their core.

Once JC loses he will be able to say he did his best and lets follow his lead to the 27 election where the general public will be really sick of the cons and would vote for a horse with a red rosette.

the Mayoralty being a dead-end for an ambitious politician

Spot on. Look at Boris - total shambles with lots of photos showing what a shallow and inconsequential person he is.

Seems that London Mayor is the equivalent for "Person of the Year" - kiss of death. Though wholly deserved - the kiss that is.

A vanity office for vanity politicians. Created by New Labour as a stick to beat the Tories with. Boris was an aberration - the demographics of London mean that the mayor will wear a red rosette as long as I live.