Tourism in Salisbury and Saxony

Shouldn't laugh about so serious a matter; but, really.

Many years ago, when dinosaurs roamed the earth (Brezhnev, Chernenko, Andropov) I spent some time in East Germany.  Naturally, one was followed around almost everywhere, by tag-teams of Stasi operatives.  They came in two flavours:  superannuated coppers in grey trenchcoats and trilbys - and guys who looked exactly like this.  (Some of them, incidentally, were gay honey-traps.  So we were told.)

Anecdote.  One day I was out and about in Wittenberg, looking for a suitable present for Master Drew - then a pre-school kiddie.  I saw a bookshop and popped in to scan the children's section.  There, in the shelves marked Für 4-6 Jährige, was the following attractive offering. 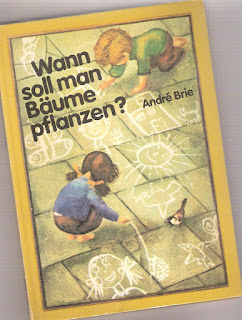 I had a quick scan, and it turned out to be ... an anti-NATO propaganda tract!  Well, obviously I bagged it right away and joined the check-out queue.

At the time, my follower was the ageing Herr Trenchcoat, who desperately wanted to see what it was that had seized my interest.  So he grabbed the nearest book to hand, and joined the queue behind me, straining over my shoulder to see what I'd got.  I turned to look, and there he was, carrying a copy of - Windsurfing for Beginners!

I forebore to ask him if he had a trip planned to Warnemunde.  GSOH was not a requirement for his employ.

The thing is, their story looks just as credible as the one spun by May et al

Odd, how the British Police can apparently trace these two ( why they insisted on going everywhere together on this supposed 'clandestine operation', is anyone's guess ) everywhere they went on the UK Police State CCTV system. But when my motorcycle was stolen from outside my house, and I provided them with my own closed circuit TV footage of the event, their only interest was to pester me three months later to agree to close the case.

En passim: I went to Milan and sat outside the Duomo, which is quite famous in it's own right although I admit I have no idea how tall it is, I just went there because ....

If Putin wasn't showcasing his useless idiots for domestic consumption, the 'it weren't me guv' claim would have been much stronger.
But , like Hillary's emails, there really isn't a plausible explanation for those two traipsing round the Skripal's house and having Novichok in their hotel room.
The denials are so weak, because , without the truth, which they cannot give, they have no explanations.

I heard a Kremlinoligist type give the most plausible explanatory yet.Because the 'why?' in this case is hard to decipher.
He suggested that some GRU chief, looking for advancement under the brand new, soon to be elected on a landslide, Putin regime, fancied currying favour with the ultimate Boss. A 'welcome back capo. Look what I did for you. I knew you'd be pleased. Perished in agony. And no one can prove a thing.'

Some 'best before' 1981 dated novichok. Two bods who also wanted to be in favour and a few grand from the budget.

Plausible as anything else, I thought.

Now, you might have a point. One argument was that Skripal's murder was a warning to all other Russian operatives. But without the willing cooperation of the British Broadcasting Corporation with it's disproportionate coverage of the incident. Who in Russian would ever have heard of the matter?

Now, it's all over the news, RT has run with it and the British Government is making a mountain out of a molehill. It's getting domestic coverage in Russia where it probably wouldn't have previously.

Still not understanding why they didn't just off Skripal with Ricin manufactured from beans bought in Salisbury's and refined using a home chemistry set bought at Toys r Us? All the time hiding in his attic.

But the last 'British Intelligence' case fabricated along those lines was drummed out of court too...

As far as I can see there is little to no evidence that "those two traipsing round the Skripal's house and having Novichok in their hotel room." actally happened.

They were seen on CCTV away from the Skripal house - the timings do not fit either. Nor do the so called "Novochock" signatures.

So you are relying on a given narrative;
I agree the whole Skripal scenario is really odd, the subsequet deaths also so UK security services to be completely incompetant or just completely vile.

I'm not even confident the 'British' 'Intelligence' 'service' is actually acting on behalf of the British.