The Guardian: Oh, So Cruel

This callous juxtaposition is surely going a bit too far ... 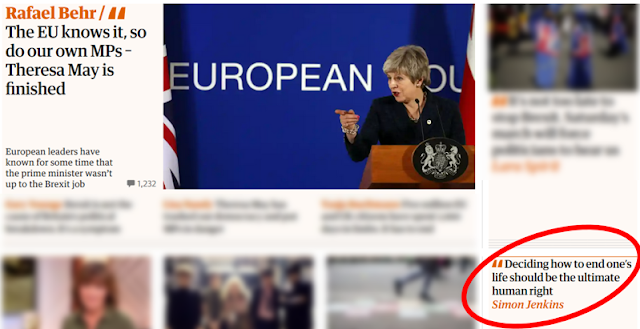 How did we become Greece?
Too furious to remain.
Too scared to leave?

I blame May. 100%.
And not because of the majority loss.
But the very paucity of her ambition. The timidity of her Brexit. Setting us up from day one for a Tory party politically acceptable Brexit. That utterly failed to consider the wider country. Remain or Leave.

At some point these useless shits must face the electorate. I look forward to defenestrating every single last Quisling.

Any move to kill Brexit can now be viewed through the prism that a Celebrity/Remainer's mere petition is more valuable than a proletarian's vote.

Incendiary. And so much for equality.

BQ 1.34pm: I too blame May but it cannot be 100%: her Party put her in charge, an act which still baffles me and which means the Conservatives have a heavy burden of blame for the humiliation & disgraceful chaos wrought on our country by May since 2016. What on earth were they thinking of? It is beyond comprehension: they knew her even better than we did - and we'd observed her cack-handed boring technocratic failure to get to grips with being Home Sec... May is robotic, or possibly a bit "not altogether" as my granny would have said. How can Tories hold up their heads in public?

It's not baffling if you don't want Brexit.