We Are Not Well Served 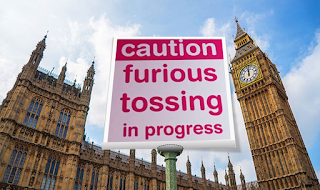 Is it possible we are experiencing the birth pains of our new national order?

Once we have left the EU, the rats who have exposed themselves will no doubt be extirpated from the body politic. Won't they?

We will be leaving, of that I have no doubt. And once we are out, our rules for government will have to change, even if it takes a decade or more to achieve. And if we don't, mores the pity, hang our traitors I think we'll use less drastic measures to get rid of them once and for all.

We will once again have to select a better quality of public servant because they'll no longer have the excuse for inactivity that the EU rules won't let them do what we want and pay for them to do. Tokens will no longer be acceptable, Miss Abbott and co.

Unfortunately it takes volunteers and good ones at that.

If we remain in any form I say abolish parliament altogether. We may as well be ruled directly by the EU.

I'm not sure we are witnessing birth pains, death throes is more likely. I am currently completely gobsmacked and in despair about the entire political establishment. Over three days I have watched grown men and women vote for 2 impossible things before the 29th. Then (possibly realising what they have done) vote to do something that is beyond their power(extend the deadline). Someone, and it won't be Mrs. May, needs to start banging heads together.

A third vote and the WA gets through - and a second referendum (and a third, fourth.. however many it takes.)

I thought it was over this week but apparently she's going to try again.

I think we can all agree on the need to destroy the Tory party. Of course, the other Westminster parties are no better but there will be a modicum of satisfaction in turfing out MPs from a party so utterly unfit to govern.

I think there is a good chance the ERG (and maybe DUP) will fall in line at the 11th hour. They were already hinting at it before the 2nd vote.

I wouldn't mind an extension but it needs to be years not months. This whole mess is due to the EU's purposefully impossible time limit on A50.

I think your post is great This is one of the best Blog. Keep up great work Uni Essay writers UK based.

I can't actually see what is wrong with the approach so far. Our legal system and our politics are based on "winner takes all". Within the parliamentary system, the winner appoints an executive who then takes the policies forward based on their win. There is no need to consult with anyone else - only the need to execute the manifesto on which the winner was elected.

In a much simpler version of the above, the Donald is doing exactly the same.

... or do you want to change a 1000 years of our legal and parliamentary system?

I feel we need a system that hold MP's to better account - maybe a variation of the American system.

We have an executive branch and we vote for the PM/Party who set the then each MP in the commons has a local manifesto of the things they stand/would vote for and the MP's are on a fixed two year term.

If the majority of the PM's and Executive have a different view then no government happens until such time as there's alignment between the two.

OK I've clearly not thought this through fully - anyone with better ideas of an effective form of government in our new utoipa kingdom?


The trouble is that the winners had no idea what to do once they won.

These were the slogans which framed a blank canvas that 52% of the population filled in with their own hopes.
I was looking for a quote that went along the lines of dominic cummings told gove and bj to not explain what exit meant in detail as at that point it would be picked apart - and could not find it.

however, I did find
https://blogs.spectator.co.uk/2017/01/dominic-cummings-brexit-referendum-won/

and having read it can only say dominic cummings for pm.

john cheshire said...
"Is it possible we are experiencing the birth pains of our new national order?"

The old order is collapsing but the new order, whatever it might be, has yet to emerge. You may find Sam Hooper's thoughts on "the discontinuity" of interest:
https://semipartisansam.com/2017/11/14/discontinuity-leadership-and-britains-place-in-the-world/

Could I come back to "the will of the people" or the wisdom of crowds.

In 2016, the crowds (the people) decided we want out. In 2017, the same wisdom was shown when TM's ability to railroad *her* view of *their* wisdom through parliament was withdrawn. She either had to seek consensus which she doesn't do, or seek a partner in the DUP.

So since it is plain, the crowd want both Brexit and the DUP version of Brexit, why can't she just take the instruction of the people on board and do it - or get out the way.

If she doesn't want to follow the DUP, she either has to seek a full mandate again (unlikely) or seek consensus (even more unlikely)