Muddying the Waters in FB ... and Moscow

Today we read that Facebook intends to merge, in systems terms, various functions across various of the platforms it owns - FB, Instagram, WhatsApp, Messenger, etc - in order to make it harder for regulators to split the company up, Standard-Oil style.  (Google, incidentally, spotted this wheeze a long time ago - and it cost them an astonishing amount of development $ to achieve.) 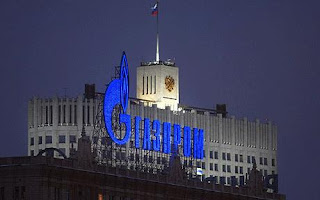 Reminds me of a similar but lower-tech story from my days in Moscow.  Gazprom, inevitably, was my main counterparty and I was in their fine new offices a lot.  My Russian staff used to get me to buy fresh bread rolls from the canteen there - the Moscow City bakery only baked twice a week, but Gazprom's operated every day! - and to make this easier, they procured for me (I never quite knew how) a Gazprom pass ...

I was professionally very keen to get an accurate company organisation chart for the sprawling giant.  I was supposed to conduct all my dealings through the Protocol department, but after I got a bit of a presence in the company, people would just invite me in for a chat (out of sheer curiosity, as much as anything: I didn't conduct my affairs in quite the same way as many expats).  I had several memorable (and quite candid) encounters that way, which may be posts for another day.

Anyhow, I asked for the org chart, and was given this bizarre diagram, several times more complicated than the tube map of London, with dotted lines criss-crossing everywhere.  It was of course designed to indicate that there was no such thing as a modular division within Gazprom, oh dear me no: nothing that could be identified as a candidate for breaking off and floating separately - a fate which Gazprom dreaded.  (It was complete bollocks, of course, there were loads of meaty corporate chunks that could easily have been autonomous.)

This wasn't getting me very far towards understanding the hierarchy (which, in Russia, is an extremely important thing to do - КТО КОГО - who does what, and to whom?, the first thing you need to establish in any dealings with a Russian set-up).  But having studied these matters in some detail in my soldiering days, I knew there'd be an answer; and I had my resourceful staff procure me a Gazprom internal telephone directory.  The numbering system set it all out clearly ...

The Zuck is like many other people I've encountered in my career(s) in IT - controlling to the Nth degree and convinced of his own correctness. It's a defence mechanism, and one I've used myself in my younger, less certain, days.

Usually as you gain experience and confidence, you realize that being wrong isn't a bad thing - being wrong, ploughing ahead and ignoring all dissent on the other hand, very much is. The opinions of others have value, even if they're wrong they provide food for thought, and provide an offset to your own biases.

Zuck never had that, he won big at an early age, and he's set up FB in manner that reflects his fragile ego which has simply entrenched that defence mechanism. Breaking up FB would likely benefit it - governments around the world are losing patience, smaller more nimble units are less easy for regulators to catch in a net and less printworthy for their arcane tax structures. But that would require relinquishing control, and a look at how the voting rights are distributed will tell you how much he loves giving up control.

So, he'll get his way, but in the next few years he's going to discover that governments have much bigger toys than he does. Same with Google.

The only one to currently have a richer array of fighting tools is Amazon, AWS is embedded in a frightening level across many countries IT infrastructure, and that something I expect we'll all come to regret.

Nick, I am certain you heard some fascinating stories from your Gazprom chats. They would make for a very interesting post at a later date.
TonyB

DJK - yup, that's about it: and not just in the capital-P Political sphere, either

Anon @ 1:32 - thanks for the insight. I knew Amazon systems and servers were omnipresent, but hadn't heard it described as strongly as you do

The Moscow Bakery only running two days a week reminds me of one of my favorite, possibly apocryphal, but too good not to repeat stories:

In the early 80s, a senior Soviet economist was invited to a tour of England to consult, research, and give speeches. After a couple of successful days, he asked if he could see the London Bread Board. His hosts were puzzled what he could possibly mean by that. He explained he had worked at the agency responsible for the bread supply of Moscow and would like to see its London counterpart.

Apparently it took a long time convincing that there was no such thing. That as vital a product as bread is baked, distributed, warehoused, and sold through the completely uncoordinated profit-seeking actions of thousands of individuals and businesses. And yet there were no bread lines or riots!

That even such an educated, worldly Soviet economist(!) would so completely fail to understand was shocking to me and probably explains, in part, why the Soviet empire despite the many advantages over the West and gifted individuals at its disposal, in the end fell over like a house of cards. They just did not or could not understand how our societies actually work.