Postscript: We Got Those Algorithms!

Had to smile when this little ad popped up over one of CU's recent pieces where we have been wondering about the fate of commercial property. 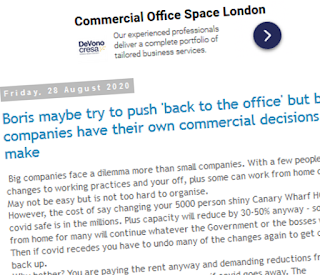 Perhaps the algo detected those of the BTL comments that were upbeat!  Because let's face it, some of them weren't ...

But if the lockdown has taught us anything, it is that technology can be used to resolve just about any problem that could be resolved in person

CityAM are running a series of articles which might be entitled - "if you own property, don't panic"

I'm hoping a bit of common sense kicks in, trying to command the tide not to come in isn't going to work.

Some of the office space can be converted to residential, and probably at a better standard than the pre-pack box places like Manchester have been vomiting up of late, and to see if that flies.

The trick will be to stop them turning into tenement hellholes, but you've got good communications (usually) in terms of transport and connection speeds, plenty of shops.

There'll have to be zoning, so that if/when night life returns to normal, no one is moaning about the noise.

But, change is an opportunity.

The Gods of Progress move forward with a grim inevitability, you'll run out of sabots before they run out of cogs, but in their destructive wake you'll find fresh opportunity.

"tenement hellholes": eh? A tenement is just a block of flats. I've lived in three, one of which was a wonderful Georgian tenement in Edinburgh.

But, dearieme, can you sing "The Tenement Symphony"?

Working from home. The panacea.

Except you can't if there's no electricity.

And with the UK governments energy policy an utter farce.

Pretty soon, yer won't be able to work at all.