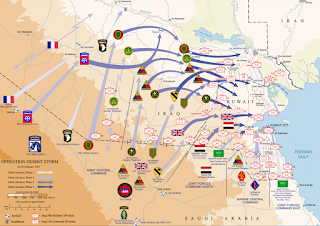 30 years ago, the USA having determined that Saddam was to be booted out of Kuwait, Drew had rejoined the Colours and was busily participating in the effort to bone up on two areas of lamentable ignorance on the part of the Staff:  (a) the surprisingly impressive Iraqi Army (see the last three episodes); and  (b) the likely battlezone itself.

So: break out the maps!  - the "Going Maps", the ones showing all the obstacles and bridges and tracks; and which of them were unsuitable for tanks etc etc; i.e. the state of the "going".

It's interesting.  From the very start of WW2 this became a major issue for the British Army across much of North Africa where Britain found itself heavily engaged, first against the Italians and then of course the Afrika Corps.  The situation was more-or-less OK in a large swathe of Egypt where extensive aerial photo-surveys and subsequent detailed ordnance mapping had been conducted during the interwar years (at the expense of the Egyptian government!) for the twin puposes of irrigation planning and, as a simple subsidiary task, archaeological exploration.  But other areas gave a lot of grief - all the way across Libya, Tunisia - where French pre-war mapping proved inadequate - AND (amazingly) much of Sicily and Italy!  The requisite high-grade mapping needed to be done almost from scratch in many areas of that conflict, which necessitated a highly unwelcome diversion of aerial recce resources from their primary purpose of intelligence-gathering.

AND: there had been almost no WW2 fighting in and around Kuwait, or even the Persian Gulf at all.  Britain had invaded, firstly Iraq and then (in combo with Russia from the north) Iran, for the triple aims of (a) securing oil; (b) establishing a safe route for supplying war materials to Russia;  (c) both Iraq and Iran were deemed to be Axis-leaning.  But both these actions were rather to the north of Kuwait, and were all over in just a few days.  So there hadn't been any need to conduct military-grade mapping of the area we were now interested in.  Just a couple of years later (1992, from memory), the military forerunner of a Google-Maps type system came into use.  But in 1990 we were stuck.

Fortunately, the cavalry was at hand: the CIA came up with excellent Going Maps of the entire area for us - I think they had the entire planet covered.

Amusingly, for those of an historical bent, there was in fact a precedent in the shape of some earlier military maps that could be laid alongside the modern American ones for comparison.  From somewhere in the depths of the archives the MoD did turn up British maps of the area - dating back to the 19th Century, the work of intrepid explorers of what was then known as the Great Sandy Desert** of what we now call Kuwait and Saudi Arabia.

In those C19 volumes were to be found Going Maps of a different era:  "Track, ten miles, almost straight but soft going and gravel, passable for pack mules but not wagons or artillery ... bridge, suitable only for crossing on foot".  The modern version would make equivalent comments - but for trucks and tanks ...

Fortunately we had several months to lay our plans.  And the Royal Engineers are very good at preparing maps.

Next time:   the coalition of George (HW) Bush

**There is another desert region that goes by the same name nowadays - it's in Australia.

Yes, very interesting. I think when the series is complete it should be compiled into a book.

Trouble is, Don, as I said in the first episode - unless there's a big declassification under the 30-year rule**, all the really interesting stuff is when the shooting started, (Jan-Feb 1991) and I just won't be able to write it
_________
** formally, it doesn't exist any more, even though I'd kinda hope 30 years might seem enough. But HMG is extremely tight, compared to the Yanks who are more rational (the CIA has a magazine, see below). But that won't help me.

OK Nick but what you are able to write about is still very interesting to the average bod who doesn't ever consider things like tanks not being able to go on ordinary roads very easily (in one of your earlier pieces). Not many people have any experience of the army or middle eastern countries so it's all good stuff even without all the military secrets.

A book could be something to do in retirement perhaps? Meanwhile we'll look forward to these posts.

Very interesting. Long ago cavalrymen sketched the land from horseback and sent back notes. Sketching seemed part of the training. Had a special wrist mounted board for the job. There was even a Sandhurst Protractor for checking elevations in the field.

Then back in the day the army also did quite a bit of survey/intelligence/anthropology work and published nice little monographs. I had one about some corner of the Northwest Territories printed by the Electric Press at Peshawar. Gave a nice pen portrait of the charms of the Afghan people. Published by the War Dept, might have saved a lot of bother.....

Curious that we did not seem to know much about Saddam's back yard and even curiouser that we later 'knew' so much about his technical capabilities.

Sketching - yes, absolutely, Jim, it was indeed part of officer training. Another time (as I always say) I will post examples: clearly some officers were really quite artistic! - and accurate, too, where photo evidence exists alongside

curiouser that we later 'knew' so much ... accepting fully the force of your apostrophe; but, well, errr - we did quite a lot of intelligence work, belated but intensive on the whole thing!

"tanks not being able to go on ordinary roads very easily": that was one of the successes of the bombing and sabotage of the French railways in 1944. Gerry had to move his tanks by road.

Horribly OT, but when I heard they'd mislaid 15,000 Covid cases I said to myself "I bet they're using Excel!" and lo, so it proved.

I ran a few projects where data pinged in .csv files between systems and learned most of the ways records can be buggered and/or fail to reconcile in moving between such files, Excel and various databases.

But the only way I found out was by maintaining reconciliation records for every stage of the process (we had the regulator looking over our shoulders), so when discrepancies arose I knew to investigate and find a fix. But these guys don't seem to have done any such thing. Importing .csv files into Excel is fraught with dangers - if it thinks the data is numeric it'll knock off the leading zeroes, bad news for say 10-digit account numbers. On occasions it'll turn a number into a date. And it'll turn dates into American dates, "09/11/2001" will turn into September 11 given half a chance. You need to know your data and what values are likely.

But even given these issues, if someone had just done some counting of record numbers... what's the betting the "IT consultant" was one of the KPMG two years out of uni types rather than a grizzled datamangler...

The stuff shouldn't be in Excel anyway, or if needs must it should be out as soon as possible into a secure SQL database. Excel can still only handle a million rows and 16k columns, that's not changed since 2007.

Lieutenant Charles Harford,an experienced Lieutenant attached to the Colonial Natal Native Contingent during the Zulu war, the famous one, led the first attack against the Zulus under the watchful eye of the British Commander, Lord Chelmsford.
Harford was an eccentric young colonial officer whose passion was entomology not military science, and who in the heat of this engagement disappeared momentarily and was thought killed, but emerged unscathed, having been merely distracted by a rare beetle he had spotted and then captured in a matchbox.

He also drew the surviving sketches of the Mission defences at Rourke's drift, the day before the battle. And did much writing about what he saw, both before and after the battle.He was an acomplished sketcher. As were a considerable number of the officers in this campaign. The most noted being Lieutenant Coghill, who won a posthumous VC at the Battle of Isandhlwana in the same war.

Jed Hotchkiss was general Jackson's mapmaker in the US civil war. More than one historian has credited much of Jackson's amazing success at fast marches. Lightening attacks and swift withdrawals like a phantom army, to the Hotchkiss maps.

"The Shenandoah Valley had never been mapped in detail before. Running 150 miles in length and 25 miles wide, it was a daunting task, but Hotchkiss accepted the assignment, and worked on the map for the remainder of the war. In order to accommodate his large scale of 1:80,000, he glued together three portions of tracing linen to form a large single map of 7 feet by 3 feet."

@Nick - what you can say would still make an interesting read, all collated!

@anon 5:03 - the government obviously used all its luck up at the election. There are a pile of public sector projects that use Excel, and it had to be this one that exploded into public view.

The NHS, and related setups, love Excel from management upwards and tend to demand it has some part in things regardless of its actual suitability. So I expect this was an edict, that the dev teams did their very best to satisfy and didn't test quite as they should.

It should have been a simple ETL job, pushing to a central database, with Excel wired up to it via a datareader role.

The underlying reason for the Excel fiasco(s) is that Microsoft have practically every organisation, big or small, sewn up as tame customers. Sales are their strong point, rather than software.

Admittedly Windows 10 isn't as bad as the previous versions.

Government IT would be laughable were it not so costly. Anyone with IT nous goes to the private sector. Many years back in a long stint in Taunton putting a new machine for Somerset CC's library system, we had an overnight powercut to the computer room.

When power was restored, our machine went straight into automatic recovery from its journal, was up and running again in 20 minutes, with a report on any transactions that might need checking.

There system was restored and running 36 hours later.

Planning, responsibility and defining the actual product is what tends to bump the costs up, capabilities down and it's never the bozos responsible who get it in the neck.

I've encountered a lot of capable bods in my public sector clients, moreso than some of private sector ones, mostly as they've had to juggle the crap the likes of Northgate, BT and BAe have shoved their way over the years.

The decision makers, on the other hand, the public sector certainly pips the private there in their selection of incompetents