"Affordable" as a theological concept: the Energy White Paper 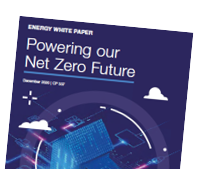 As part of the usual service to t'readership I tend to offer a pre-digestion of big government reports like the Energy White Paper, published last week as part of a raft of important documents**.  This one, however, defies easy summary, except to say that the clue is in the name: Powering our Net Zero Future.  A big turn-off for some, no doubt: but that's where we're headed anyway, and I find it interesting to see how they go about discussing some of the challenges.

Actually, of course, they don't anywhere quite say this is going to be bloody difficult, if not actually impossible.  But for those able to read between the lines, there are hints enough in the veritable smogasbord (cliché ! - Ed) of interesting issues set out.  There's some intelligent work going on across a very broad front, most of which seems (on this evidence) to be fairly clear-sighted as to the difficulties involved.

So dive in if you are interested; but I want to pick up on one overarching aspect.  The government claims to be most concerned that the costs of Net Zero to be borne by Red Wall voters the ordinary energy consumer are "affordable", a word that appears 19 times.  Sounds like an appropriate concern, right?  Well we may be glad they have it in mind, but I'm sorry to say, it's almost meaningless.

Anyhow, the government has *affordability* on its agenda: and in practical terms we may hope this means they will - as the White Paper avers - ensure that contracts are awarded as competitvely as possible, a continuity / extension of the extremely successful CfD auctions of recent years; and hold Ofgem to their mission of beating up on the natural monopolies and suppliers.  Sadly, one can easily find some cases where the WP indicates they'll just be doling out largesse to chosen "(pick-the-)winners" - rarely a good idea.  Then again, these are mostly R&D-type efforts, one of the few areas where government intervention can sometimes genuinely pay dividends (for someone).

The really egregious stuff comes in the vexed area of nuclear power, which must demonstrate "clear value for money" (= "affordable", obviously), and that the industry can prove it is able to "reduce costs & deliver on time and budget".  Given all of recent history in the matter, will EDF be put off by these strictures?  Don't make me laugh - we already know the evidence-free, jesuitical arguments they will deploy on this one, when the time comes.

** one of them details their modelling methodology which, they claim, generates 700,000 separate scenarios for 2050.  Call me lazy but I ain't reviewing that one ...

I don't think the problem with nuclear fission is that it's expensive. The problem is that almost all the cost is up front, and the power stations take decades to show a profit. But reliability is a good thing to invest in.

Buying wind turbines instead of nuclear is like buying a tent instead of a house, because a tent is cheaper.

Does the report discuss what happens when there is windless weather in January ?

And do they still think that burning imported wood is "renewable" ?

Well, I know (for a fact) that they know that it isn't - as does everyone in the industry - but (a) they've remained schtumm about it for several years; and (b) Red Wall Jobs. Lots of 'em - not just at Drax itself (a fairly big company now, which is f****d without its subsidies), but in the substantial UK wood chip supply chain, at the ports, storage facilities and on the roads

there are hints in the WP that they are going to tighten up biomass sustainability criteria: but at the same time, they seem to believe in BECCS, which is this biomass nonsense on stilts

Minor quibble. It's ideological and not theological unless there is a mythical being involved.

But there is a lot of ideology about subsidies whether it be power or food or zombie manufacturing. It seems the quest for small government gets further and further away as a new ideology (theology) appears, stoked by MSM.

Following the 'tent' and 'house' metaphor (and possibly overextending)

Nuclear is like the taj mahal, great (and cost a lot to build) but if there is an earthquake you not only do not have a palace but also a lot of building waste that will cost at least as much to remove the waste as to build in the first place. And nowhere to sleep. And anyone living nearby will have nowhere to sleep as well.

Tents are great. They are cheap. Much cheaper than a house. If you need a bit more space, add another tent.

Historically we have built proper houses as 'that is what you do'.

We seem to be vulnerable to bad weather that could blow tents away.

One way of allowing for that risk is to have a contract with someone who has a lot of palaces. But palaces are costly.

But do you trust the french to supply on demand - even if there is a contract?

I think nuclear power stations are built to resist much stronger earthquakes than we ever have in Britain.

The Fukujima disaster came from flooding by a tsunami, not from the earthquake shock. All the other Japanese power stations were unharmed.

Report of a new catalyst, using Iron as the metal atom, that converts CO2 plus Hydrogen into jet fuel. Useful if it can be developed on an industrial scale.

There's plenty to do while we wait for Boron based nuclear fusion to be made to work.

@ Anon 4:32
Maybe Nick is trying to say it all in the lap of the gods really!

As for Windmills -v- Nuclear the good thing about windmills is that if one is damaged, the next day you can start putting a new one on the same spot. With nuclear you have to wait a 1000 years or so. In my opinion anything that leaves a threat for 1000s of years is bad idea - remember our mate Ozymandias!

Somehow there has to be either a real eureka energy invention or a balancing eureka moment for our lifestyles. Really in 1000s of years what have we really achieved? We started with a fire at the mouth of a cave, moved it to the middle of the house (with roof vent). Then invented the chimney which moved the fire to the edge of the room(s). Lately (for gas/oil) we have put the fire in a box in the corner and for leccy we moved it out to another building and built a bigger fire.

Windmills and solar don't need a fire except to manufacture them, moving the fire even further away. We are realising that we have burnt nearly everything there is to burn without choking ourselves to death. Maybe the problem is actually fire itself and we need to outgrow it somehow.

Theological vs ideological, anon? We like such quibbles here: we're a civilised blog, as others have kindly put it

It's just an idiom (see also 'jesuitical' later in the post). What's being implied, is that the answer will come ultimately from a High Priest, who will mutter some words that sound like they mean something but they won't stand up to scientific or logical scrutiny.
= = = = =

('Political' would do almost as well. It's like the EC's rulings on the subsidy for Hinkley Point. The first edict, from the Competition Directorate, running to 80 pages of densely argued text, concluded that it was illicit State Aid. A few months later, HMG and the French squared the Commission and another lengthy ruling concluded it was just fine.)

@ do you trust the french to supply on demand - even if there is a contract?

no, of course not. Nobody would. They have decades-long track record of screwing up, plus a massive court case from the Finns who have also been shafted by them. Recall that in 2008 the chief EDF frog said, if Hinkley Point C wasn't up and running by 2017 there would be no Xmas dinner for the Brits.

Ouanquère, as Steve Bell has it, concerning such froggies

P.S. The Being who elevates greenballs from ideology to theology is, of course, Gaia.

Came away with 'an awful lot of job creation here'. Then a tiny reference to Cash Cows, but no mention of the other three quadrants of the matrix. Therein lies the snag, if I were Shell et al I would look to pump the cash cows and avoid the dogs and problem children. Those rising stars may not be in energy at all, no obligation to be an energy provider forever - especially if the physics and economics are unfavourable. Which leaves an opening in the market - or a hole for someone.

Which speaks to the other feeling I had reading this just the once - very hopeful. With the emphasis on hope. Definitely theological.

@ if I were Shell et al I would look to pump the cash cows and avoid the dogs and problem children ... no obligation to be an energy provider forever - especially if the physics and economics are unfavourable. Which leaves an opening in the market - or a hole for someone

As noted a few weeks ago, you can just see Exxon wondering to itself: maybe there's a place for just one totally unreconstructed old oil company ...
http://www.cityunslicker.co.uk/2020/10/decline-and-fall-of-exxon.html

I’m for nuclear over windmills every time. In another incarnation Boris once said that windmills couldn’t pull the skin off a rice pudding and he was right. After all the investment and subsidies, and the environmental damage involved in manufacturing them and filling the countryside with them, they still produce power that is expensive, unreliable and often derisory in quantity..