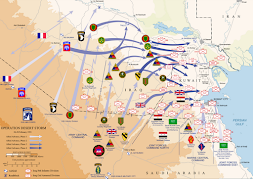 The politics of the Middle East is something we don't tend to stray into around C@W, there are too many obvious beartraps (not to mention lurid conspiracy theorists).  However, salient headlines on the high-level situation at the time when Saddam made his ill-fated 1990 move on Kuwait can readily be assembled - see also my previous series of posts.  (BTW, I'm not aiming for my doctorate on late 20th C geopolitics here ...)Incidentally MrsT was, in domestic political terms, in a real mess at the time (Poll Tax & generally declining authority), which became steadily worse as the weeks from the invasion went on; and concluded badly for her long before the end of 1990.  She desperately wanted to reprise the 1982 Falklands triumph++ and begged Tory MPs to let her stay on until the job in Kuwait was finished ...

No such luck, she was well gone before the fighting started - on 17th January 1991.

To be continued.  Perversely, it may take me longer to recount the tale than the actual fighting lasted ...

^^ attributed to Kissinger, but surely some American isolationist must have said it about Germany & Russia before the USA came into WW2?

** to be fair, it's entirely possible Jeremy Corbyn bought it

++ she'd been hankering after a re-run ever since: subject of another History Corner story I may feel able to recount one day...

"** to be fair, it's entirely possible Jeremy Corbyn bought it"

Very likely, given his 100% record in getting things wrong :-)

"Many commentators suggested Saddam even believed he'd been given the green light on Kuwait."

I'm sure I have read reports that Madelaine Albright had at least one meeting with Mr Hussain, prior to the invasion of Kuwait, where she indicated the US had no interest in what he was proposing for Kuwait. My recollection is that Mr Hussain interpreted that to mean the US would not interfere with his invasion plans.

Is this correct? Was Mr Hussain lulled into a trap? Was Mrs Albright speaking without authority? Or is this just a story?

In your opinion, back then who was the lesser of two evils from a Western perspective - Iran or Iraq?

Could things have been better if we didn't invade Iraq and let them fight amongst themselves?

I don't understand very much Middle Eastern history or politics, it just seems a never ending quagmire (but a profitable one for certain Western interests)

One of the great strategic blunders of the 20th century: Iraq’s failure to blitzkrieg Ghawar and Riyadh. Would have mollified both Iran and thrilled Russia with higher oil. At that point, any Western intervention would have been bled to death. Electric vehicles would’ve arrived a lot sooner, ha!

"surely some American isolationist must have said it about Germany & Russia before the USA came into WW2?"

I imagine some Greek, Sumerian, or Pharaoh must have said it a wee bit earlier.

"Was Mrs Albright speaking without authority?" It may be that the protagonist was not the execrable Madame Albright but the US Ambassador April Glaspie. After all, James Baker was Secretary of State at the time.

It seems it did happen.
https://en.wikipedia.org/wiki/April_Glaspie

I seem to recall that Kuwait and Iraq had some disputed border territory that was also rich in oil. Plus Kuwait was antagonising Saddam by over-producing oil and keeping the price lower than he wanted.

Would things have turned out differently if he had just simply occupied the disputed terrotory?

I should think it was very much their desire to do anything but let her finish the job. Those wets were a bad lot.