The Hard Dollar Cost of War 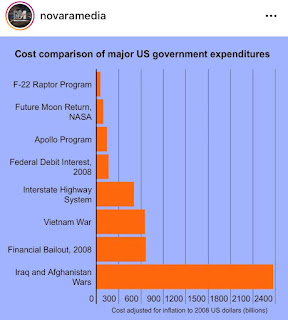 Let's assume the bottom bar is accurate enough to make the point (even +/-50% is enough).  What follows from this?  My thoughts run as follows:

** There's an interesting story here.  When the Ayatollah came to power in Iran, initially he headed off to Qom and didn't do much at all of substance; and people were beginning to wonder if he was just going to return to being a seminarian cleric.  What he actually did in the early months was instructive: he immediately stopped the Shah's huge expenditures on armaments, and redirected the money at the rather nervous population, who quickly concluded, hey, this isn't so bad.  He thereby literally bought himself breathing-space to plot an altogether more comprehensive takeover of most aspects of Iranian life, which he proceded to do.  (To be fair, invasion by Saddam the following year helped consolidate his position too: and he may have regretted some of those cancelled arms shipments.)

Where would HS2 be on that ?

The Biden administration certainly seems to be coming *just* as there is a ramping of tensions over Alexei Navalny.

Would the BBC be banging on about a 150 person riot anywhere else ?

What else could Biden spend the money on?
Seriously?
The whole reason the Washington establishment is behind Biden is he is liable to start more wars, after 4 years of Trump not starting any.

Interesting source of "information". Funded by the Rosa Luxemburg Foundation

"The Rosa Luxemburg Foundation named in recognition of Rosa Luxemburg, occasionally referred to as Rosa-Lux, is a transnational alternative policy group and educational institution, centered in Germany and affiliated to the democratic socialist Left Party. The foundation, which was established in Berlin in 1990."

Hence the caveat on the numbers

Biden has already rolled back into Syria. Not sure how the YPG feel about it after being left to deal with Isis and Turkey.

Biden's nominee for SoS seems to be *congenial* to the Republicans, too ... (China, Israel, illegal immigration etc)

Or perhaps how wealthy is a country that can print money and get everyone else to accept it? Would the USA be able to afford all this extravagance if the dollar wasn't the global reserve currency? What if one day it isn't?

Interesting people the Afghans. Had a little book written by an old style colonial soldier from the days when the Army did ethnological studies. One snippet told that a tribesman would think nothing of hiding in a thicket for days just for the opportunity to sneak out silently and knife an enemy. The politicians cannot say they were not warned.

' "Trading is better than fighting", as I was brought up to believe by my father (who saw WW2 from the sharp end).'

Me too. But still he taught me to shoot on the impeccably logical argument that "Next time the Germans might be Russians".

Jim - much like the Baluch, from a similar part of the world, see my story here
http://www.cityunslicker.co.uk/2016/11/weekend-post-drew-in-oman-2.html

have them on your side!

dearieme - it was basically the Germans for my father, though he was limbering up for the Japanese when it all came to an end

he hadn't reckoned on being called up from the reserves for Korea! (but he never actually went out there, rather to his relief: he was a married man by then)

all my training was for the Russians; but it had its uses elsewhere (to be continued shortly)

"it was basically the Germans for my father, though he was limbering up for the Japanese when it all came to an end"

Mine too. After the Jap surrender he was redirected into service in Intelligence, which seemed odd to me since he spoke Latin and French but not German. No doubt the army knew what it was doing, ho, ho.

"Avoid war! How many monarchs screwed up their chances by being altogether too keen on fighting? You need to be really good at it - Julius Caesar, William of Normandy - to make it pay."

But if you can persuade some other mug to go to war, not in his interests but yours, that's a winning strategy. What were our interests in Gulf II?


I see the EU are really peeved with AstraZeneca, btw.