Yates to the rescue? 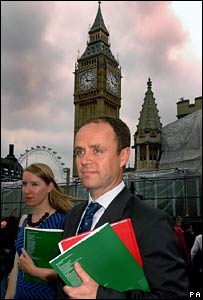 So at last Yates has handed in his report. I am sure there will be much comment elsewhere, but this could be just what the Tories need.

Blair can't resign now with this hanging over him. So he is here for a little while yet. I don't think this is very good news for the country as a whole which has suffered badly with a lame duck Prime Minister.

However it is good news for the Tories. Sleaze will stick this time and this is a very serious accusation. It won't do Brown any good and will prove a real hindrance to the Labour chances in the the crucial elections this year.

As I have said before however, it won't be good news in the long-run; the Westminster set will use this as an excuse to end private fund-raising and to vote themselves luxury lives at taxpayer's expense.

We live in interesting times though, politically speaking.
Posted by CityUnslicker

I'm still not certain anything at all will come of this because Labour still have a few years in power and they have filled the civil service and every other post possible with their own placemen.

Now it has gone to the CPS it can take months to resolve into even a case.

Bliar will go in June/July and be abroad when any announcement is made so as not to get caught up in any media storm.

You may well have a point there shot; but we will see. I think he has to stay now longer than a couple of weeks.

Unless there is a massive whitewash!!

Unless there is a massive whitewash!!

That's his usual MO, and don't forget that the AG can block any prosecution, and I think would regardless of the fallout.

Interesting times, indeed, c/u. I don't see how Blair can go with this hanging over the administration either. I agree with you that the "Westminster set" will eventually turn it all to their own advantage - and the same people will pay for it as ever.

It all keeps them on the defensive CU they cannot attack the Conservative Party on the grounds of a percieved selfishness with this is sort of background .

I `ll have to have look through it later. I share your horror at the idea of tax payer funding though. I wonder what the develoipment of soft funding will do to the Conservative limited individual contributions could be a bonanza for Doughty street say .

Every which way we're bollocksed.
Whatever Blair does, on any issue, you can just guarantee that the British people end up getting shafted. The reason ? Parliament exists for Parliament alone.

Why not let the main parties go bankrupt ? What better expression of people power is there than that ? Let new parties evolve that aren't in the pockets of corporatists but which are funded from membership like they used to be.