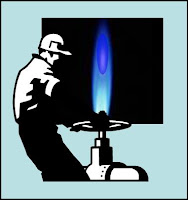 For all those gentle readers who quake at the thought of being dependent on gas from the kindly Gazprom, three entertaining recent news items:

1. "In the near future there will be a deal to further increase the customer base on the British market. Anyone who will be in for the tennis tournament will know about it." Alexander Medvedev told reporters at an economic forum in last month. And the deal is . . . (drumroll) . . . no not Centrica at all, it’s, ahem, Natural Gas Shipping Services, a small, Cheshire-based gas-distribution business. So although the crowds were much impressed, the Takeover Panel can go back to sleep.

Keep up at the back, we’ve said this before: Gazprom doesn’t pay cash for anything much more expensive than a bus ticket: much too shrewd for that - it’s “asset swaps” all the way. Which probably won’t cut much ice with Centrica’s cash-only shareholders.

2. On the other hand, the Russian Parliament has authorised Gazprom staff to carry firearms ! What isn’t mentioned is that this merely ratifies custom and practice. How do you think they deliver the gas bills to distant, warlord-controlled parts of the empire ? (like )

3. And to cap it all, this week it is announced that western oil companies will be allowed to participate in the gargantuan Shtokman project after all ! Now there’s a thing. And there was us believing Gazprom when they said they were going to do it all on their own, and not develop it as LNG after all. Suggestion: the “lucky winners” – Chevron, Total and Statoil – might want to have a little word with BP and Shell about their experiences first, though.

Back home again to our own long-running story of commercial gamesmanship in the energy sector . . . here and here we’ve commented on BP’s little games over the bung they’d like, to encourage them to play ball with NuLab on carbon-capture. And now we learn that they and their friends would like £ 1 billion sub from HMG to get them to join the game.

Cynic ? me ? no, no, I believe them implicitly.

If you're thinking of waiting until the last minute, may I beg you to reconsider. Though we gave a date of Friday evening, the longer our members refrain from voting, the longer we are preserving the agony.

May I humbly and respectfully ask that you don't let it go that long but get your vote in soon so we know what is happening?

This may be going a little over my head CU.

The hitch has both a tokarev and a makarov in the cabinet should I be called upon , sadly deactivated but *coughs* easliy re activated

I've been writing about Gazprom too, we do need to keep our eye on it, it is worrying.

What is the marquis talking about?

OK - how do you pronounce Shtokman?

makarov - Hithc what a piece of kit.

As for gazprom - the world is rapidly becoming more protectionist and this is a huge threat to us as the most exposed large trading nation.

Ellee - have you posted recently on Gazprom ? You did something in March as I recall

Mutt - the Russian is Штокман, and you pronounce it as you would imagine (given that the Russian 'H' is the western 'N')

However,Gazprom is not pronounced the way westerners tend to do: the emphasis should be on the second syllable, the flat 'O'.

(If it were on the first syllable, then you'd have to say 'Gazprm' or 'Gazprum' with almost no articulated 2nd vowel, because the Russian 'O' is only articulated as such when emphasised.)