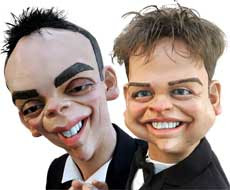 It took almost all day, but I thought long and not too hard and came up with a way to balance government spending with government borrowing.
Not only that, but it actually engages people in the democratic process. not only that, it makes money!

Ok, here's the deal.
Every Saturday night Ant and Dec front a mixture of Britain's got talent, Big Brother, Dragon's Den and X factor.
A panel of judges from political parties, business, trade union, media + a few regular people from the real world get to vote on.. sectors of spending.

There's a big lit up board that shows tax receipts / spending /money returned to taxpayers in a bar chart form. Departments present a short film of why they deserve funding. A film of cancer care centers, a shot of an ambulance, a child in an incubator, a woman with a new hip.
[tears in the audience].
Then the counter argument Poly Clinics/ MRSA/ a one size fits all pay deal regardless of income/ Cleanliness/ projected health costs/ trans gender operations/cosmetic surgery/ administrators as a % of the NHS staff budget.. and so on.
The judges debate and Simon Cowell and Paxman and the Dragons pull bits apart and then the studio audience and you the viewer at home, get to vote the spending through.Or not.

"Tonight Aircraft Carriers at £4 billion. But that's without planes isn't it?
Erm yes.
And without sailors?
Erm yes.
And without small support ships and larger docks?
erm..
so give us your real ready to roll price Ministry of defence?
Erm £25 Billion.
Ohh they didn't like that did they Ant? No Dec, they didn't. Well let's ask the audience..They want the money spent on helicopters and housing for soldiers and increased combat pay..

Well you get the idea. Council leaders on £100,000, Health and Safety,new town halls, MP's expenses, Quangos, Green Taxes, speed cameras, diversity courses, the Eu, the Potato board, union modernisation, the arts council, the BBC, Airline fuel exemption etc... all must pass the Room 101 test.
If theyfail and go in, then that's it. No more state spending.

And when the public tires of the format.. do it on ice!
Posted by Bill Quango MP

Its a brilliant scheme I would love to be in the TV audience! I would propose that everyone in the country gets a million quid each in their bank account! I bet I could get that through!

I propose public execution of New Labour people, with tickets on sale to the public. It'll raise public morale and a tidy sum.