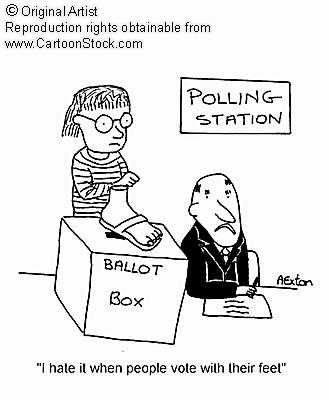 What an amazing result

This is an unmitigated disaster for Labour which will surely have serious repercussions for the Cabinet and possibly Mr Brown.

It is not possible for a political party, that has a history in Glasgow East of returning Labour MPs for over 60 years , to have such staunch support dissolve without consequences.


Mr Brown has a limpet like ability to cling on, so I would expect Mr Darling to be the fall guy.
Ed Balls should be scapegoated too, but that's unlikely.
As for the SNP this is their 'Obama' moment.
They have the big Mo and will likely decimate Labour at a national election.
Scottish Independence takes a step closer to realisation.

Tactically Labour have themselves to blame for negating the incumbents advantages.
Quite why Labour called a By Election so quickly and so poorly is a mystery [waiting to be answered in a few weeks by MPs published expenses perhaps David Marshall?]

* Call a snap by election. Why? there is the whole summer recess to bury bad news.
Labour took a long time to get going in Crewe, so don't repeat that mistake.
* Calling an election without a candidate? Why? Basic recruitment No1. Don't announce the new person until they confirm in writing.Keep it in the dark, you may need to call back the No2. Shambolic start for Labour and a gift to the other three parties.
*Announce an election over a traditional holiday week. [possibly they wanted a low turnout, but its still a bad idea]
* Announce a work for benefits in one of the most deprived areas of the country, days before voting takes place.
*bashing Margaret Thatcher in leaflets when you know that there are hundreds of pictures of your leader sitting down to tea with her.
*having a meeting with your creditors [the unions] the day after a very public, damaging, credibility destroying humiliation.

We thought that the London elections were badly handled by the PLP. Throwing away their natural advantages in Glasgow East begins to looks less like incompetence and more like panic.

Well the panic will probably get worse. 325 Labour Mps now know that they may soon be unemployed.
Posted by Bill Quango MP

Darling will be the fall guy, Miliband will be promoted, Brown will pretend he has a chance at the next election.

It's not the economy this time though! The economy is shit, but that isn't the only reason people are pissed off, people are angry because Brown is so crap at being PM not just because the credit bubble has burst. Changing chancellor won't even help because we are far away from the bottom of this slump. Labour are stuck and Brown should announce a leadership election to be followed immediately by a general election.

Pardon my French (just making up for yesterday's German)

Sarah Brown is out and he's getting a super model in.

"Well, it worked for Sarkozy"

Perhaps it's time for someone to write a book entitled:

"101 Uses for an unemployed Labour MP"

along similar lines to

Only be quick about it, since there's going to be a big demand for it.

calm down comrades - a year ago Labour won ealing and southall. We are not out yet.

John Gray nice to see you hear and welcome. I agree a year is a long time in politics. But I remember the Tories said this in 1995/6 too....