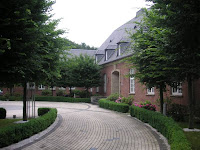 A short, partly nostalgic trip last week to the Ruhrgebiet / Niederrhein, where I spent happy days as a subaltern in the heyday of the Cold War. 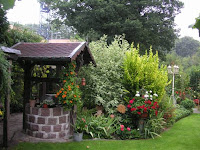 home, declare it a listed building, and turn it into a conference centre

. . . would municipal allotments be turned over mostly to growing flowers in ornate little patches like this 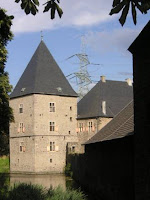 . . . would an electricity pylon be placed in the grounds of a Wasserschloss 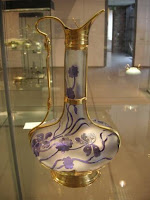 . . . would a little town like Zons (pop. 5,405) have a museum with a world-class collection of Art Nouveau glassware 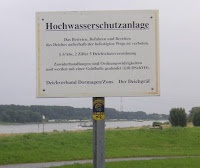 . . . and would a riverside dyke be called a Hochwassershutzanlage . . .

Photos © Nick Drew 2008; and, not for the first time, German spelling corrections courtesy of M.Wadsworth

Whoever owns this blog, I would like to say that he has a great idea of choosing a topic.

The museums are astounding aren't they. The auctions are good too; there are the most beautiful bronzes, nothing grand but very fine, that can be afforded. I'm very fond of the small animals whose collective name I daren't try and spell. A particularly fine bronze snail stands between the bronze busts of Marx and Lenin on a sideboard at home as an expression of the pace of the advance of the Revolution.
In my next life I shall try to spend much of it in Germany.

Thanks, chaps, sorry it took me so many goes to get the damn' formatting right

thanks also for the sp, Mark - correction made and acknowledgement given, as before !

Sackers - not so much Heimweh as unheimlich, wandering around the Mess again, I can tell you (which is odd, really, because it was home ...)

With apologies to the German language on that one. To think I used to be semi-fluent!

Mark, ze past, it iss another country, nicht, and one cannot go zere.

Apologies for posting this as a comment, but I couldn't find a contact form or email address.

This is just a quick note to let you know that your blog has been included as a Trusted Source on the Politigg news site.
http://www.politigg.co.uk

This means that Politigg will provide a direct link to every article you write, including a brief snippet to get readers interested.

Politigg aims to allow you access to the best political articles from across the web, as judged by other members. Many of the articles are gathered automatically from the extensive list of trusted sources, but users can also submit articles that they find interesting or useful. There are currently around 400 political websites monitored for new content:
http://www.politigg.co.uk/feeds.php

To get the most out of Politigg, I strongly advise you to read the one page Quick Start User Guide which covers all the main functions.
http://www.politigg.co.uk/html.php?id=guide

Suggestions for new blogs, news sites and political groups to include in the trusted sources list are most welcome.

If you would like to link to Politigg, there is a range of buttons and text links available here:
http://www.politigg.co.uk/html.php?id=links

Or, you can add a voting widget to each of your articles:
http://www.politigg.co.uk/html.php?id=widget

The tortoises are Rosa and Lenin, ND. I have a carpet (one of a stock held by the GDR as state gifts to visiting heads of state), with Rosa woven into the centre panel, but no bronze; she was never important enough in the pantheon perhaps. There is also a fine set of papier mache masks of all Soviet leaders since Lenin with elastic at the back like on my school panamas, with which to liven up a dull evening.

I didn't have you down for a soldier, Nick. When at RMAS, who with thereafter, etc?

France has some remarkable industrial museums - as has Switzerland. I remember walking round the Schlumpf collection at Mulhouse very shortly after it was discovered. Staggering numbers of Bugattis of phenomenal value. Then afterwards over the border at Basel, my favourite city, and on to the Transport museum at Lucerne.

What gets me is that, generally, they do look after their infrastructure and built environment. Walk around many of our ancient towns and cities - and weep.

Unsworth - generally, they do look after ... - up to a point: also visited the amazing town of Hattingen which is in fantastic fettle: but (for example) Zons, the little town in the photos, is not everywhere in very good nick, museum and marching bands notwithstanding (the once-splendid windmill on the city wall is not at all happy)

and the last time I was in Hannover, the main municpal mall was in a shocking state of dereliction, whilst still open for business

Anyhow: mid 1970's; RCT (at time of being in said Mess); followed by Green Slime

I'm not going to drag up my megre German with so many expert readers.

I really enjoyed living in Germany (Celle) and find the Germans to be, by and large, great people. Most people I know who lived and worked there say the same.

So why do our tabloid press make out the we all hate Germany and the Germans?

GS - yes, Celle (another military destination of mine) is wonderful, even if a bit close to one of the less comfortable manifestations.

Mutt - I expect your Italiano di Strada is pretty awesome too

"I conduct ops here under a nom de guerre"

Oh! I thought that was mandatory.

RCT eh? Apparently the antidote has been found.

I was at Longmoor when it was formed.

See: http://timesonline.typepad.com/mick_smith/2008/04/it-wasnt-like-t.html for the current state of play.

Nick, could you expand on the comment you made on meeting the fine fellow Brigadier Attack?