It's the Labour/Tory economic face off... 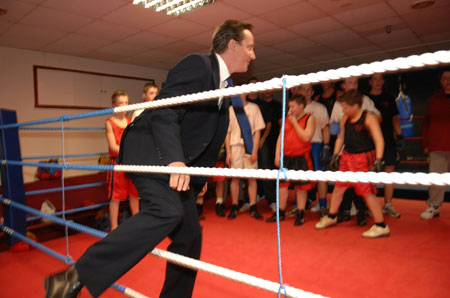 A strange week in the world of UK economic policy. Alistair Darling has decided that there should be no more tax rises; So brave Badger after all these years of increasing the burden....

On the other hand his Master, Gordon Brown, has decreed that the Treasury look to relax fiscal rules to allow more borrowing. As much as this is final proof of the way they have mismanaged the economy, it is also the right thing to do. As I posted last week it could be the economy crashes utterly. the last thing to throw into that mix is huge public spending cuts and more unemployment etc. But no more than is necessary to current commitments only.

So what has been the Oppositions response? Two ideas have been floated this week. One is to make the Government accountable to an independent body for its spending. This is a great idea if you are about to lose power and would have been fantastic in 1997. However, in 2008 is this really the answer?

In some ways it irros discussions about the NHS - at the end of the day we vote for politicians to enact spending policy, make laws and start/end wars. To pretend that somehow an independent body should be in charge is an affront to democracy and also says how little politicians trust even themselves.

Secondly David Cameron said on Marr this morning that he would be open to tax rises should the need arise in 2010 when he is elected. Again, this is poor posturing, it is one thing not to lower spending in a downturn, quite another to advocate increasing the tax rate. There is plenty of scope for reducing waste and no room for raising taxes at all.

The Conservatives are at last putting forward some economic policies, but they are still very lacking on detail and clear thought. This kind of approach won't win them an election and instead Labour will begin to close the gap unless firmer, more intelligent suggestions are made.

Here are some easy ones:

List 100 quango's to scrap and put the savings into local government
Say that all the wasted IT projects, ID cards etc, will be ended.
Define the green taxes and the trade off to income tax/personal allowance.
Merge NI and Income tax and increase personal allowances.
Posted by CityUnslicker

I think DC had it right the first time when he said that he couldn't rule out tax increases because he didn't know what the situation would be like in 2010. That is quite different from actually advocating them.

Last one is a bit scary CU..

Unless you exempt the over 60's/65's or whatever retirement age is now/then all those pensioners facing an 11% tax hike.

NI starts at £105 PW
To merge them would add in a lot of the P/T jobs and weekend jobs which are the lowest paid. I see the bit about personal allowances, but its a big tinker.

+ Employers NI contributions, the scandalous tax for taking someone off the governments hands? What tax receipts lost would that be?

its one for the future as its complex.
The others..Quangos [surely not?] and IT are the easy first targets.

One should also remember that 'Yes' is a pretty short reply, too. What does Darling really mean by 'no more tax rises'? Direct and indirect? For how long? And we should not forget the source of this 'story' - Al Beeb.

That's the problem with zero credibility - it comes back to bite you.

Dearime, Quango - yes you are right, which is why it goes hand in hand with raising the personal allowance.

All sounds a bit SNP, except for the last one. Why did we get Brown and not Salmond if it must be a Scotsman?
Salmond seems just what Labour voters tend to vote for. Though yes, they voted for Brown - oh,no they didn't. No one has ever voted for him except some local constituency Scottish bought and paid fors.

So, on top of abdicating most policy making to Brussels they now want to abdicate responsibility for spending to an independent body.

Is there any anything left for them to do that justifies the huge salaries and expenses?