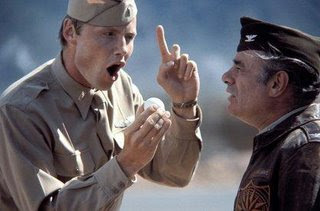 Milo's M&M Enterpises syndicate is selling seven-cent Maltese eggs to the mess halls at a price of only five cents an egg while still making a profit.

However, it turns out that Milo's Maltese eggs are actually one-cent Sicilian eggs which he has secretly shipped to Malta to drive up their value, yielding him another three and one-quarter cents profit per egg.

But Orr crashed into the sea and when the crew went to inflate their life jackets..
The life jackets failed to inflate because Milo had removed the twin carbon-dioxide cylinders from the inflating chambers to make the strawberry and crushed-pineapple ice-cream sodas he served in the officer's mess hall and had replaced them with mimeographed notes that read: "What's good the M & M Enterprises is good for the country."

Chaplin: Cheer up Yossarian. Milo's selling oranges and the syndicate is making so much money.
Yossarian: We won't see any of that money. We won't even see the oranges.

We will borrow our way out of the borrowing hole

I reckon the chocolate coated cotton Milo got left with, is the stuff they're using to poke in the cheeks of Grodonn Bruin as they're all pasty and with no substance.

They can stick it everywhere else as far as I'm concerned.

Somehow, I now have a recall of Private Frazer with embalming fluid plastered all over his face to make him look younger...

Scrobs: That is a truly hideous image.. But has the tone of old Frazier. Did you hear him getting a little Miss Jean Brodie on that report on his summit today?

"Then I'd be mad not to," Yossarian said.